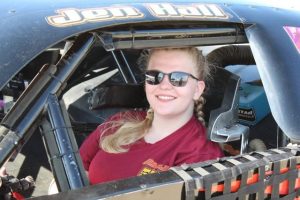 Following Danica Patrick’s retirement from competitive driving in 2018, women have mostly slipped into the shadows in the male-dominated auto racing world.

However, a pair of Arizona drivers are hoping to be among the next women to break racing’s gender barrier, and Tucson Speedway is helping pave the way.

“We have about eight to 10 females that race at our track every week,” said Tucson Speedway promoter John Lashley. “It is a great number because out of every week, we usually have 80 cars. So if we have 12-15% of them female, I think that’s pretty good. That certainly is a demographic that has been building at the speedway.”

Nicole Grote, a 21-year-old from Surprise, and Tucson’s Jennifer Hall, 19, are two Arizona women leading the effort to break through. Grote began racing at 10, driving Go-Karts. After taking a break from the sport, she returned with support from her family.

However, she realized at the grassroots level she had to overcome the obstacle of being a female racer.

Since NASCAR began in 1949, the organization has only had 121 women qualify for and start a race in any of its series. Only 16 women have ever raced in a NASCAR Cup Series event. That’s less than 4% of all the drivers who have ever competed in a Cup Series race.

And no woman has yet to stand on the podium at the end of any of the three National Series, with Patrick’s 2012 10th place in what is now known as the Xfinity Series being the best finish in the final standings by a woman. Patrick is also the most successful woman in open-wheel racing history, and her victory at the 2008 Indy Japan 300 remains the only IndySeries race ever won by a woman.

Even though a female racer has not claimed a title on NASCAR’s biggest stage to date, that fact doesn’t deter women like Grote and Hall.

“Most people do not think females can do something I can do,” Grote said. “It’s extremely hard because I have to prove myself by standing my ground and showing that I do not put up with them.”

Like Grote, Hall found herself on the track at the age of 10. Nearly a decade later, she still feels outnumbered from the moment she steps into the driver’s meeting before a race.

Hall has experienced the double standard that women face in all sports.

“When you are trying to promote yourself, you typically go to social media,” Hall said. “But, if I was to post a picture, I have to make sure that the lower half of my body is hidden. If I were to post a picture, I would get comments about my body, and that is distracting from one’s ability to race.”

Women in racing, whether they’re competing for fun or with the ambition to reach the NASCAR level, can begin to believe they can’t compete and give up because of the outside distractions, Hall said.

Despite the double standard and the doubters, the female racing community continues to try to crack through the barrier.

In addition to her family, Hall has benefited from 23-year-old Kelsie Foley as a mentor, who has helped her navigate driving and dealing with aggressive racers on the track.

Meanwhile, Grote joined Go Fast Girls, a small family company that supports female athletes in racing. Although Grote is still racing at the local grassroots level, she partnered with the company after they reached out to her.

“They wanted me to be a part of their team and promote me,” Grote said. “After looking into it, I went for it. Ever since I did, it has been really good because we can help each other out. It’s like a big family that you never knew you would have.”

And Tucson Speedway is doing its part to help women who want to race. The track is an easier three-wide track, meaning there is room for three cars to run alongside, making passing easier, Lashley said.

In addition to the wider track, Tucson Speedway provides an opportunity for females through the Bandoleros division, Go-Karts with a fiberglass frame.

“The Bandoleros is how we really started the females racing at our track,” Lashley said. “We started with the Bandoleros, and we have girls now that are starting to move up to Hobby Stocks, trucks, and other types of competitive cars.”

Off the track, Tucson Speedway promotes its racers through multiple media outlets in Arizona. Although the track promotes all racers equally, the female racers are grateful they have the chance to be included in the promotion effort.

Since Tucson Speedway began boosting female racers, they have become a hotbed for top-tier racers.

For example, Hailie Deegan, a woman competing in the NASCAR Camping World Truck Series, raced at Tucson Speedway just two years ago. Plus, female racers from Chicago, New Mexico, Texas, and other regions travel to Tucson to compete at the track throughout the season.

It’s a sign that the female racing scene is growing at Tucson Speedway, and the next woman to become a star at the NASCAR level just might get there by driving through the Old Pueblo.