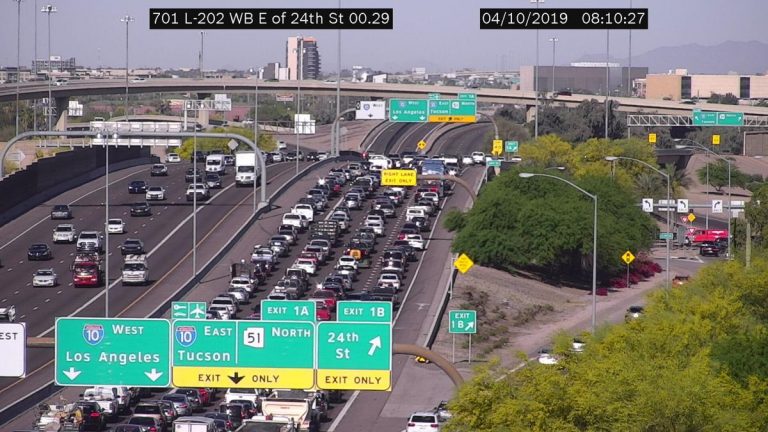 Traffic has returned to metro Phoenix in a big way, causing delays in morning and afternoon commutes and increasing carbon emissions in an area that has long-standing problems with air quality.

During more than a year of working from home, taking online classes and holding events virtually, the lack of traffic made driving a relative breeze, particularly during traditional rush hours. But the period of leisurely commuting – Valley drivers in 2020 spent the least amount of time in traffic since 1982 – is over.

According to Wang Zhang, transportation data program manager for Maricopa Association of Governments, traffic is back to pre-pandemic numbers. In mid-April 2020, he said, traffic in Maricopa County was 61% of normal.

By March 2021, traffic in the county was “fully back to 100%,” Zhang said, but he pointed to a silver lining: Congestion hasn’t returned to Valley roads.

“In that measurement, actually we are not back to pre-COVID conditions yet,” he said. “At the end of August, the latest was at about 55% of the congestion level.”

Zhang credits changed travel patterns and the completion of more road projects for the lower congestion.

But with vehicles returning to the road, tailpipe emissions are on the rise.

In 2020, carbon emissions in the U.S. dropped by 650 million tons, a 12.9% decrease from 2019, according to Nature.com. But the relief was short-lived as people returned to work, school and traveling.

Tailpipe emissions are one of the largest contributors to air pollution in large cities, and Phoenix ranks fifth in the nation for unhealthy ozone days, according to the American Lung Association’s State of the Air 2021 report.

Matt Pace, a meteorologist for the Arizona Department of Environmental Quality, said air quality in Phoenix has continued to improve since the Clean Air Act Amendments in 1990. But challenges remain with improving air quality conditions in the Valley, which includes Phoenix, the fastest-growing big city in the county, and one that was built to accommodate cars.

The ADEQ monitors ground level ozone to report air quality conditions. Ground level ozone, or “bad ozone,” is created by volatile chemicals and particles in the air reacting with prolonged hours of sunlight, creating unhealthy conditions. People with lung conditions, such as asthma, are at highest risk, although high ozone levels can cause airway inflammation and chest pain even in healthy adults.

In Arizona, vehicle emissions did decrease during the pandemic, but not for long. Nancy Selover, who was the state climatologist at the time, told Cronkite News in April 2020 that the drop in emissions temporarily contributed to the reduction of the “brown cloud” that typically hovers over Phoenix, especially in winter.

Pace said the short period of reduced emissions did not signify measurable improvements in air quality because last year was marked by anomalous weather conditions, including smoke from wildfires raging across the Southwest.

Pace made multiple recommendations on how individuals can reduce their own emissions: “telework if you can, carpool as much as possible, take public transportation.”

“Anything that you can do to reduce carbon emissions is a good thing.”

Sometimes good comes from bad. The pandemic presented challenges that introduced new ways to get things done, such as learning and working from home instead of a school or office building.

“People always think that doing small things won’t make a difference,” Pace said. “Well, we always say, if everyone does that small thing, it adds up to a big difference.”

Reporter Isabella Fredrickson with Cronkite News contributed to this story.

PrevPreviousOpinion: Does the US Have Political Prisoners?
NextMinor Family Legacy Supports Forestry in Arizona and WorldwideNext