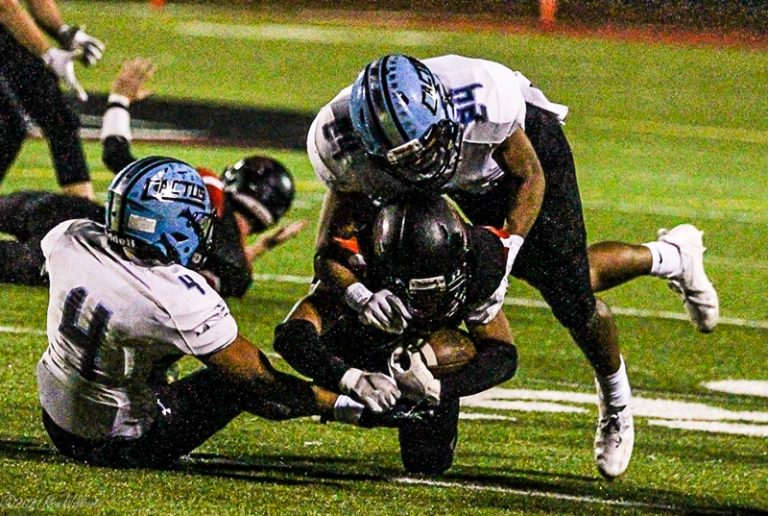 Photo: 4 Ruben Solano gets tackled by a pair of Cobras

Despite missing their head the coach, the Prescott Badgers beat the Washington Rams 56-18 in Phoenix last night.  Coach Collett suffered a heart attack and will be out, till he and his doctors feel it is the right time for his return. In the meantime, assistant coach Branden Johnson will be guiding the Badgers.

The Rams struck quickly, taking the opening kickoff 88 yards down the far sideline by Demetrius Harmon. A bad snap cost the Ram a chance to tack on the seventh point, leaving the score 6-0.

The Badgers got busy quickly moving the ball down the field, capped off by a nice zigzagging run by Cody Leopold. Cole Gross added the kick for a 7-6 lead with 8:44 left in the opening quarter.

After each team had some hiccups, aka penalties, Prescott took the lead on Cody Leopold’s second TD run with 2:44 left in the first quarter, after a blocked punt set the offense up at the Rams 40.

Washington struck back on the very next offensive play when Gabriel Segovia hit Kewade Hillman on a slant pattern, going 75 yards to the house. The two point attempt failed, leaving the Badgers up 13-12.

After a Badger punt, the Rams picked up another big play touchdown, as Harmon bolted 79 yards down the middle of the field. The run for two failed again, but Washington now had a 18-13 lead two minutes into the second quarter.

Prescott would score four times in the second quarter to take a 23 point lead into halftime. Cervando Vega setup the offense inside the Rams 40 with a good kickoff return, but a holding call put the ball back at the Prescott 41. The Badgers were able to gobble up yards, finally scoring to take the lead on a 5 yard run by Cody Hanna.  Jake Hilton ran a sweep down the Badger sideline for 46 yards to make it 26-18. Hanna scored a second time from one yard out and finally Jaxon Rice threw his first touchdown pass of the season to Landen Aurich, his first of three TD receptions on the night.

Leading 41-18 at the half, the Badgers opted to go with Alex Vaughan at quarterback. Vaughan had been under the weather, resulting in Rice getting the start. Vaughan showed no signs of weakness, competing 2-3 for 68 yards and a pair of touchdown passes to Aurich. Rice finished with 92 yards and a TD in 5-10 passing.

Cody Leopold had another big game rushing for 176 yards on 22 carries and two TDs. Cian McKelvey hit the century mark on 16 carries. Prescott as a team rushed for 385 yards in the contest. The “O” line of Noah Coroneos, Landen Francis, Greg Bickel, Nathan Norvel, Macrae Kasun, and Christopher Brown took it to the Rams creating numerous opportunities for the backs to succeed. Landen Aurich’s receptions all went for touchdowns and 111 yards.

Defensively, it was the Cody’s in Hanna and Leopold who led the Badgers in tackles, combining for 17,

Prescott improves to (3-0) and will travel to Kingman next Friday to take on Lee Williams. Washington dropped to (0-2).

The term speed kills was true to form Friday night in Prescott Valley as the Cactus Cobras had plenty of speed to beat the Bradshaw Mountain Bears 56-13.

It was the home opener for the Bears and they were put up against a team that finished 4A state runner up last season. Mesquite beat Cactus 39-38 to win the 4A championship.

Cactus (3-0) had already scored 112 points in their first two contests, but it did not look like they would get close to 56 points in the first half.

The Bears led 7-0 after the first quarter when Gabriel Ricketts plowed into the end zone from one yard out. The drive was setup by a Cobra fumble at the Cactus 23. The short field proved profitable, but unfortunately that would be the offensive highlight for the home team in the first half.

Penalties were the problem for the Cobras in the first half, but they did managed to overcome their own mistakes with 5:22 left in the half. Daniel Avila drilled Rameel Yaro on a 39 yard scoring strike to tie the game at 7.

On the following possession the Bears made a costly mistake on a punt, leading to the Cactus go ahead score with 2:55 in the second quarter.  Will Gavan bolted in from 18 yard and a 14 -7 lead. Bradshaw Mountain was lucky to withstand one final scoring attempt, as a pass from Galvan into  the end zone was picked off by Braden Shoemaker with :37 left.

Bradshaw Mountain received the second half kickoff, but struggled again on offense. The speed of Cactus, and physicality on both sides of the ball was starting to wear on the Bears.

Galvan, who finished with three rushing touchdowns, scored the next two, rushing for 33 yards and 11 yards to make it 26-7.

Quarterback Grady Rose through a pass to Tanner Mitchell for a 68 score to pull the Bears to within 26-13, with 2:31 left in the third quarter.

The Cobras would score three touchdowns and three two point conversions running the score up to 56.

Bradshaw Mountain (1-2) will travel next Friday to face Youngker, while Cactus will also be on the road at Sunrise Mountain.

The Badgers made it three in a row with a 3-0 sweep over the Marcos de Niza Padres, at Prescott High School.

Prescott improves to (4-3), while Marcos de Niza drops to (2-3). The Badgers will host Lee Williams on Tuesday at 6pm.