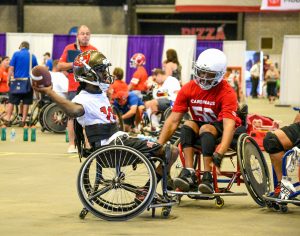 Justin Walker, a player for the Ability 360/AZ Cardinals wheelchair football team, has sensed the skepticism about his sport. Football is a fast-paced contact game, and for some, it’s difficult to imagine that it can be played in wheelchairs.

“When someone says wheelchairs and football, the first thing they think is ‘Impossible,’” Walker said. “For me and my friends, this has been our dream since we were kids.”

Walker and his friends recently played out that dream when teams from across the country gathered at WestWorld of Scottsdale for the first Move United Wheelchair Football Tournament of the USA Wheelchair Football League. The tournament was played in conjunction with the Phoenix Abilities Expo.

“(It’s) a group of guys and girls getting in chairs and strapping up to play football,” Walker said. “For this tournament, we are trying to change minds and show people the impossible.”

In 2019 Move United, a non-profit that operates parasports in more than 200 communities across the country, announced the formation of four wheelchair football teams in Chicago, Los Angeles, Kansas City and Phoenix. After building relationships in the four cities, the organization expanded into the USA Wheelchair Football league modeled after the American Flag Football League.

Even though it is technically a touch game, players dish out vicious hits and take on physical blocks on every down – and they do it all in wheelchairs.

“For me, I’m always up for challenges and football is a challenge itself,” Walker said. “But now you throw a chair in there. … You throw 14 chairs on the field, and it’s like bumper cars on steroids.”

It makes for an inspirational show. But Ability 360/AZ Cardinals player-coach Nick Pryor said it’s about more than inspiring. It’s real football for those who play.

“Disabled sports are usually inspirational, but it’s not that way to us,” Pryor said. “We are athletes that happen to have a disability, not disabled athletes. We are trying to put that out there to the universe.”

More than 100 athletes and cheerleaders took part in the inaugural tournament. Although they smashed each other during the game, they bonded together afterward while sharing a common goal: to spread awareness and build a community.

“To have friends, family, and people who don’t even know what wheelchair football is, and come out and be able to see this and be amazed at the energy and big hits, it’s great,” said Angel City Sports/LA Rams player-coach Bart Salgado. “It makes this all worthwhile.”

“Just to be able to travel where other athletes are and have good conversations with people who live life to their fullest and work their hardest, it’s inspirational,” Adams-Davis said.

Most of the players, teams and cheerleaders traveled thousands of miles to compete in the tournament. For teams like the Angel City Sports and Hillsborough County Adaptive/Tampa Bay Buccaneers, they came to claim a national title. However, other teams hoped to gain valuable experience.

For example, Adaptive Sports Ohio, based in Cleveland, opened the eyes of its players and staff to a whole new world by taking part in the event.

“Our goal was to be here and represent Cleveland, Ohio,” said Adaptive Sports Ohio coach Brian Veverka. “A lot of our teammates have never been to Phoenix. A lot have never been outside of Ohio. And a lot have never even flown before. So it is a whole lot of first-time experiences.”

And organizers are already looking to spread the word and expand the league even further.

“It’s not just telling your family and friends, but telling their friends,” Walker said. “Everyone somehow and some shape is affected by a disability. You may not have one yourself, but you know someone who does. Just being able to speak about it and spread it can help expand the league.”

Over the past two years, the USA Wheelchair Football league has grown to more than 400 members with players, coaches and cheerleaders. Walker and others hope that the WestWorld tournament will inspire even more growth.

“It’s a sense of pride for not only them coming to our house, but we want the best facilities and to leave here thinking this is what it is all about,” Walker said. “We want them to go home and take things we did at our tournament and keep it moving.”

“After this week, you are going to get to see all the people who play adaptive sports … will want to play and start a team,” Pryor said. “It’s going to grow every year, and all these adaptive sports across the country will get funding to do stuff like this.”

Many of the teams are supported by NFL clubs in their community. The Tampa Bay Buccaneers agreed to support the Hillsborough County, Florida, team that competed in Scottsdale after coach Caleb Schillace told the Bucs about the wheelchair team.

“Myself and a couple of the other coaches reached out to the Buccaneers and explained what was going on, and they were on board,” Schillace said. “Wednesday before we left, they were able to send us off with a lot of different swag gear and had former player Dexter Jackson come out to send us off.

“They have been a great support system, and we feel like we are an extension of the Buccaneers organization.”

Arizona’s team is supported by Ability360, a facility in Phoenix that provides adaptive sports and fitness options for disabled people, along with the Arizona Cardinals.

The team wears red and black jerseys with white helmets, just like the NFL Cardinals often do.

“That relationship with the Cardinals is amazing,” Walker said. “We wouldn’t be wearing half of the stuff we are wearing without them.”

The Cardinals are just one of the Valley’s pro sports franchises supporting programs for adaptive athletes.

“It’s amazing to work with all of our local organizations and professional teams because it really gives our members and our team a sense of belonging to something like that,” Pryor said. “They want to learn more about it. It’s something special, it really is.”

Veverka said that when people get a chance to see wheelchair football, it will only continue to catch on and grow.

“I would not be surprised if 10 years down the road, we will see it in the Paralympics with some of the best athletes in our country participating,” Veverka said.