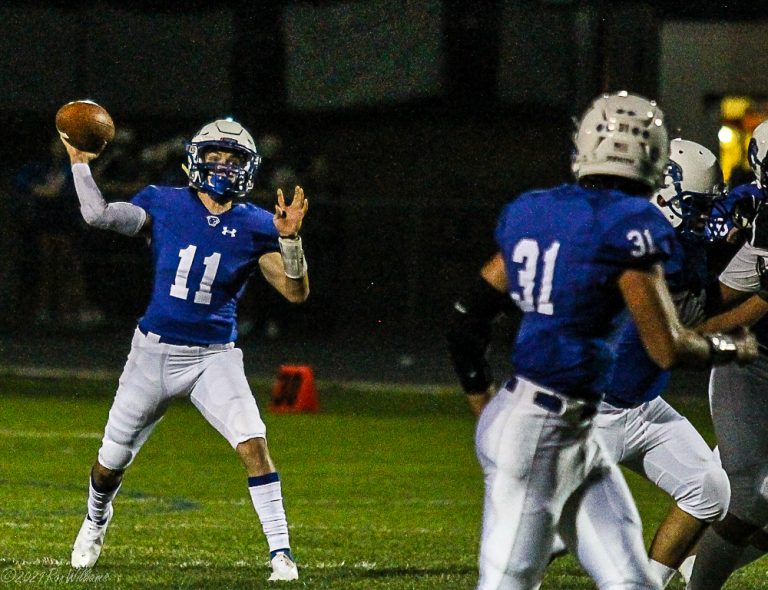 The Chino Valley Cougars were happy to play their first home game Thursday night, and took out the frustration of road losses out on the visiting Page Sand Devils.

A big crowd turned out and enjoyed the Cougars victory.

Quarterback Jayden Smith ran for 4 touchdowns and passed for another.

When Smith wasn’t running, he found WR Brody Ryan, who hauled in a 35 yd TD pass among his 5 catches on the night.  Receiver Ashton Loftin also had 5 receptions.

Running back Johnny Parrish had a 5 yard touchdown run. Smith and company enjoyed the offensive line led by Isiah Kimerlee and Mac Thomas, who both did a great job all night.

Smith scored his final 3:22 left in the third. Parish ran in the two point conversion for a 46-0 Cougars lead.

The defense pitched a shutout and was bolstered by ILBs Dakota McMains and Kaden Wagner. Each player spent a large portion of the night in the Page backfield. Safety Kaden Unzueta, cornerback Auren Stuller, and defensive end Grant Adkins, all had a great nights for the Cougar “D”.

Coach Mike Gilpin said, “Overall, it was a dominant performance from the first play to the last for the Cougars. 46-0 wins don’t come along every week, so this is one to enjoy. The Cougars had been very close in weeks 1 and 2 losing 33-20 and 29-21 to Payson and Phoenix Christian respectively. This breakthrough win can hopefully provide some momentum as they head into the middle of the 2021 season. The Cougar offense ranks as one of the most prolific in the state averaging almost 450 yards per game.”

Chino Valley (1-2) will travel next Friday to face the Warriors of Tuba City at 7 pm. It will be the third time in four weeks that the Cougars have been on the road. Page (1-2) will be hosting Holbrook.