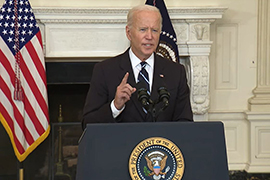 The new policy was announced by President Joe Biden as part of a six-point plan that will include mandatory vaccinations or tests for teachers and for workers in large companies, among other measures, to check the surging number of COVID-19 cases.

Biden’s school policy was quickly attacked as “dictatorial” and “un-American” by Ducey, who said last month that school districts which impose masking or vaccination requirements could not share in a $163 million COVID-19 assistance fund. Ducey cited a pending state law that will ban such health mandates as the reason for his plan.

“Today marks another egregious big government overreach robbing Arizonans and all Americans of their fundamental rights to make their own decisions about their health and the health of their children,” Ducey said in a prepared statement.

But Biden, without naming names Thursday, said school districts that are trying to keep their students safe should not have to put up with a governor who “picks a fight with them and even threatens their salary and job.”

“Talk about bullying in schools,” Biden said in his speech from the White House State Dining Room. If those governors will not help overcome the pandemic, Biden said he will use his “powers as president to get them out of the way.”

Under Biden’s plan, the Department of Education will make funding available “to help local school districts fill gaps when funding has been withheld by their state for implementing COVID safety measures.” It would be in addition to the $130 billion available to states, school districts and tribes under the American Rescue Plan.

Local schools will be able to apply for the new funds “in the coming weeks,” senior administration officials said in a briefing for reporters Thursday afternoon.

The proposal was welcomed by Arizona Schools Superintendent Kathy Hoffman, a vocal critic of Ducey’s plan to punish schools that require masks or vaccinations. She tweeted that the White House plan is “broadly supported by a majority of Arizonans.”

“Controlling the virus has always been the key to ensuring safe in-person learning,” her tweet said. “Enough political games – our focus must be on accelerating student learning and helping schools recover,”

Schools were just one element in Biden’s six-pronged “Path Out of the Pandemic” plan, that includes everything from increased availability of at-home testing kits to a requirement that federal workers and contractors be vaccinated. The plan will also mandate that businesses with 100 or more employees mandate vaccinations or require weekly testing of workers.

One Arizona health official said he believes the school section of Biden’s plan was driven in part by anti-masking efforts of Republican governors like Ducey.

“I think this White House decision was informed greatly by what Gov. Ducey did by disqualifying schools from funding if they are using masking as a mitigation effort,” said Will Humble, executive director of the Arizona Public Health Association.

The U.S. Department of Education announced last week that it had opened investigations in five states that have prohibited school mask mandates: Iowa, Oklahoma, South Carolina, Tennessee and Utah, all of which have GOP governors.

Ralph Quintana, the president of the 2,500-member American Federation of Teachers in Arizona, believes Biden’s latest move was exactly what schools needed.

“There are a lot of kids who have a high need to be in the classroom, and we must be able to do that safely,” said Quintana, an academic intervention specialist in the Dysart Unified School District.

But the funding element is not the only part of Biden’s plan that will affect schools, Quintana said. He says the vaccination mandate for organizations with more than 100 employees “will impact every district out there.”

Ducey has not been shy about criticizing the administration over its COVID-19 protocols, which he has called evidence of the White House’s “inability to effectively confront the COVID-19 pandemic.”

But critics have challenged Ducey’s plan to withhold funds from state schools and school districts, at least 32 of which had implemented indoor mask mandates as of last week, according to a list maintained by KJZZ. Quintana questioned the legality of Ducey’s proposal.

“What he was trying to do was ‘supplant funds’ and take away money from something he couldn’t,” Quintana said. “I thought it was a little humorous; who is advising him?”

According to the most recent data from the Arizona Department of Health Services, Arizonans under age 20 accounted for 18% of positive COVID-19 cases in the state – a number that Humble blames on Ducey’s decision to withhold funds from schools implementing mitigation efforts.

Humble said Biden’s plan focuses on longer-term solutions, and their impact will only be seen later down the road. But he does not foresee the dispute between the governor and the federal government ending soon.

He expects Ducey to “double down” in response to Biden’s action plan because he loves to “be obstinate when it comes to the Biden-Harris administration.”