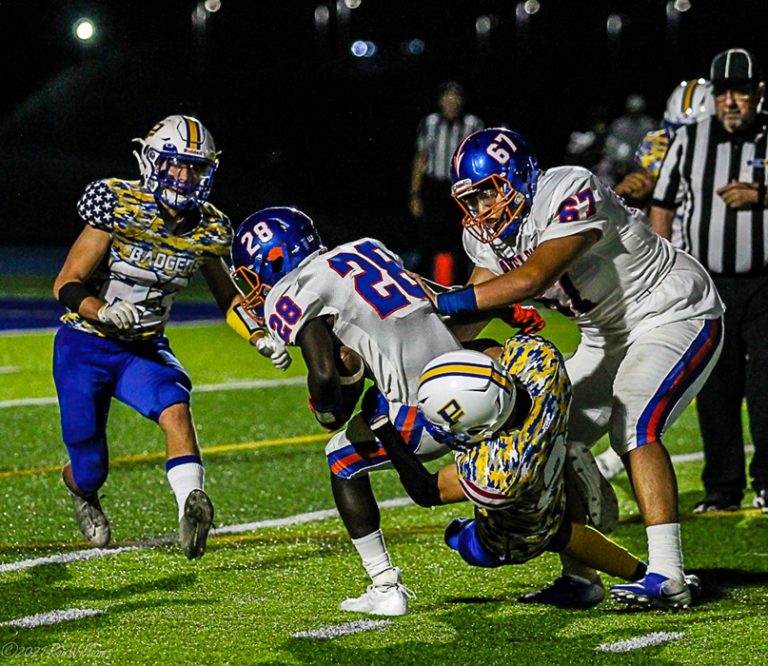 The Prescott Badgers had to overcome a crazy first half to beat the Camelback Spartans 30-20 on Bill Shepard Field. At one point, the officials laundry was visible so much that it became confusing to almost everyone, even the players and coaches, in which Badger coach Cody Collett was eventually ejected.

The game started with lightning striking, even though there was none in the forecast, as the Spartans scored on an 80 yard touchdown pass from Joe Martinez to Dejon Packard on the very first play of the game.

In what was an uphill battle throughout most of the game, the Badgers finally got over the hump in the fourth quarter.

Prescott did come back to score on their first possession, but a blocked PAT kept the score at 7-6. The TD came on an Alex Vaughan pass 13 yards to Ethan Ammerman.

The penalties began to become more often in the second quarter. Camelback scored again to go up 14-6 on an Amos Slokan 2 yard run. The Badgers were hit with 5 unsportsmanlike penalties, plus a couple of others, that chased Prescott coach Collett, who calmly walked off the field, dropping his headset on the ground as he never looked back towards the field.

Prescott was fortunate that the lone Spartan touchdown of the quarter, was the only score the visitors got. Camelback took advantage on that one series because they were assisted  with 45  penalty yards.

The Badgers managed to put together a drive to close within 14-12 with 2:26 left in the half. Cody Leopold scored the first of his three touchdowns on a 7 yard run. A two point attempt failed, leaving the deficit at two.

Prescott had what was a big chance to take a lead at the half but a holding call negated a Leopld run to the one yard line. Then in the final play of the half Jake Hilton got run over by the defender in the end zone on a pass by Vaughan, but no call was made.

Martinez hit Packard on a short pass play to extend the Spartans lead to 20-12 with 7:29 left in the third.

The Badgers came storming back as good drive was capped off by Leopold’s second touchdown with 5:20 on the third quarter clock. Once again the two point attempt failed, closing the gap to 20-18.

The Prescott QB  Vaughan made the defensive highlight reel, by picking off a Martinez pass, setting up the Badgers with great field position at the Camelback 39. The home finally was able to take the lead with 11;11 left in the game, as Cian McKelvey ran for a 37 yard touchdown, giving Prescott its first lead of the night, 24-20.

Leopold, who finished with 14 tackles on defense, added his third TD on a four yard rush with 9:05 to play, and that was pretty much all she wrote.

Cervando Vega snared a nice pass interception with less than a minute to play, for one final highlight..

Leopold said, ”We wanted to win this one for coach. After being ejected we went into the locker room and the coaches got us focused again and we knew what we had to do.” In regards to the many skilled position players, Leopold added, “It is really good for us to have so many players that can step up and make plays.” On playing in front of a crowd again, “It’s great to see everyone come out and support us. It’s about having fun for them, and if we do what we are suppose to, then it is fun for us too.”

Cervando Vega, who finished with 10 tackles and a fumble recovery and pass interception said, “We just needed to wake up, well, coach getting kicked out game motivated us, and we played for him.” The Badger defense did a good job despite allowing 20 points. On their effectiveness in the defensive secondary, “We are working we each other and we communicate with each other. A lot of practice and hard work.”

Other defensive standouts were Cody Hanna with 12 tackles, and Cian McKelvey added 8.

Offensively Vaughan completed 7-13 for 131 yards and the one TD. The leading rusher was Leopold with 151 yards, and McKelvey had 79.

Both teams will play in Phoenix next Friday at 7pm. Camelback (0-2) will host Copper Canyon and Badgers (2-0) will travel  to face Washington.