Bears Make Quick Work of Badgers 3-0: Student sections were up for this rivalry match 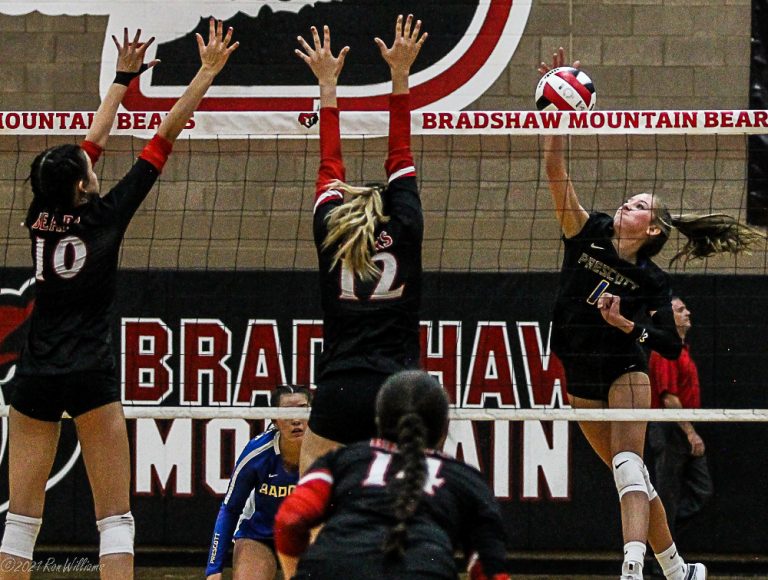 The first volleyball match of the season between the two local rivals, the Bradshaw Mountain Bears and the Prescott Badgers, went to the Bears 3-0, in a match that took about an hour to decide.

The crowd, along with the Bradshaw Mountain band made the venue deafening at times, as each student section seemed to live and die with each point. Bradshaw Mountain’s coach Karrie Platt said, “This is the first time we have had the band here. So much energy in here tonight. Most of our girls have never played with fans in the stands, and you could notice that there were some jitters to start, but they settled in nicely. It goes without saying that it is a rivalry match, the girls all know when it’s Prescott and Prescott knows when it’s Bradshaw. It’s exciting to play the rivals.”

The first game was a see-saw match up through the midway point when the Bears put a string of points together to break a tight game open, going up by as much as 6, at 23-17. The Badgers pieced together three in a row before falling 25-20.

Needing a win to even things up, the Badgers jumped on top early in game two, but Bradshaw Mountain came back capitalizing on Prescott miscues. Trailing 23-17, the Badgers rallied to close within three before failing by four.

Bradshaw Mountain had all the momentum going into game three and they jumped on top sensing a sweep. Up 4-0, and later 9-3, the Bears lead eventually grew to 16-5. Prescott just couldn’t find a way turn the tide, as the game came to an end.

Katie Janzen said, “We had a lot of energy, and we were really looking for some redemption after the ending of last season. It was a lot of fun.”

Platt added about her teams’ performance, “We hit a lot better and passed a lot better tonight. The girls were definitely up for it being a rivalry game. We are only getting better and we have a lot of room for growth I feel confident and excited.”

The Bears even their record at (1-1) overall, and are (1-0) in the Grand Canyon Region. The Badgers drop to (0-1) in the GCR, and (1-2) overall. Prescott will travel to face Coconino on Thursday at 6pm. Bradshaw Mountain will also be on the road, in Cottonwood,  versus Mingus, also Thursday at 6pm.