Why “Cancel Culture” Should Be Cancelled 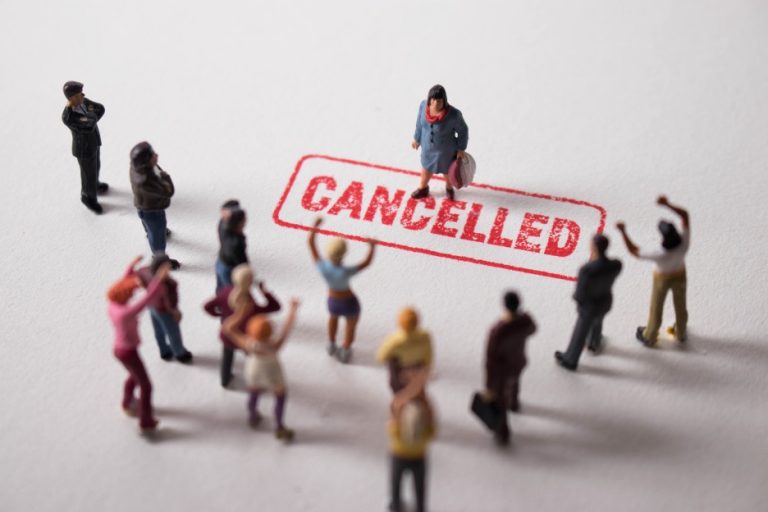 It seems like nearly every day some celebrity gets in trouble on social media for either doing something bad many years ago or doing something not politically correct today, and it’s tiresome.

In this article, I’ll provide some examples of cancel culture and discuss my thoughts on the effect it has on society.

Let’s say I’m in bed, bored, and I start browsing my Google News feed looking at science articles. Then, I’ll accidentally refresh the page and see an article about a retired basketball player who got in trouble for saying something rude. For one, why do I care? For another, how is that even newsworthy?

I understand the concept of wanting to hold celebrities accountable for their bad behavior, but the problem starts when cancel culture holds  celebrities to a higher moral standard than “regular people.”

For one, celebrities are not “special” and shouldn’t be put on a moral pedestal, so the idea that your favorite actor or athlete can’t ever do anything bad is just illogical. If one of your coworkers or classmates has said or done something that you don’t approve of, I’m sure plenty of celebrities have as well.

For another, it’s a waste of time. Why bother reading tabloid articles about celebrities who you will never meet when you could be doing something more productive with your day?

But that’s not the main problem – the true issues go much deeper than that.

A huge issue is that it’s ridiculous to try to ruin someone’s career just because they say something offensive or something that today’s politically correctness (PC) culture doesn’t agree with.

Let’s say that the star of a popular sitcom just posted on Twitter about how the transatlantic slave trade and the Holocaust were the two most wonderful events in human history. I can completely understand if the show’s executives fired them immediately and they were blacklisted, and I can understand if everyone on social media ganged up on them.

However, that’s very rarely the case.

For example, NBA player Nathan Gerry came under fire in 2020 for posting “racist tweets” that featured the n-word.

This obviously made me imagine that he probably went on a racist rant or something, but that’s not the case.

When I was a teenager, I said some stupid things as well that don’t represent who I am as a person, and that’s how “growing up” works, so I think he can catch a bit of a break for that reason.

Moreover, here’s an excerpt of one of the Tweets:

I’m not going to go into a rant about the first amendment, or freedom of expression, or how it might be okay if he were raised in the hood, or how words have no power by themselves, or anything else like that.

The simple truth is, he was a white kid who used a racial slur publicly on social media, which was bad – but he wasn’t using it in a racist context, so it’s “forgivable” and not worth starting a fire over, in my opinion at least.

The fact that Twitter users were up in arms about something that benign is just stupid.

Gerry’s case is a typical example of short-lived internet outrage that generates clicks for tabloid articles and then is forgotten soon after.

Beyond that, things get much worse. In fact, the perfect example involves Grammy Award-winning singer, Billie Eilish, who has been caught up in a series of scandals lately.

I’ll admit, I’m not exactly a fan of her music. In my opinion, the lyrics are mediocre, the heavy use of reverb and autotune are tiresome, and the only interesting thing about her songs are the music videos, which she didn’t create. As well, her fanbase is one of the most toxic groups of internet users I’ve ever seen, which I’ll go into in a moment.

So, here’s the deal, Eilish makes music that appeals to Gen-Z and is therefore highly marketable, making her extremely popular these days – and with extreme popularity comes extreme scrutiny.

Personally, I think her music is only popular because pretty much 99% of today’s pop music is garbage, which makes hers look good in comparison.

That said, she seems like a nice girl to me, and she hasn’t done anything to deserve all the hate. What were these bad things that she did to upset PC culture, you ask? The unspeakable – no, the unthinkable.

She released a music video featuring girls at a sleepover and was accused of “queer-baiting” because she “identifies as straight.” So… you’re telling me that straight girls can’t have sleepovers and dance and play twister? Absurd. What else? She filmed herself talking in a silly gibberish voice and everyone on Twitter accused her of making fun of Asians.

Buddy, I hate to break it to you, but if you think silly gibberish sounds Asian, you might be the racist.

There was one other thing, which is how she lip synced to a Tyler, The Creator song and mouthed the “c-word” (relating to Asians).

Bear in mind that on top of all of that, she was around 14 at the time.

I’m sure after reading all that, you’re thinking “So what?”

So, it turned out that those three things were enough for her fanbase to divide in half and for people on Twitter to turn on her like a pack of rabid wolves.

Regardless of your opinion of Eilish, that’s not fair of her fans to do to her.

Getting massive backlash and harassment from random nobodies on the internet and then having to write a phony apology to appease the masses is one thing, but what about when digging up the past almost costs a celebrity their job?

One such example is James Gunn, the director of the Guardians of The Galaxy films.

His case is actually quite ironic.

The majority of “cancel culture” in a political sense happens when a celebrity says something either supporting a right-wing figure or policy, such as saying “Vote for Trump!” or opposing a left-wing view, such as saying “I don’t support abortion.”

If you say those things publicly and have a large number of followers/fans, backlash is inevitable.

However, the irony with Gunn’s case is that it was actually right-wing people who “cancelled” him.

Gunn is an outspoken liberal who also fancies himself a comedian. This was one of his jokes:

“Transcription of Trump with anyone he’s appointed to anything. TRUMP: Do you know anything about the position?

CANDIDATE: Yes, sir, I am completely, always on your d–k, forever. TRUMP: You’re in.”

Not surprisingly, this remark, and many others like it, angered supporters of Donald Trump, who then looked through years of Gunn’s Twitter posts to find something controversial.

Lo and behold, they did. Just like with Gunn’s hilarious Trump jokes, he posted a whole slew of other jokes ranging from rape jokes and pedophilia jokes to 9/11 and Holocaust jokes.

His jokes may not have been funny, but who even cares? He’s a filmmaker, not a politician, and he makes decent movies – and before his time with Disney, he had an edgy, very non-family friendly career with Troma Entertainment.

Also, just like with Gerry, his tweets were around a decade ago.

As well, tons were taken out of context, and there’s more behind them that’s too long to get into. This was his public apology and this is a very informative article that explains how the insults against his character are misplaced.

What ended up happening was that Disney saw his Tweets and fired him from the series on the spot, making an announcement that he doesn’t represent their values.

So, let me get this straight, the man made some stupid posts a decade ago, so you should cost him his current job? That’s outrageous.

The fans managed to get him rehired by Disney, which was incredible, but you can’t expect that to happen on average, especially when the person being “cancelled” isn’t a leftist.

The worst part about “cancel culture” isn’t that these poor celebrities and their millions of dollars are having a tough time. No, not at all. The worst part is that nearly everything anyone has ever said (especially on the internet) could be used against them in the future, and that something that was considered funny and acceptable in the past could end up becoming completely unforgivable today, like when Mickey Rooney performed in yellowface in Breakfast at Tiffany’s.

However, First Amendment be damned, it’s one thing to want to suppress racism and other bigotry, especially in today’s climate, but half of the things people are getting canceled for aren’t racist or bigoted, and hardly any are even that bad.

The harm that this political correctness culture has caused is now people (especially young people) have formed this hive mind collective where anyone who says anything against the narrative will become an enemy and will end up losing either their job or their reputation.

Free thought and freedom of expression are now legitimately being threatened, as now even different opinions are labeled as “hate speech.” These threats to our freedom come straight out of Minority Report and 1984, and we need to tread carefully.

Most people are not famous enough for this to affect them on a similar scale as that of Billie Eilish, but no one is immune. For people who aren’t celebrities, their non-PC remarks usually get screenshotted and sent to their boss, or coworkers, or family.

My question is this: why?

Why do these people care so much? How unfulfilled with your life are you to spend your time trying to “cancel” people? And I’m willing to bet that half of those internet crusaders have done questionable things, themselves, so why have they decided to turned society into a Bodysnatchers remake? That’s hypocritical and is a common way of shifting blame and liability. You’re a thief? Call out another thief to evade suspicion.

In a divided society like the one today, “cancelling” people just tears us all apart even more.

Everyone should have the right to an opinion, and when monsters such as “opinion police” team up with pseudo-moral crusaders to harm people’s livelihood just because they’ve done or said some harmless questionable things, that’s when we reach the slippery slope of accountability and freedom.

Should people be held accountable for their bad behavior? Of course, but how do you quantify “bad behavior?”

What about eating meat? Vegans might be offended, but it’s not globally seen as evil.

Fast forward twenty years from now, and it could be a capital offense, and eating meat in 2021 could come back to haunt you if people dig into your past because they don’t like you.

Where do we draw the line?