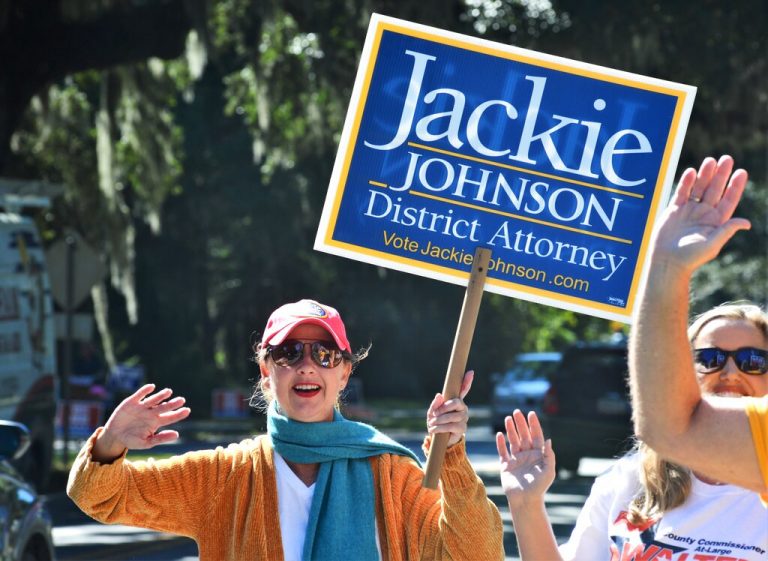 A former Georgia prosecutor was indicted Thursday on misconduct charges alleging she used her position to shield the men who chased and killed Ahmaud Arbery from being charged with crimes immediately after the shootings.

The indictment resulted from an investigation Georgia Attorney General Chris Carr requested last year into local prosecutors’ handling of Arbery’s slaying after a cellphone video of the shooting and a delay in charges sparked a national outcry.

“While an indictment was returned today, our file is not closed, and we will continue to investigate in order to pursue justice,” Carr, a Republican, said in a statement.

Arbery was killed Feb. 23, 2020, after a white father and son, Greg and Travis McMichael, armed themselves and pursued the 25-year-Black man in a pickup truck after spotting him running in their neighborhood outside the coastal city of Brunswick, about 70 miles (112 kilometers) south of Savannah.

A neighbor, William “Roddie” Bryan joined the chase and took cellphone video of Travis McMichael shooting Arbery at close range with a shotgun. The McMichales said they believed Arbery was a burglar and that he was shot after attacking Travis McMichael.

Police did not charge any of them immediately following the shooting, and the McMichaels and Bryan remained free for more than two months until the cellphone video of the shooting was leaked online and Gov. Brian Kemp asked the Georgia Bureau of Investigation to take over the case.

Both McMichaels and Bryan were charged with murder and other crimes in May 2020 and face trial this fall. Prosecutors say Arbery was merely jogging in their neighborhood and was unarmed when Travis McMichael shot him. They say there is no evidence Arbery had committed a crime.

Greg McMichael had worked as an investigator in Johnson’s office, having retired in 2019. Evidence introduced in pretrial hearings in the murder case shows he called Johnson’s cellphone and left her a voice message soon after the shooting occurred.

“Jackie, this is Greg,” he said, according to a recording of the call included in the public case file. “Could you call me as soon as you possibly can? My son and I have been involved in a shooting and I need some advice right away.”

A record of Greg McMichael’s cellphone calls that day does not show that Johnson called him back.

The indictment says Johnson showed “favor and affection” toward Greg McMichael in the investigation and interfered with police officers at the scene by “directing that Travis McMichael should not be placed under arrest.”

Johnson did not immediately return a phone message seeking comment Thursday afternoon. She has previously insisted she did nothing wrong, saying she immediately recused herself from the case because Greg McMichael was a former employee.

“I’m confident that when the truth finally comes out on that, people will understand our office did what it had to under the circumstances,” Johnson told The Associated Press in November after she lost reelection.

Lee Merritt, an attorney for Arbery’s mother, said in a statement Thursday that prosecutors “must be held accountable when they interfere with investigations in order to protect friends and law enforcement.”

In his call for an investigation into prosecutorial misconduct, Carr asked the GBI not only to investigate Johnson’s actions related to the killing but also those of Waycross Judicial Circuit District Attorney George Barnhill. No charges have been announced against Barnhill.

Carr ended up appointing Barnhill to take over on Feb. 27, four days after the shooting. In his letter ordering an investigation last May, Carr said he was never told that Barnhill had already advised police “that he did not see grounds for the arrest of any of the individuals involved in Mr. Arbery’s death.”

Barnhill later recused himself as well, after Arbery’s family learned his son worked for Johnson as an assistant prosecutor. But before he stepped aside, Barnhill wrote a letter to a Glynn County police captain saying the McMichaels “were following, in ‘hot pursuit,’ a burglary suspect, with solid first hand probable cause, in their neighborhood, and asking/ telling him to stop.”

“It appears their intent was to stop and hold this criminal suspect until law enforcement arrived. Under Georgia Law this is perfectly legal,” Barnhill advised in the letter, referencing Georgia’s Civil War-era citizen arrest statute.

That law was repealed in May 2021, with overwhelming support from Republicans and Democrats, as a reaction to Arbery’s death.

Johnson told the AP in May 2020 that Glynn County police contacted two of her assistant prosecutors on the day of the shooting. She said it was the officers who “represented it as burglary case with a self-defense issue.”

“Our office could not advise or assist them because of our obvious conflict,” Johnson said.

Johnson blamed the controversy over Arbery’s death for her election defeat last year after a decade as top prosecutor for the five-county circuit in southeast Georgia. She was defeated by independent candidate Keith Higgins, who had to collect thousands of signatures to get on the ballot.