Some schools sticking with mask mandates, despite Ducey funding threat 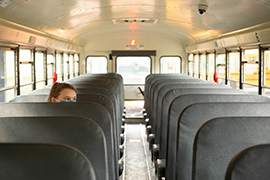 Friday was the deadline for schools to drop mask mandates if they wanted to be eligible for a share of millions in COVID-19 state aid, but at least several districts in the state were refusing to comply with Gov. Doug Ducey’s demand.

While many school districts did not have mask mandates to begin with, others were proceeding with plans to require masks for students and staff.

One district requiring masks said it is still eligible to apply for the grant, citing a U.S. Education Department letter that said schools could use the funds to implement “indoor masking policies” aligned with Centers for Disease Control and Prevention guidance on COVID-19 protocols. Another pressed ahead with its mask policy while calling on the governor and legislature to reverse the law.

“Allow public school districts in Arizona the local control and flexibility to implement mask requirements as each locally elected school board deems necessary,” said a resolution adopted by the Tempe Union High School District on Aug. 9.

Ducey’s office did not respond to request for comment on the program, except to confirm that Friday was the deadline for school districts to meet the state law. But critics had plenty to say about his grant program.

“What the governor has proposed is immoral and illegal,” said Rep. Greg Stanton, D-Phoenix, who urged Treasury Secretary Janet Yellen to tell Ducey he risked losing the federal funds involved if he proceeds with his “reckless proposal.”

Stanton said the funding, which was part of the American Rescue Plan, cannot be used for anything other than taking steps to stop the spread of the virus, and should be going to school districts that follow CDC guidelines.

“He’s playing politics and is being once-too-cute with this,” Stanton said Friday. “He is simply trying to appeal to extreme right-wing science deniers.”

Stanton’s letter to Yellen was sent on Aug. 17, the same day Ducey unveiled the Education Plus-Up Grant program for schools “following all state laws and remaining open for in-person instruction as of August 27 and throughout the remainder of the year.” The program specifically cites the pending state law that prohibits local governments, school boards and charter schools from requiring masks or vaccinations for staff and students.

The money would only be available to school districts that have received less than $1,800 per pupil in federal funding, about 150 districts statewide that could get enough to boost them to the $1,800 level. Awards to districts could range from as little as $18,426 under the plan to as much as $12.4 million.

The superintendent of the Tucson Unified School District – which would not be eligible for the grant under the financial guidelines – criticized the plan, saying it could hurt schools that need help the most.

“This is another unfortunate example of the kind of inequity that has plagued our educational system and that has the potential to further exacerbate the achievement gap in this state,” said Gabriel Trujillo, the Tucson superintendent, in a statement.

The Arizona Department of Education said it does not keep a list of schools with mask mandates, and calls to many of the school districts that would qualify for the program were not immediately returned. Checks of dozens of school websites showed that many are simply encouraging masking but some, like the Tempe high school district, are forging ahead.

The Catalina Foothills Unified School District is one system that could be eligible for the grant program and has a mask requirement. A district official said in an email Friday that it still planned to apply for the grant, citing the letter from U.S. Education Secretary Miguel Cardona.

That letter – to Ducey and Arizona Schools Superintendent Kathy Hoffman – was a response to Rep. Raul Grijalva, D-Tucson, who wrote Cardona questioning the legality of Ducey’s proposed use of the federal funds.

Grijalva said he agrees with the school districts that are continuing mitigation efforts such as mask-wearing, and he believes those decisions should be made by local officials who are “right next to the voters and right next to the children.”

“It is such a political act,” Grijalva said of the grant program guidelines. “It has nothing to do with public health, public safety and especially the safety of kids and their families,”

Grijalva accused Ducey of “blackmailing school districts with money” to curry political favor, but said he is “jeopardizing the wellbeing of children” instead.

Grijalva said he does not know what comes next but that “we’re in a political debate, when it should be about public health.”