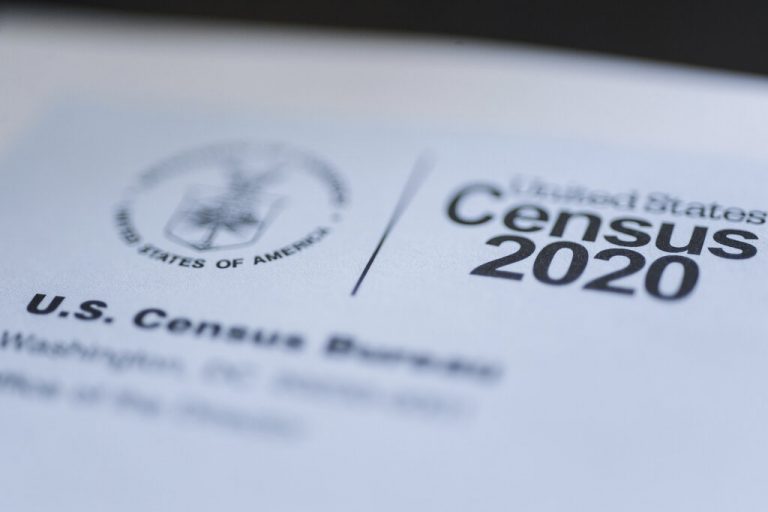 “It’s not happening and it’s good that it is.” That sums up progressives’ response to The Great Replacement — the dispossession of whites in their own countries. The most recent census showed that the number of whites declined for the first time in American history.

Michael Moore called this the “best day ever in U.S. history.”

Twitter
Michael Moore @MMFlint
From today’s news (8/12/2021): “The Census data collected from the 2020 Census was released today — and it revealed that the number of White people in the U.S. has fallen for first time since the first Census was taken in 1790.” In other words, best day ever in U.S. history.

Love to see it. The less white people the better.

I Believe!
I Believe! That will be the saving grace for America and Democracy. Fewer whites, changes in the voting disgraces they have made. Republicans and their Redistricting is just pure hatred and fear of other races. They are cowards.!!
Michael Corn
@NotArtDecider
Replying to @CCirolia and @Sifill_LDF
They eventually will. America is on a one way track to become a true multi-ethnic nation by the 2040s. This is whiteness’ last stand. All we need to do is protect and strengthen democracy (For the People Act and John Lewis Voting Rights Act plus enforcing them vigorously).
***************************

Late-night talk show host Jimmy Fallon mentioned the Census. “The results of the 2020 census just came out — for the first time in American history, the number of white people went down.”

A new study from the Pew Research Center found that most people think white decline is neither good nor bad. However, there are exceptions. About a third of self-identified liberals think it is “very good” or “somewhat good.” A slightly lower proportion of the total population aged 18–29 shares this view. One-in-four Asians think white decline is a good thing for society. That’s a higher proportion than blacks, Hispanics, and whites.

The forthright celebration of another group’s declining numbers would be considered “hate” on social media platforms — except in our case. Some fellow citizens really do hate us. No conversation is possible with such people, especially when they think whiteness is an evil power that is ineradicable.

Others may think this is progress. White liberals have a negative bias against their own race. Some are truly broken, but most are probably not “self-hating;” they just have a strong distaste for white conservatives. Some data show that most Americans would be more uncomfortable with their children marrying someone of a different party than of a different race.

However, the image partisans have about their opponents is closely correlated with race. According to research from Nicholas Valentino and Kirill Zhirkov (mysteriously vanished from Stanford’s website, but archived) partisans have developed “racialized” images, or negative stereotypes, of the other side.

Judging from what liberals say about Republican voters, and not just politicians, they seem to think conservatives are dangerous and primitive: 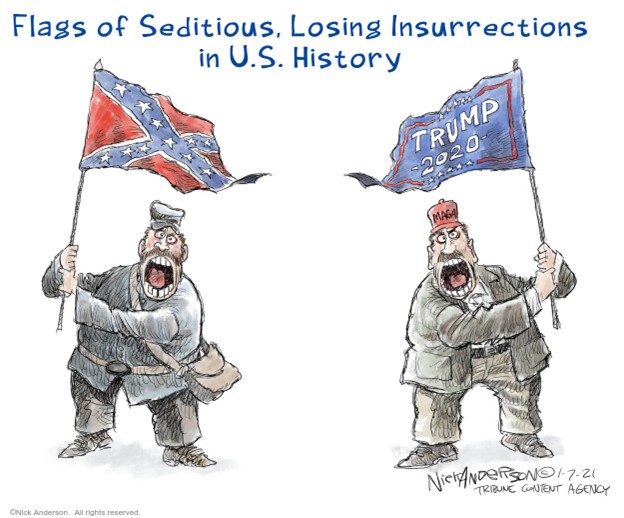 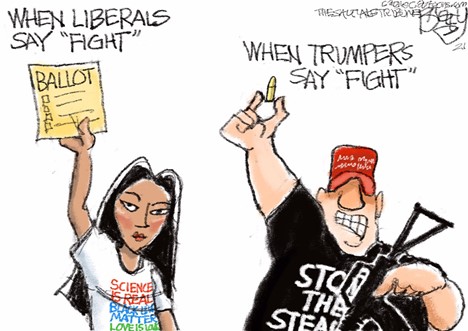 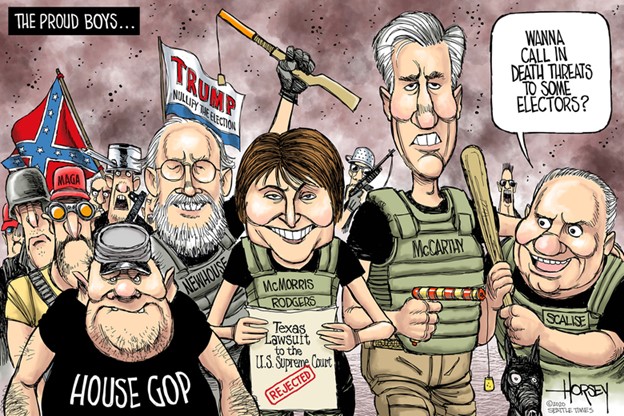 Could blacks be portrayed this way? That cartoon with a leering Steve Scalise is especially interesting; a Bernie Sanders-supporting Democrat shot and badly wounded him in 2017. It was probably an attempted massacre of Republicans, but the FBI said it was “suicide by cop” — to Rep. Scalise’s fury.

White liberals seem to believe white conservatives are standing in the way of a post-racial future in which all groups will be equal. Perhaps they truly believe this will be better for whites, too.

In a cheerful article called “The U.S. Census Paints a Colorful Picture of America,” DC Report says, “It is the kind of shift that should give new impetus to efforts to rebalance long-standing racial inequities in housing, employment, and social interactions.” A recent poll found Americans think race relations are getting worse. It seems that the more America does to “rebalance” the scales, the less people like it. Historical examples from South Africa and Rhodesia suggest this “rebalance” won’t work out well. A future non-white America will not be as bad as southern Africa because it will not have a black majority. Its decline will be more gradual and have more ruling-class racial division. But the white-baiting and white-blaming will be the same.

In a rational world, people would stop trying to pursue fantasy, but it’s hard to talk someone out of a beautiful dream. “Multiracial democracy” is apparently so desirable that even violence might be justified to achieve it.

To see what “multiracial democracy” means, you don’t need to look at South Africa. Just see what’s left of once great American cities. Many whites know what’s coming. More than one-in-four white Americans think the demographic shift is “somewhat bad” or “very bad.” However, some journalists regard these misgivings as threatening, even dangerous.

So, once again, we get an opinion piece alleging “The Great Replacement” is a “racist conspiracy theory.” This time it’s Salon author Paul Rosenberg arguing that when Tucker Carlson talks about demographic change, he is promoting a “crackpot notion that has fueled mass shooters.”

If it’s a “crackpot notion,” Mr. Rosenberg might want to tell his own side to stop loudly celebrating it. He might want to warn Michael Moore not to say that fewer whites means the “greatest day” in American history.

Though Mr. Rosenberg’s article is familiar territory for white advocates, there are two points worth addressing. First, he lists shootings he wants to link to the “conspiracy theory.” Some occurred in other countries; none happened within the last year.

However, his implied claim is striking. He’s suggesting that discussing ideas inspires mass shootings. Nationalists are marginalized and censored, so if people do hear about The Great Replacement, it is probably from leftists such as Michael Moore celebrating it.

Furthermore, if we are going to play this game, it is progressives who enjoy unrestricted access to major platforms, schools, and universities. They shame whites and teach non-whites that “racism” causes their problems. No other factor may be used to explain black and Hispanic failure. Not surprisingly, this incites non-whites. If mass shootings are caused by marginal activists, certainly the current crime wave, which includes deliberate acts of violence against whites, is the moral responsibility of journalists, educators, and corporate executives who have been heaping scorn on white people.

Who commits violent crime in this country? Even the ADL had to skew its own data to try to blame white advocates for violence.

[T]he Great Replacement that has actually taken place is the replacement of the ideas, ideals and mores of conservatism. As debased and depraved as those had already become, they have now been supplanted by much darker principles, which have deadly real-world consequences and pose an existential threat to what remains of American democracy.

Who has given up on “American democracy?” California voted against demographic transformation with Proposition 187 in 1994, but a judge threw it out. Was that democracy? In 2016, Americans elected a man who campaigned on a platform to end birthright citizenship, expel illegals, and build a wall to stop immigration. These things did not happen, partially because judges thwarted the president. Is that the way the system is supposed to work?

Today, American dissidents can lose access to payment processors, financial services, and be deplatformed. Journalists campaign against “misinformation” and the federal government works with tech companies to censor ideas it doesn’t like. Free discussion, freedom of association, self-determination, and the sovereignty of the people are all but absent. America is freer than the United Kingdom, but we aren’t a “free country” anymore. What, precisely, does Mr. Rosenberg mean by “American democracy?”

Mr. Rosenberg, Michael Moore, and other leftists quoted above are putting white replacement above other causes progressives used to care about. You can’t protect the environment, increase wages, or combat corporate power while cheering on mass immigration. Samuel Gompers, Jack London, Barbara Jordan, and even Cesar Chavez (whose bust is in the Oval Office) were “far right” by today’s standards.

Progressives may reduce us to a minority in what used to be our country, but it will be a hollow victory. They will be left with just another Third World wreck, full of angry non-whites who can’t understand why they are still poor. There will be no white America they can flee to or blame.

For us, the picture is different. We are a global minority and the West is the only home we have. The Census figures are grim enough; and now people openly applaud our dispossession and potential extinction.

However, we should take hope. Enough whites already agree with us, enough for us to accomplish whatever we want. Countless others are waiting for leaders. There are enough white advocates so that social isolation isn’t the problem it used to be. Those who rule this country must increasingly rely on the selective law enforcement, corporate power, crude propaganda, and underhanded police tactics.

Progressives have given up on free speech and on the American nation as it was and is. They have given up on the traditional symbols of America, her flag, her anthem, her history, and her heroes. Instead, they want an imaginary “multiracial democracy” of the sort we see in Africa, Brazil, and in many American cities. They leave behind desolation and call it diversity.

We have a twofold struggle. First, we must respectably, respectfully, and rationally win over those whites who don’t think demographic change matters. The racial revolution of 2020 continues; most whites are sick of hearing about race, but progressives won’t let up. All whites will be forced to take sides, whether they want to or not. When forced, most will take their own side.

Second, we need to organize the base that already agrees with us. Millions of white Americans are already on our side. They lack practical goals, political representation, and ways to fight back. However, we can see the nucleus of what could be a successful resistance movement in the parents who are fighting Critical Race Theory, young activists confronting political correctness on campus, and most importantly, the white advocates who continue to enter this movement knowing full well the magnitude of the opposition. This gives me faith in final victory.

Don’t let the census discourage you. We have the people we need, but we must act in the most effective ways we can. Support our activists, never apologize, speak the truth boldly. Build community. Do what is necessary to be with likeminded people. The Great Replacement is real, but we are going to stop it, reverse it, and raise our country and civilization to its greatest heights.