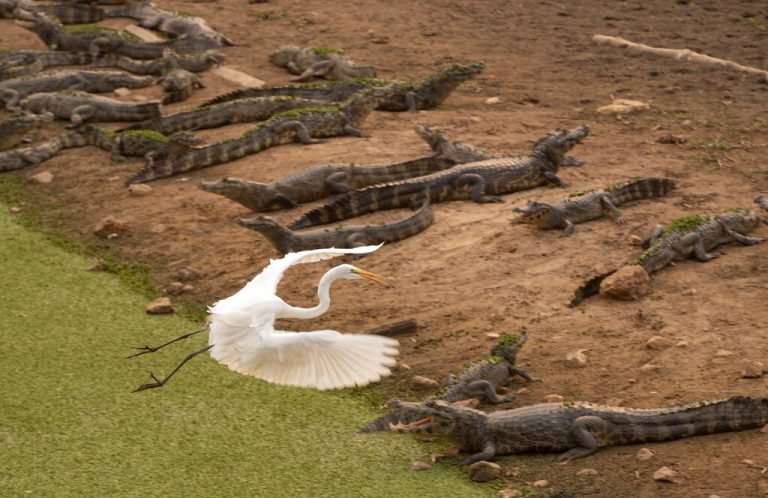 The Brazilian scientists were skeptical. They ran different models to check calculations, but all returned the same startling result.

The country with the most freshwater resources on the planet steadily lost 15% of its surface water since 1991. Gradual retreat in the Brazilian share of the Pantanal, the world’s largest tropical wetland, left water covering just one-quarter the area it did 30 years ago.

And the data only went through 2020 — before this year’s drought that is Brazil’s worst in nine decades.

“When we got the first results, we wondered if there was a problem in the equations,” said Cassio Bernardino, a project manager for environmental group WWF-Brazil, which took part in the survey along with Brazilian universities and local partners like the Amazon Environmental Research Institute, plus international collaborators including Google and The Nature Conservancy. They used artificial intelligence to parse some 150,000 satellite images measuring the surface of lakes, rivers, marshes and all surface water across Brazil.

The figures checked out, and the MapBiomas data published this week has heightened an existing sense of alarm. The ongoing drought has already boosted energy costs and food prices, withered crops, rendered vast swaths of forest more susceptible to wildfire and prompted specialists to warn of possible electricity shortages. President Jair Bolsonaro on Thursday said hydroelectric dam reservoirs are “at the limit of the limit.”

“The prospects are not good; we’re losing natural capital, we’re losing water that feeds industries, energy generation and agribusiness,” Bernardino said. Brazil’s “society as a whole is losing this very precious resource, and losing it at a frighteningly fast rate.”

The study accompanying MapBiomas’s data hasn’t been published yet. Two outside experts consulted by The Associated Press who reviewed the survey’s methodology said the approach appears robust, and its scale offers important insight into Brazilian water resources. They noted, however, use of artificial intelligence to analyze satellite images without on-the-ground verification could increase the margin of error.

Evaporation is a part of the natural cycle that can diminish water resources, particularly in areas with shallower supplies like the Pantanal wetlands, which sprawl across up to 80,000 square miles in three countries. It is a persistent problem in places like Lake Mead and Lake Powell in the Colorado River basin.

“We’re altering the magnitude of those natural processes,” said Sulliván, a wetlands expert who has studied water systems in the U.S., South America, Eastern Europe, and the Caribbean. “This is not just happening in Brazil, it’s happening all over the world.”

Sulliván said the MapBiomas data was “eye-popping,” though unsurprising; nearly 90% of South America’s wetland area is estimated to have vanished since 1900, and nearly 40% in North America, he said. Wetlands are essential to many species of wildlife and key to retaining water to be gradually released into rivers, which prevents flooding.

In Brazil’s Amazon rainforest, water that evaporates then travels on air currents to provide rainfall far afield. But some climate experts argue that the Amazon is headed for a “tipping point” in 10 to 15 years: if too much forest is destroyed, the Amazon would begin an irreversible process of degradation into tropical savannah.

There are more immediate sources of alarm, like possible power rationing this year. Hydroelectric reservoirs have been drained by a decade of lower-than-usual rainfall. Reservoirs in the Parana River basin, which powers the metropolis Sao Paulo and several states, have never before been so depleted, the grid operator said this month.

The Parana River runs from Brazil into Argentina and along its course are the iconic Iguazu Falls at the border of the nations; the majestic cascades were unrecognizable for a few days in June, having dwindled to a trickle. The Parana waterway and its aquifers supply fresh water to some 40 million people, and a livelihood for fishing communities and farmers.

Brazil’s energy minister Bento Albuquerque on Aug. 25 called a press conference to deny the possibility of rationing, while at the same time calling on companies and people to reduce power consumption. Some analysts have speculated dismissiveness is politically motivated ahead of an election year.

“At the current rate, blackouts are likely to happen this year, especially during peak hours,” said Nivalde de Castro, coordinator of the electricity sector studies group at the Federal University of Rio de Janeiro.

Brazil’s declining water resources also risk exacerbating fires that people often set during the Southern Hemisphere’s winter to clear pasture, which then rage out of control.

Last year, more than one-quarter of Brazil’s Pantanal went up in flames. It was by far the worst annual devastation since authorities started keeping records in 2003.

The Pantanal has strong capacity to regenerate if given the opportunity to do so without repeated burning events. A surge of fires in the past week stirred concern among locals.

“Once again, the specter of fires is back,” said Angelo Rabelo, president of a local environmental group that oversees a protected area of about 300,000 hectares. Last year, 90% of his land was damaged by blazes.

Researchers at the State University of Mato Grosso found parts of the Pantanal in 2019 had 13% more days without any precipitation compared to the 1960s. Jibing with the MapBiomas study, their findings also showed the marshes were losing surface water.

“The scenario is even worse this year: drier, and with less water,” Rabelo said from Corumba, a municipality in Mato Grosso do Sul state.

For Rabelo and others, last year’s fires were a wake-up call. He formed a full-time private fire brigade of seven people — the Pantanal’s first. They are better trained and have so far been able to respond faster, before fires spiral out of control.

But fresh challenges lie ahead. In areas without roads, navigation on smaller rivers can become problematic due to low water levels, Rabelo said. That means firefighters could soon have trouble reaching some blazes and, even if they can, less water available to extinguish them.

“The integration of water loss and wildfires: that’s a big issue that we need to start thinking more about,” said Sulliván.