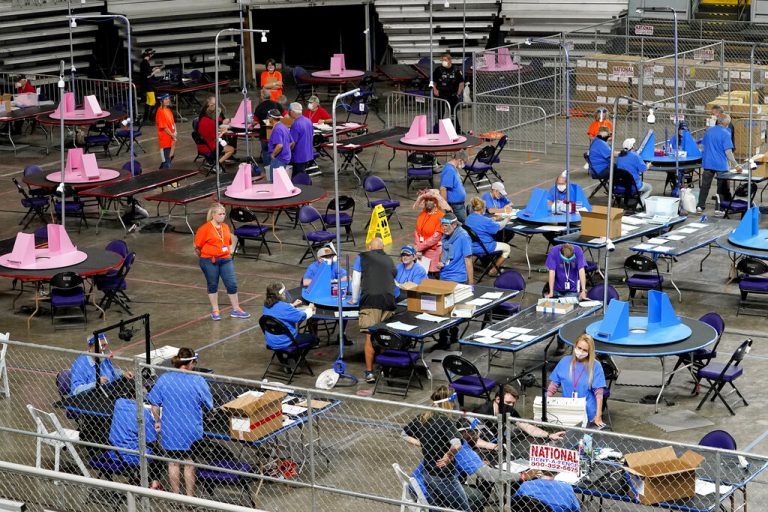 Arizona Senate Republicans are expected to begin their review Wednesday of a partial Maricopa County election audit, but critics are not waiting until then to target the report as little more than “invalid and unreliable” partisan propaganda.

A full report by Cyber Ninjas was delayed after several company officials were diagnosed with COVID-19, among other problems, said Senate Majority Leader Karen Fann, who has been a driving force behind the election probe. But Fann said in a tweet Monday that the “Senate legal team will meet Wednesday to start reviewing the draft report.”

That did not stop the Arizona secretary of state, a Democrat, and the Maricopa County recorder, a Republican, from separately issuing blistering advance critiques of the report last week. And it did not stop a congressional committee from demanding documents on the probe by Friday from Cyber Ninjas.

“It is clear that any ‘outcomes’ or ‘conclusions’ that are reported from the Senate’s review, the Cyber Ninjas or any of their subcontractors or partners, are unreliable,” Arizona Secretary of State Katie Hobbs said in a 46-page report that exhaustively detailed problems with the ballot review.

Hobbs’ report on the “partisan review” was released Thursday, the same day that Maricopa County Recorder Stephen Richer issued a 38-page “Dear Arizona Republicans” letter in which he called the Cyber Ninjas audit “an abomination that has so far eroded election confidence and defamed good people.”

“I’m embarrassed listening to my party concoct the most outlandish theories (Chinese ballots!) to avoid accepting the reality: We lost the top two races in Arizona,” Richer said in his letter, that detailed death threats he has received for speaking out against claims that the 2020 election was stolen.

He went on to implore fellow Republicans to accept the 2020 election results, and move on to find ways to create more confidence in future elections.

Fann did not respond to requests this week for comment, but she has claimed since the outset of her effort that she is not out to overturn the election but to restore confidence in the process.

The review comes in the wake of the victories in historically red Arizona of President Joe Biden and Sen. Mark Kelly, both Democrats. Despite the vote being certified by state officials and passing a series of post-election audits, the state Senate voted on party lines in January to begin its own audit – only of the vote in Maricopa County and only of the presidential and Senate races.

The Senate allocated $150,000 for the audit by Cyber Ninjas and other firms that have since raised more than $5.7 million in private donations, many of which came from groups that back election fraud claims endorsed by former President Donald Trump.

The audit has been plagued by complaints of lax security, a lack of transparency, weak procedures and bias on the part of the auditors, who critics said lacked any experience with election audits.

Many of those concerns were cited by a congressional committee which wrote Cyber Ninjas CEO Doug Logan in July, demanding documents relating to the company’s procedures, its ownership, its funding and any communications with Trump or officials of his campaign or administration, among other records.

Democratic leaders of the House Oversight and Reform Committee extended their original deadline of July 28 to Aug. 14 to accommodate Cyber Ninjas. But when the company “failed to produce key documents,” the committee said this week it would give Cyber Ninjas until Aug. 27 to respond or it would “consider other steps to obtain compliance.”

Calls seeking comment from Cyber Ninjas and their attorney were not immediately returned this week.

But one critic repeated assertions that the company is only out to create confusion, not clarity, about the 2020 election.

“The audit is not about actual results. It’s all propaganda,” said Rep. Reginald Bolding, D-Phoenix, who was in Washington for a voter-rights rally Tuesday. He said opponents knew in advance that “the report would be delayed, we knew that the report would be inaccurate.”

“The 2020 election was probably the most scrutinized and audited election in Arizona history,” said Bolding, the House minority leader. “Cyber Ninjas and the charade that the Senate has allowed, we don’t expect anything to be legitimate from that.”

Bolding and other critics believe that the Arizona audit’s real aim is to “show some kind of fraud as a way to leverage additional states and additional elected officials to essentially maneuver around the law to put the American people in this sort of back-and-forth when it comes to democracy.”

Fann did not indicate when the final report might be delivered. But once it is, she said in her statement, it will be reviewed by the Senate team for “accuracy, clarity and proof of documentation of findings” before being turned over to the Senate Judiciary Committee and released to the public.

One Maricopa County official, pointing to the House Oversight Committee request, said he does not expect the final report to include any surprises. And that it’s time to move on.

“In their letter, the chairmen made it clear we don’t expect it to tell us anything we don’t already know,” said Fields Moseley, the county’s communications director.

“The elections department is now more focused on the election in November, and the even bigger midterm election in 2022,” Moseley said.