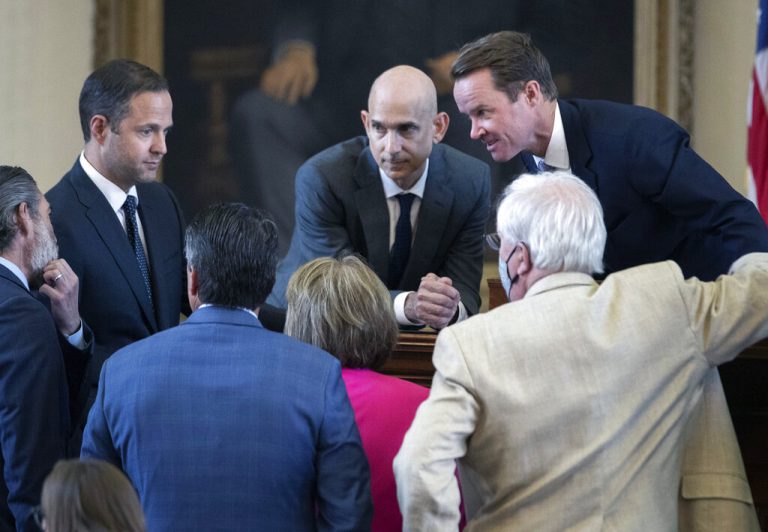 Photo: Speaker Dade Phelan, R-Beaumont, talks to Republican representatives after a quorum was restored in the House at the Capitol in Austin, Texas, on Thursday Aug. 19, 2021.

The sudden end of Texas Democrats’ 38-day walkout has put Republicans back on a fast track to pass a sweeping voting bill and is causing rifts among some Democrats who said Friday they felt “betrayed” by colleagues who returned to the state Capitol.

Texas is the last big GOP-controlled state that has not passed more restrictive voting laws driven by former President Donald Trump’s false claims that the 2020 election was stolen. But it is now likely only a matter of weeks after enough Democratic lawmakers ended their holdout Thursday to restore a quorum — by the slimmest of margins — in the state House of Representatives.

It broke a stalemate that brought the Texas Capitol to a standstill, and already Republicans are working fast to advance a sweeping bill to the House floor as early as Monday. The collapse of Democrats’ holdout frustrated a faction that appeared ready to torpedo the bill for a third time in Texas, even though a commanding GOP majority in the Texas statehouse made it unlikely that Democrats could permanently stop the bill from passing.

Nearly three dozen Democrats — which amounts to more than half the group that fled to Washington, D.C., in July — signed onto a statement that did not say whether they would now return but took aim at the few who already did.

“We are disappointed that a few Democrats chose to return to the floor. We feel betrayed and heartbroken, but our resolve is strong and this fight is not over,” the statement read.

Not all Democrats took part in the walkout, but the return of three Houston lawmakers Thursday is what finally pushed the House back to a quorum, which is normally 100 representatives. In a statement Thursday, the three lawmakers — Armando Walle, Ana Hernandez and Garnet Coleman — defended their return by saying they had pushed Congress on voting rights legislation while pointing to the growing urgency of surging COVID-19 caseloads in Texas.

For months, Texas Republicans have tried to pass measures that would prohibit 24-hour polling sites, ban drive-through voting and give partisan poll watchers more access. Those elements remain in a bill that was already passed by the Senate, and while the House may make changes, Republicans have shown no indication that they will remove some of the most hotly contested provisions.

The bill must reach Republican Gov. Greg Abbott’s desk by Sept. 5. If it doesn’t, Republicans will have to start over and try again for a fourth time.

“I think that bill will be back and forth between us and the Senate a little bit,” said state Rep. Jim Murphy, chairman of the Republican House Caucus.