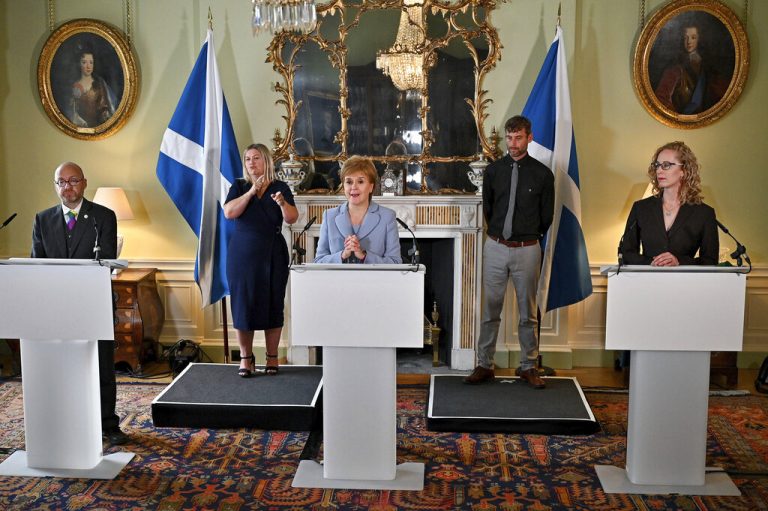 The Scottish National Party and the Scottish Greens agreed Friday on a power-sharing deal that falls short of a coalition government but could pave the way to another referendum on Scotland’s independence from the U.K. in the coming couple of years.

The two parties, which have been locked in negotiations since May after the SNP fell one seat short of an overall majority in the Scottish elections, will cement the pro-independence majority in the devolved Edinburgh-based parliament over the coming five years.

The SNP has been in power since 2007 and its leader Nicola Sturgeon has been Scotland’s first minister since late 2014 following the lost independence vote earlier that year.

“The publication of this agreement today undoubtedly marks a historic moment,” she said. “Working together to build a greener, fairer, independent Scotland is ground-breaking.”

Though the Scottish parliament has an array of powers, such as in health, education and energy matters, many economic and security matters remain within the orbit of the British government in London.

Under the terms of the agreement, two Green lawmakers will be nominated to become ministers — the first time the party has had such power anywhere in the United Kingdom. In return, Green lawmakers will support Sturgeon’s government in confidence votes, as well as in annual budgets.

Scottish Greens co-leader Patrick Harvie said the recovery from the coronavirus pandemic requires a change in the way of doing politics.

“We must build a fairer, compassionate country and we must do everything in our power to tackle the climate and nature emergencies and deliver a just transition for all of Scotland,” he said.

The agreement will likely set the stage for a confrontation with the British government over Scottish independence. Sturgeon reiterated her view that she wants to hold another referendum on the issue in the first half of this parliament — in essence before the end of 2024 — provided the pandemic is in the past.

British Prime Minister Boris Johnson, the leader of the Conservative Party, would have the ultimate authority whether or not to permit another referendum on Scotland gaining independence. Johnson appears intent on resisting another vote, setting up the possibility of renewed tensions between his government and Sturgeon’s devolved administration.

He has consistently argued that the issue was settled in a September 2014 referendum, when 55% of Scottish voters favored remaining part of the U.K. Proponents of another vote say the situation has changed fundamentally because of Brexit, with Scotland taken out of the European Union against its will. In the 2016 Brexit referendum, 52% of the U.K. voted to leave the EU while 62% of Scots voted to remain.

Sturgeon said it would be wrong for Johnson to stand in the way of a referendum and that the timing is a matter for the Scottish Parliament.

There’s been growing talk that the whole issue may end up going to court, but Sturgeon has said any attempt by the British government to thwart the democratic will of Scotland would only fuel the desire for independence.