The Fall of the Financial Dominoes 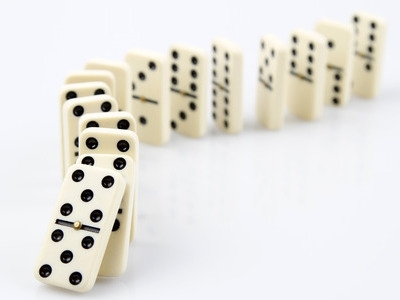 As measured by the Consumer Price Index, annualized inflation was between 8 and 11 percent over the past four months. The last time the economy experienced four consecutive months of inflation this high was at the tail end of Jimmy Carter’s stagflation.

What we’re experiencing is the latest in a sequence of dominoes that began falling in the early 20th century. The first was the rise of progressivism wherein Americans came to view the federal government as a useful tool for achieving good rather than, as the Founders saw it, a dangerous tool for preventing harm. Normally, a two-party system would force a compromise between the two views. But progressives coalesced in the Democratic party and came to control the House, the Senate, and the White House, and to appoint a majority of the Supreme Court. From 1933 through 1947, U.S. politics was effectively a one-party system.

With progressives seeing the Constitution as a hindrance to social engineering, Congress started enacting legislation that went beyond its authority as clearly defined in Article I, Section 8. A sympathetic Supreme Court shifted its efforts from striking down unconstitutional legislation to constructing convoluted arguments as to why legislation was constitutional. As progressives came to populate both parties, that shift continued from the Court claiming that private activity on one’s own property constitutes “interstate commerce” (Wickard v. Filburn, 1942), to interpreting a law holding state actors accountable for crimes as making them immune from civil suits (Harlow v. Fitzgerald, 1982), to redefining as a tax what Congress said was a penalty (National Federation of Independent Business v. Sebelius, 2012), thus ensuring that the Affordable Care Act passed constitutional muster.

This erosion of constitutional constraints allowed the federal government to grow from 6 percent of GDP in 1933 to almost 30 percent today, and at significant cost. Even on a per-capita and inflation-adjusted basis, the federal budget today is more than 30 times what it was in 1933. Raising taxes is never popular, so politicians started to rely on borrowing to fund this spending because the constituency most harmed by borrowing – future generations – can’t vote the politicians out of office. In an ironic nod to the Founders, politicians found the way to grow government so large was taxation without representation.

But most lenders expect interest, and the way to borrow massive amounts without driving up interest rates is to borrow from a lender that can print all the money it wants: the Federal Reserve. Prior to 1933, the gold standard constrained how much money the Fed could print. Over decades, as the gold standard was slowly relaxed and then abolished, it became possible for the Fed to print as much as it liked.

With a federal debt doubling every eight years, the government’s need to borrow is growing faster than lenders’ willingness to lend. But the Fed is taking up the slack. Since the early 2000s, the Fed’s holdings of government debt have grown seven-fold, which puts the Fed close to eclipsing the Social Security trust fund as the government’s largest creditor.

Prolonged progressive control of the government led to a weakening of constitutional constraints, which led to explosive growth in the size and cost of government, which led to the need to abandon the gold standard, which encouraged politicians to borrow more and to rely on the Fed to monetize their deficits. And that is ushering in what will be an era of significant and sustained inflation.

It’s too late to stop the falling dominoes. All we can do is to look back at key points where we might have stopped them – like taking seriously the idea of a limited government and the principle of sound money – and make sure that we warn future generations not to repeat those errors.

But then again, the Founders warned us.

Antony Davies is associate professor of economics at Duquesne University and co-host of the weekly podcast Words & Number. He wrote this for InsideSources.
All Posts »