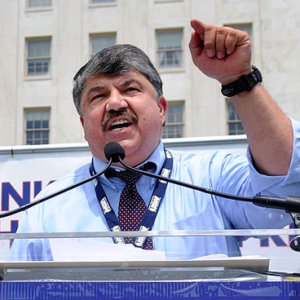 The U.S. labor movement is in the midst of an existential crisis. Its leaders know times are changing and they must do something if organized labor is to survive. But the last thing union bosses want to do is to change. And that is a problem.

Richard Trumka took over the reins of the AFL-CIO, the nation’s largest labor organization, in 2009 vowing to reverse its dwindling numbers by bringing the movement in line with the current generation of workers. When Trumka died August 5 of a heart attack at age 72, only 10.8 percent of the U.S. workforce was unionized, down from 12.3 percent when he became AFL-CIO president.

Like his predecessor, John Sweeney, Trumka talked about modernizing the AF-CIO from time to time.  But in practice, he fought a rear-guard battle to hold off the tide of change. He spent 12 years attempting to make Congress rewrite laws to pressure workers into joining unions. Fundamentally rethinking the labor movement was never seriously pursued. Workers would have to adapt to the movement, not vice versa.

Nostalgia drove the thinking of Trumka, Sweeney, and others in the movement. Unions were broadly popular in the mid-20th century. Precise numbers are hard to come by, but Census Bureau data indicate that about one-third of the nation’s entire workforce was unionized in 1950s. Because unions represented such a wide swath of the country, they were often inclined towards centrist policies and small “c” conservatism.

However, beginning in the mid-1970s, U.S. manufacturing, one of the mainstays of the labor movement, began to suffer. The U.S.’s post-World War II economic boom was partly due to a lack of competition. European and Japanese manufacturing had been shattered in the war. Foreign competition came roaring back in the mid-60s, and companies struggled as American consumers bought cheaper goods that were now available. Layoffs, factory closures, outsourcing, and moving operations abroad became common and the labor movement began to suffer. As new industries emerged, unions were slow to try to organize them — when they tried at all. The unionization rate was only 20.1 percent in 1981 according to the Labor Department, and it has been on a steady downward path ever since.

The labor movement’s centrist tendencies shrank along with its own decline. Sweeney saw the movement’s salvation in electing a more pro-union, and therefore more liberal, Congress. Democrats like Bill Clinton with his centrist “third way’-think would not suffice. Sweeney dedicated ever-larger amounts of members’ dues for this purpose.

Trumka, Sweeney’s hand-picked successor, pushed even further in that direction. He tried to get the Obama administration to pass the Employee Free Choice Act, legislation that would have rewritten the National Labor Relations Act to eliminate most workplace organizing elections. There wouldn’t be any pesky federally monitored elections to verify that a majority of workers actually wanted the union. The union’s claim would suffice.

More recently, Trumka was pushing the Biden administration to pass the Protecting the Right to Organize (PRO) Act. It would, among other things, strip 27 states of their right to work laws. They say an individual worker cannot be forced to join or otherwise financially contribute to a union. Nothing about a right-to-work law prevents workers from joining a union; it just makes it their personal choice.

Trumka was fond of claiming 60 million workers were interested in joining unions. But surely if that were the case it wouldn’t be necessary to get rid of the right-to-work laws or to eliminate workplace organizing elections. The workers wouldn’t invoke their right to work protections and would ensure unions won every workplace election.

Another provision in the PRO Act really highlights labor’s problematic thinking: Its requirement that the nation adopt California’s “ABC” rules for when a worker can be classified as a contractor – i.e., freelancer – as opposed to a traditional employee. The ABC rules prohibit companies from hiring contractors for anything relating to their main business and prohibit workers from accepting short-term contract work unless they’re full-time freelancers. This is intended to hobble so-called “gig economy” companies like Uber and Lyft that rely exclusively on contract work, which is far harder to organize than traditional employees. In practice, that would make it illegal for workers to have side hustles. Rideshare driving for a few hours a week for some quick cash would be prohibited. They could drive full-time or not all, but nothing in-between. To the PRO Act’s fans, that’s apparently better than coming up with some kind of alternate arrangement to accommodate those workers.

As a reporter, I interviewed Trumka enough over the years to discern that he believed his own rhetoric and did want to help workers. His approach was ultimately paternalistic, however. He believed he knew what the workers needed better than they did and he’d yank them back into line if necessary. If the labor movement is to survive it must change that way of thinking.

Sean Higgins is a research fellow at the Competitive Enterprise Institute, a free-market public policy organization in Washington. He wrote this for InsideSources.com.
All Posts »