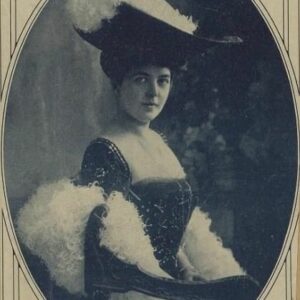 The president was proud as punch at Julia Dent Grant’s arrival on June 6, 1876. She immediately joined one of America’s most exclusive clubs as one of the dozen or so people born in the White House.

Named for her grandmother, also named Julia Dent Grant, she grew up considering the White House all but a second home. Christened in the East Room, she spent her childhood attending parties and events there.

Of her famous grandfather (who died when she was 8) she later recalled, “He held my pudgy, dimpled hand on the palm of his, and we learned to count the dimples and fingers together … he taught me ‘cat-cradle’ with a string.”

Being a Grant had advantages, which included celebrity status. Ulysses Grant was internationally famous — not for serving two terms as President of the United States —  but for being the general who had won the American Civil War. That VIP status gave young Julia entrée to the highest echelons of society.

Her father served as President Benjamin Harrison’s ambassador to Austria-Hungary, and Julia toured Europe as fashionable Victorian young ladies were expected to do. During a visit to Cannes, France she met and fell in love with a dashing Russian diplomat, Prince Mikhail Cantacuzéne. He proposed just two days after meeting Julia. A planned wedding was called off, but later they reunited.

When they finally did get married, in the social capital of Newport, R.I. in September 1899, Julia became Princess Cantacuzéne, the Countess Speranasky. In fact, the couple had two weddings; a Russian Orthodox ceremony came first, followed by an Episcopalian wedding the next day.

But marrying into the Russian monarchy carried a high price tag. Julia had to move to Russia, where her focus shifted from American republican politics to Romanov royal intrigue. The newlyweds settled in the imperial capital of St. Petersburg, but they also spent time at their extensive estate in Ukraine. They had three children: son Mikhail, daughter Zinaida, and another daughter called Barbara, who was nicknamed Bertha after her great-aunt. (One can only imagine the child explaining that usual name to her Russian playmates. “It’s an American thing. You wouldn’t understand.”)

When World War I began the prince was an aide to Czar Nicholas II, then became a general in the field. He was wounded in 1915 while commanding a 15,000 horseman attack, one of warfare’s last mass cavalry charges.

Then the 1917 Russian Revolution came, followed by Russia’s own Civil War. Everything changed overnight. Julia and her family were forced to flee — first to Finland, then to the U.S.

They settled in Washington. The couple rallied support for a counter-revolution until the Communists murdered Nicholas and his family. That killed their hopes for a Romanov restoration, though they remained active in the Russian expatriate community.

Julia and her prince finally settled in Sarasota, Fla., where he worked in her aunt’s farming and banking operations.

She helped support the family with her writing. Her work appeared in The New York Times, Saturday Evening Post, Woman’s Home Companion and other leading publications. She also penned three popular memoirs.

Still, the strain of so many ups and downs ultimately took its toll on the marriage. Julia and the prince divorced in 1934. He later remarried; she never did. A countess no more she regained her U.S. citizenship, dropped her old imperial titles, and rebranded herself simply Mrs. Julia Grant Cantacuzéne.

Time eventually caught up with the former noblewoman. She was going blind before she turned 80, though incredibly her vision partially returned in the final two weeks of her life. Her last years were spent enjoying her six grandchildren, 22 great-grandchildren, and three great-great-grandchildren before quietly slipping away in 1975 at age 99.

The life that began in the aftermath of Appomattox stretched into the depths of the Cold War. She had seen governments rise and fall, old dynasties swept away and a new world emerge from their rubble. And throughout it all, she carried herself with dignity and style and wrote about her many remarkable experiences with tender deftness.

You can’t help believing the old general would have been proud of his little princess.