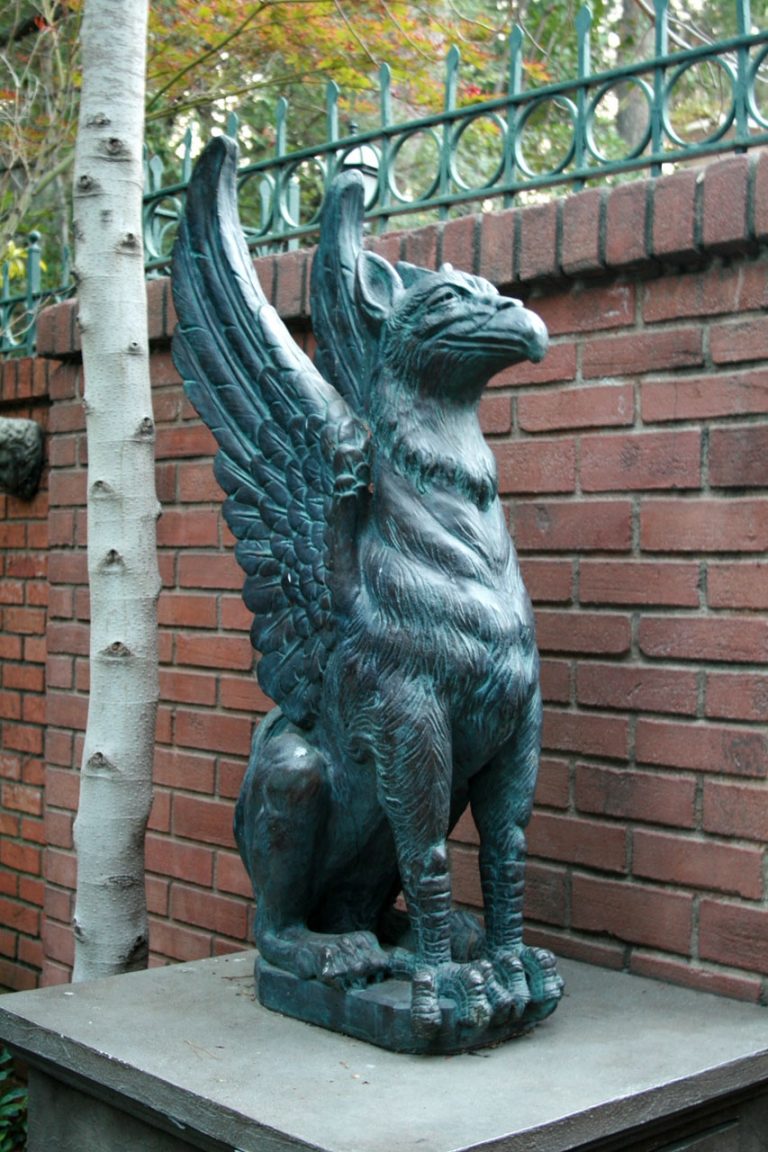 Everyone loves a good story, especially if it’s based on something true.

Consider the Greek legend of the Titanomachy, in which the Olympian gods, led by Zeus, vanquish the previous generation of immortals, the Titans. As recounted by the Greek poet Hesiod, this conflict makes for a thrilling tale – and it may preserve kernels of truth.

The eruption around 1650 B.C. of the Thera volcano could have inspired Hesiod’s narrative. More powerful than Krakatoa, this ancient cataclysm in the southern Aegean Sea would have been witnessed by anyone living within hundreds of miles of the blast. 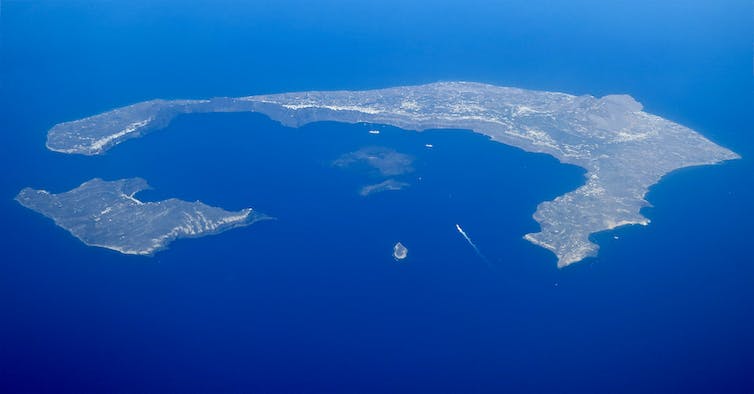 Historian of science Mott Greene argues that key moments from the Titanomachy map on to the eruption’s “signature.” For example, Hesiod notes that loud rumbles emanated from the ground as the armies clashed; seismologists now know that harmonic tremors – small earthquakes that sometimes precede eruptions – often produce similar sounds. And the impression of the sky – “wide Heaven” – shaking during the battle could have been inspired by shock waves in the air caused by the volcanic explosion. Hence, the Titanomachy may represent the creative misreading of a natural event.

Greene’s conjecture is an example of geomythology, a field of study that gleans scientific truths from legends and myths. Created by geologist Dorothy Vitaliano nearly 50 years ago, geomythology focuses on tales that may record, however dimly, occurrences like volcanic eruptions, tsunamis and earthquakes, as well as their aftereffects, such as the exposures of strange-looking bones. These events appear to have been, in some cases, so traumatic or wonder-inducing that they may have inspired preliterate peoples to “explain” them through fables.

I’ve just published the first textbook in the field, “Geomythology: How Common Stories Reflect Earth Events.” As the book demonstrates, researchers in both the sciences and the humanities practice geomythology. In fact, geomythology’s hybrid nature may help to bridge the gap between the two cultures. And despite its orientation toward the past, geomythology might also provide powerful resources for meeting environmental challenges in the future. 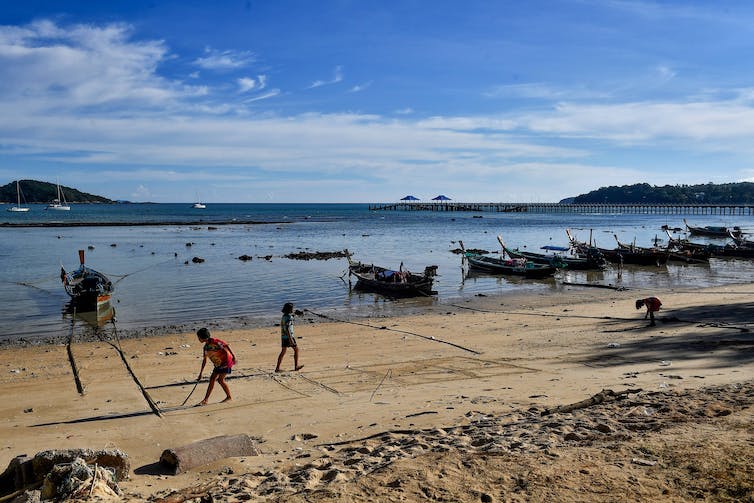 Passed-down tales that explain the world

Some geomyths are relatively well known. One comes from the Moken people in Thailand, who survived the 2004 tsunami in the Indian Ocean, a catastrophe that killed some 228,000 people. On that terrible day, the Moken heeded an old tale about the “laboon”, or “monster wave,” a legend passed down to them over countless campfires.

According to the fable, from time to time a people-devouring wave would surge and move far inland. However, those who fled to high ground in time, or, counterintuitively, put out into deeper waters, would survive. Following the legend’s advice, the Moken preserved their lives.

Other geomyths might have started as explanations for prehistoric remains that didn’t readily map onto any known creature.

The Cyclopes, the tribe of one-eyed ogres that terrorized Odysseus and his crew, might have sprung from the findings of prehistoric elephant skulls in Greece and Italy. In 1914, paleontologist Othenio Abel pointed out that these fossils feature large facial cavities in front, from which the trunk would have protruded. The eye sockets, by contrast, are easily overlooked on the sides of the cranium. To the ancient Greeks who dug them up, these skulls might have seemed like the remains of monocular, humanoid giants.

The seemingly fanciful griffin – the eagle-headed, lion-bodied hybrid – might have a similar origin story and could be based on the creative misrecognition of Protoceratops dinosaur remains in the Gobi Desert.

Still other geomyths may point to natural events. Indigenous tales tell of “fire devils” that flew down from the Sun and plunged to Earth, killing everything in the vicinity when they landed. These “devils” were probably meteors witnessed by Aboriginal Australians. In some cases, the tales anticipate findings of Western science by decades, even centuries.

Numerous African folktales ascribe mischief to certain lakes, including the lakes’ apparent ability to change color, shift locations and even turn deadly. Such legends have been corroborated by actual events. The most notorious example is the “explosion” of Cameroon’s Lake Nyos in 1986 when carbon dioxide, long trapped on the bottom, abruptly surfaced. Within a day, 1,746 people, along with thousands of birds, insects and livestock, were suffocated by the CO2 cloud the lake burped up. Lakes are sometimes associated with death and the underworld in Mediterranean stories as well: Lake Avernus, near Naples, is mythologized as such in Virgil’s “Aeneid.”

Animal encounters may inform other geomyths. Herodotus’ “Histories”, written about 430 B.C., claims that dog-sized ants guard certain gold deposits in regions of East Asia. In his 1984 book “The Ants’s Gold: The Discovery of the Greek El Dorado in the Himalayas,” ethnologist Michel Peissel uncovered Herodotus’ possible inspiration: mountain-dwelling marmots, who to this day “mine” gold by layering their nests with gold dust.

Fanciful stories that feed into science

Geomythology is not a science. The old stories are often garbled or contradictory, and it’s always possible that they preceded the real events that today’s researchers link them with. Imaginative pre-scientific peoples might well have dreamed up various tales out of whole cloth and only later found “confirmation” in Earth events or discoveries.

Yet as noted, geomyths like the griffin and Cyclopes arose from specific geographical regions that feature remains not found elsewhere. The likelihood of preliterate peoples first inventing tales that then somehow corresponded closely to later fossil finds seems like a stunning coincidence. More likely, at least with some geotales, the discoveries preceded the narratives.

Either way, geomythology can serve as a valuable ally to science. Most often, it can help to corroborate scientific findings.

Yet geomyths can sometimes go further and correct scientific results or raise alternative hypotheses. For example, geologist Donald Swanson argues that the Pele legends of Hawaii suggest that the Kilauea volcanic caldera was formed considerably earlier than previous studies had indicated. He alleges that “volcanologists were led astray” in their research on the caldera’s age “by not paying close attention to the Hawaiian oral traditions.”

Though focused on the past, geomythology may also help to set future scientific agendas. Today’s researchers might become familiar with myths that feature weird creatures or extreme weather, and then examine the stories’ places of origins for geological and paleontological clues. Such tales might provide invaluable links with real occurrences that took place long before there was a scientist around to record them. Indeed, such stories could have endured precisely because they memorialized a traumatic or wrenching incident and were thus passed down from one generation to the next as a literal cautionary tale.

Another exciting area for geomythical study is not just the researching of old myths but the creation of new ones that could alert future generations of potential dangers, whether these peoples might live in tsunami-prone regions, near nuclear waste sites like Yucca Mountain, or in some equally risky area.

Nuclear waste can remain radioactive for mind-boggling amounts of time, in some cases up to many tens of thousands of years. While placing warning labels on deposits of radioactive materials seems sensible, languages morph constantly and there’s no guarantee that present-day ones will even be spoken, let alone be understandable, in the distant future. Indeed, even stranger to contemplate is the extinction of the human race, an event that some philosophers see as potentially closer than we might think. How, if at all, might we warn our distant progeny or, beyond them, our eventual post-human successors?

[Insight, in your inbox each day. You can get it with The Conversation’s email newsletter.]

Creating notification systems that persist throughout time is an area in which myths could be useful. Famous tales often last for many generations, sometimes proving more durable than the languages in which they were first told or spoken. Indeed, C.S. Lewis wrote that one hallmark of myth is that it “would equally delight and nourish if it had reached [us] by some medium which involved no words at all – say by a mime, or a film.”

Because they are less tied to language than literature is, myths may be easier to transmit across cultures and time. The oldest one currently on record is an Aboriginal tale concerning a volcano; it may be 35,000 years old.

Geomythology could thus contribute to a linguistic field known as nuclear semiotics, which grapples with the problem of warning distant generations about hazardous waste. An intentionally created geomyth might preserve and transmit crucial information from the nuclear age to our descendants, with considerable effectiveness.