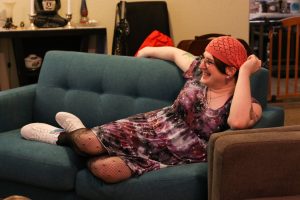 In the Zoom window, Odele Pax looks small, contained. Her boisterous laugh and candor belie her many mentions of how nervous she is. Pax holds back tears as she talks about her journey toward gender affirmation.

“There are no words to describe how liberating it feels, you know, that, finally, I not only know who I am, but I get to turn to the world and say, ‘Look … this has always been who I am,’” Pax said.

Pax, originally from New York City and now living in Queen Creek, is referring to the process of legally changing her name to match her trans femme label. She’s one of more than 100 people who reached out to Daniel Riley, a family attorney with Curry, Pearson and Wooten, on his offer to do pro bono gender-confirming name changes for trans and nonbinary people in honor of Pride month in June.

Riley said the need is great in the LGBTQ+ community for name changes, and he hopes to make it a bigger project. He’s not taking new clients at present.

“It would definitely be a more systematic approach next year, now that we know the kind of response we’re going to see,” he said.

Riley, who has practiced in metro Phoenix for 11 years, said he made his offer because name changes are easy for lawyers and life-changing for clients.

“One of the messages that I keep receiving is that the reason people want this so much and want to be able to go through the legal name-change process is that it gives them the power to decide who, when and where they’re going to share their story,” he said.

Riley estimated the value of the donated services was about $75,000, but pro bono doesn’t mean free. The 12 other attorneys who joined Riley’s effort aren’t charging for their services, but courts still require filing fees, which are around $350. Riley said his team is completing applications for fee waivers for those who might qualify.

As of mid-July, the team had submitted 116 name change petitions. After submission, a hearing is scheduled and heard by court commissioners in superior court. Clients are later notified of next steps to obtain documents with their new name. So far, at least 5 people have been granted name changes and at least 20 others are in progress.

One of the volunteers is Samantha Sawyer, an attorney at Zelms, Erlich and Mack in Phoenix. She joined because she went through the name-change process herself due to a mistake on her birth certificate.

“I’d like to try and find some way to use my power for good,” Sawyer said, joking.

Sawyer said she looked forward to getting to know clients and using her position to ease the stress that comes with any legal proceeding.

“I’m dealing with a real person and a real experience that could, you know, totally upend their life. (That’s) when you become more of the advocate,” she said.

Riley said the first responses he received from clients set the tone for the whole project.

“People would reach out and say, ‘I really want this, this would mean so much to me in my life, but I don’t want to take a slot someone younger than me could take or a person of color might be able to take advantage of,” he said.

Those are just a few ways that Tyler Eppinger’s deadname appears in his life. A deadname is the name someone was called before they started a transition or recognized their identity.

“That’s something very detrimental to mental health and something that can push people over the edge,” he said.

Eppinger, from Buckeye, said legally changing his name will help family members who deadname him and use incorrect pronouns to take his transition more seriously.

Therapy has played a role in Eppinger’s path to gender affirmation. Although he’s not in therapy directly related to his transition, Eppinger said confronting his trauma has given him the confidence to come out.

“Now I’m actually being myself and getting a voice and realizing I can say how I feel whether that’s going to make someone upset or not … that’s what really helped me come to terms with actually being trans,” he said.

For Pax, a struggle with mental health is what delayed her name change. Pax, who has ADHD and dyslexia, said she’s relearning how ADHD affects her now that she’s on estrogen. She had struggled with the name change process for about a month before contacting Riley.

“The dyslexia always makes paperwork really hard for me,” she said, “so no matter how hard I try to convince myself (that) I can do this myself … that I’m strong and powerful, now I need help.”

Pax said there is a need for more services like this in the LGBTQ+ community because of how daunting legal proceedings can be.

“I was terrified of just three stacks of paperwork. How many other people are terrified of the entire process? Having people step up and say, ‘I’m here, I’ll help you get through it’ – that means a lot to the community.”

Riley has offered pro bono name changes for the past two years and didn’t get much of a response. This year, he was overwhelmed by how many people applied.

Eppinger, 20, and Pax, 35, credit social media’s heightened popularity during the pandemic for the response to Riley’s offer.

Pax had a rough year and lost her job even before the pandemic started in March 2020, and while at home, she struggled to find work. The beginning of her mental health journey, her transition and the pandemic converged at once, and she sought solace and solidarity online. Pax was stunned by the number of “brothers and sisters” she saw on message boards talking about how they had been hiding so much of who they are.

“All of a sudden, social media, during this time of lockdown and self-reflection, was the only way the world could speak to each other,” Pax said.

She credits “Zillenials” – people on the cusp between millennials and Generation Z – for leading the “social media charge to be accepting of who we really are” and how that gave room for people of all ages to come out.

Eppinger is among the Gen Zers who turned to social media for support on navigating his trans identity.

“A lot of kids don’t have that kind of support in their home, so we’re growing up kind of clueless,” he said.

TikTok has been especially influential in Eppinger’s social media exploration of identity. Such topics as top and bottom surgery aren’t widely talked about in society, he said, so he has sought guidance from the community about issues that come up during his transition. In a post about how his testosterone shots weren’t going well, Eppinger said other trans men gave him advice and asked about his experience.

“Creators that are transgender share that part of their life on social media, so watching the healing of their scars … and watching them change their name … was something I was always obsessed with,” Eppinger said.

Name changes aren’t the only legal concerns that the LGBTQ+ community has. Adoptions and employment discrimination are among cases that attorney Nathan Arrowsmith at Tran Arrowsmith, a visibly queer law firm in Phoenix, sees on a regular basis.

“Our goal is just to be, you know, available to queer people regardless of what their issue is,” Arrowsmith said.

Tran Arrowsmith’s visible queerness is intentional. For clients, he said, it’s important for them to know they’re not alone.

When a client doesn’t have to have to explain what things like gender identity and gender expression are, Arrowsmith said, it makes them feel more at ease.

Advocacy is part of his job, Arrowsmith said. Something that makes sense to him might not be common knowledge outside the LGBTQ+ community.

“It’s not always just about focusing on the legal argument. We’ve got to make sure people we lay the foundation for that by making sure folks understand the terminology and things like that.”

Arrowsmith said it’s important for him to do that work so that the client doesn’t have to.

Out of the closet, into the light

If core identities aren’t acknowledged, Pax said, people can feel that something is missing.

“However many of us felt like, until the point where we came out of the closet … like up until we really stepped into that light, that we didn’t really exist,” she said.

But people often assured Pax that once she hit a stride in her transition, everything would fall into place. When Pax heard the name Odele – Greek for melody – it sounded right. And right before she started her hormones, she got the job that helped her survive the pandemic last October.

“For the first time in 35 years, I can say, unequivocally, even on my worst days, I feel happy. I feel whole. It’s all because I found my melody.”