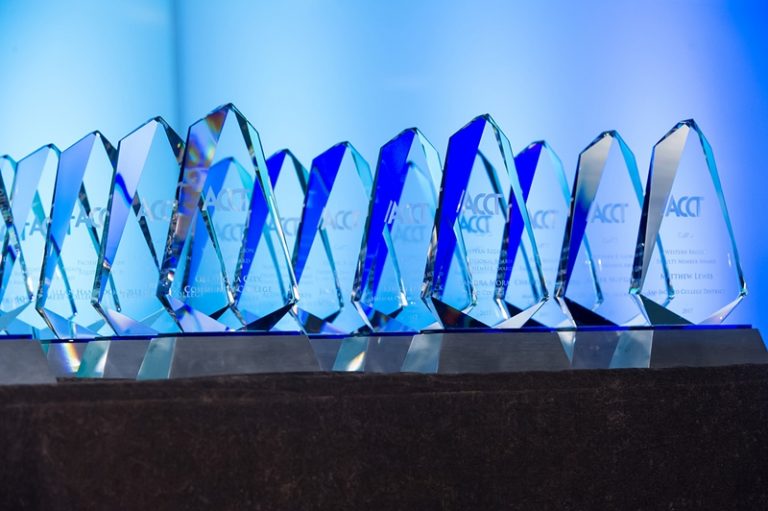 Yavapai College President Dr. Lisa Rhine received national recognition for her leadership in higher education, when the Association of Community College Trustees (ACCT) named her the recipient of its Pacific Region CEO Award.

“In the midst of a pandemic,” her nomination reads, “Dr. Rhine has initiated a remarkable number of key initiatives and innovative programs with an unrelenting focus on student success.”

Each year, the Association of Community College Trustees – a 52-year-old organization comprised of trustees from over 1,200 colleges in North America – honors a chief executive officer from each of its five regions who has exhibited exceptional leadership.

The ACCT honor comes less than three years into Dr. Rhine’s tenure at YC. The child of a low-income, single-parent home, she worked her way through college with the help of an athletic scholarship. She received her bachelor’s degree from Wright State, and her master’s degree from the University of Dayton before earning her Ph.D. in Educational Administration from Capella University. She was named Yavapai College’s tenth president in January 2019.

“I am so pleased that Dr. Rhine has won the ACCT Pacific Regional award.” Yavapai College District Governing Board Chair Deb McCasland said. “I know we have an outstanding President and it’s excellent that her leadership and focus on student success is highly valued by other leaders in the Community College field.

The Association of Community College Trustees is a non-profit educational organization of governing boards, representing trustees who govern community, technical, and junior colleges in the United States and beyond. Their mission is to foster the exemplary governance while promoting high quality and affordable higher education, cutting-edge workforce and development training and student success.

The ACCT will present the award to Dr. Rhine at their 52nd Leadership Congress, which will be held in October at the Manchester Grand Hyatt Hotel in San Diego. She will be honored with other award winners at the Regional Awards Luncheon before receiving her individual award at the ACCT’s Annual Awards Gala, Friday night, October 15.

“I am honored and grateful just to be nominated for this award, let alone win it,” said Dr. Rhine. “Thank you to ACCT, the Yavapai College District Governing Board, our Executive Leadership Team, and all of Yavapai College’s amazing faculty and staff. An award like this can only be achieved with hard work and dedication from an entire organization, so thank you all!”