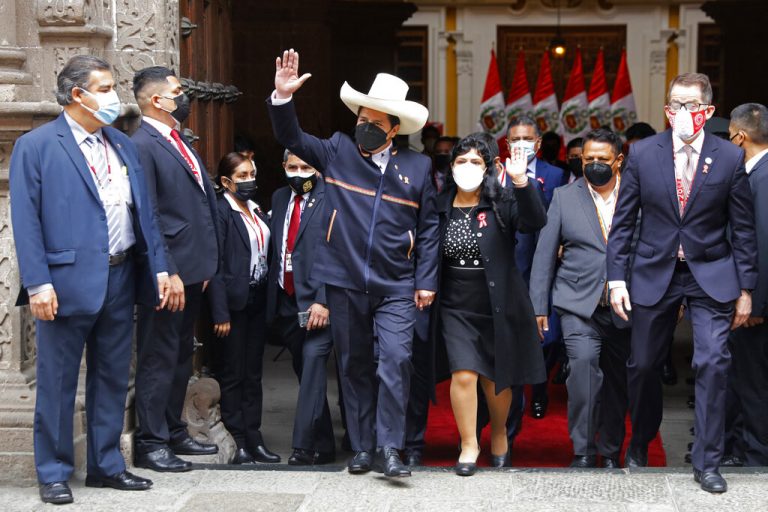 Pedro Castillo, a leftist political novice who has promised to be a champion of his country’s poor, on Wednesday became Peru’s new president.

The rural teacher who has never held political office before was sworn in less than two weeks after he was declared the winner of the June 6 runoff election. He is Peru’s first president of peasant origin.

In a ceremony in the capital of Lima, Castillo made a commitment “for God, for my family, for my peasant sisters and brothers, teachers, patrolmen, children, youth and women, and for a new Constitution.” He then sang the national anthem, taking off his signature hat and placing it over his heart.

He succeeds President Francisco Sagasti, whom Congress appointed in November to lead the South American nation after weeks of political turmoil.

Castillo, who up until days ago lived with his family in an adobe home deep in the Andes, will face a deeply divided Congress that will make it extremely challenging for him to fulfill his ill-defined campaign promises to aid the poor, who are now estimated to make up about a third of the country’s population. His political savviness will be immediately tested, and his ability to reach agreements could even determine if Congress allows him to finish his term.

“The government of Pedro Castillo still maintains us with considerable uncertainty; we still do not have clear his main lines of policy,” said Claudia Navas, an analyst with the global firm Control Risks. “However, we foresee that possibly, due to the characteristics of the Peruvian political system and the current general political and economic situation of the country, Castillo will maintain a more pragmatic position than he announced during the campaign.”

“The key is to build those consensuses and add strength to the proposals on how he is going to achieve them,” she added.

Castillo defeated his opponent, right-wing career politician Keiko Fujimori, by just 44,000 votes. Peru’s poor and rural citizens supported Castillo and his slogan “No more poor in a rich country,” while the elites favored Fujimori, the daughter of controversial former president Alberto Fujimori. He stunned voters and observers by rising from a pool of 18 candidates and advancing to the runoff, in first place no less.

Castillo’s initial proposal to nationalize the nation’s mining industry set off alarm bells among business leaders. While that stance has softened, he remains committed to rewriting the constitution that was approved under the regime of Fujimori’s father.

Peru is the second largest copper exporter in the world and mining accounts for almost 10% of its GDP and 60% of its exports. Its economy has been crushed by the coronavirus pandemic, increasing the poverty level and eliminating the gains of a decade.

“I want you to know that the pride and pain of deep Peru runs through my veins. That I, too, am the son of this country founded on the sweat of my ancestors, built on the lack of opportunity of my parents and that despite that, I also saw it resist,” Castillo said. “That my life was made in the cold of the early mornings in the field, and that it was also these hands from the countryside that carried and rocked my children when they were little. That the history of this long-silenced Peru is also my history.”

In November, Peru had three presidents in a single week after one was impeached by Congress over corruption allegations and protests forced his successor to resign. Lawmakers then appointed Sagasti.

Thousands of small businesses have closed over the past 16 months, and the political uncertainty following the election has led to the withdrawal of millions of dollars from local banks.

Enrique Castellanos, an economics professor at the Peruvian University of the Pacific, told a radio station that Castillo must build trust in the business community.

“Confidence takes time to maintain and it goes away very quickly,” he said.

The pandemic has pushed Peru’s medical and cemetery infrastructure beyond capacity. It has also deepened people’s mistrust of government as it mismanaged the COVID-19 response and a secret vaccination drive for the well-connected erupted into a national scandal.

Castillo has promised COVID-19 vaccines for all Peruvians.

Castillo until recently was a rural schoolteacher in the country’s third-poorest district. The son of illiterate peasants, he led a teachers’ strike in 2017.

The new president has lived with his wife and two children in an adobe home that he built in rural Chugur more than 20 years ago. On Wednesday, he announced he will not govern from the neo-baroque presidential palace, which he said will become a museum.

That follows a trend among some recent Latin American leaders, who have preached austerity.

In Bolivia, then President Evo Morales ditched the colonial presidential palace and turned it into a museum. But he then was heavily criticized for building a 29-story skyscraper to house offices and his home at a cost of more than $30 million.

In Mexico, current President Andres Manuel Lopez Obrador shunned the presidential compound of Los Pinos and opened it to the public. He moved into the old national palace, where no president had lived since the late 19th century.

Several delegations from other countries traveled to witness Peru’s presidential transition. Those attending included U.S. Secretary of Education Miguel Cardona, who was also a schoolteacher, the King of Spain Felipe VI, and the leaders of Chile, Sebastián Piñera; Colombia, Iván Duque; and Ecuador, Guillermo Lasso.

Duque met with Castillo before the inauguration. Duque said they agreed to continue strengthening the participation of both countries in both the Andean community and the Pacific Alliance and spoke about the binational social agenda that includes health and education issues.

Duque told reporters that rewriting a constitution, like Castillo has proposed, is a “sovereign decision” of each country. But he pointed out that “any constitutional reform process must be the product of a great national consensus, it has to be an opportunity for union and not division.”