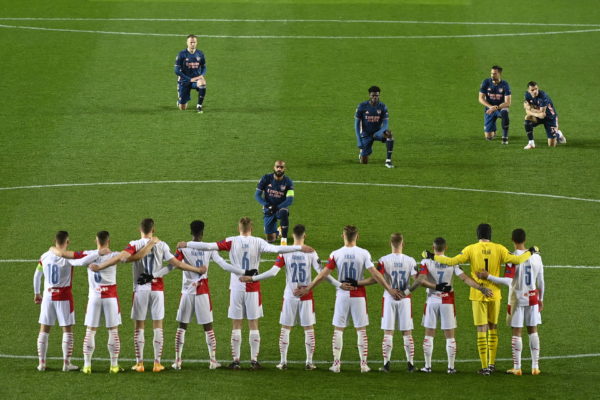 In A Man for All Seasons, Sir Thomas More rebukes another character who betrays him in return for a regional appointment. “It profits a man nothing to give his soul for the whole world, but for Wales?” In like manner, I ask what have we gained from importing the whole world? Thanks to mass immigration, our countries are sunk in crime, corruption, and self-loathing. One excuse is that this was necessary for white nations to have good soccer teams.

In 2018, the “French” team won the World Cup. Most of the team was non-white. The Washington Post, the Guardian, and the Daily Maverick all praised this. The UK Independent called a game between two multiracial teams a “celebration of immigration.” The French victory was a victory for multiracialism.

The all-white Croatian team came in second, which suggests that multiracialism isn’t necessary. Nonetheless, France won, and even though the country was dealing with non-white rioting, many thought France had a national triumph thanks to diversity. 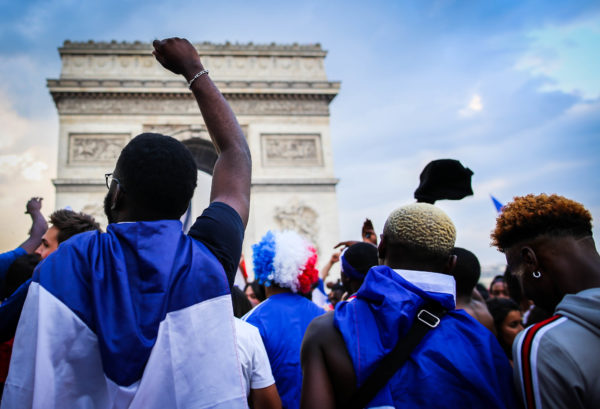 July 15, 2018 – Paris, France – The celebration of the victory of the French team on the Champs-Elysee and in all Paris after the final of the World Cup football France-Croatia. (Credit Image: © Sadak Souici / Le Pictorium Agency via ZUMA Press)

It seemed like the same thing would happen this year. The “English” team, mostly non-white, was marching to victory at the UEFA European Championship. Reporters were already writing the story. The diverse English team would be a triumph over petty English nationalism. Non-whites winning a soccer game would revitalize and even redefine the nation.

The English team was also “taking a knee” before games, so it represented a superior, anti-racist England that might exist someday. When English fans booed the gesture, some reporters said this was racism.

Unfortunately for journalists, there was still a game to be played. Both teams – England and Italy –  “took a knee,” but England was the team of “diversity.” It came down to penalty kicks, a kind of overtime. Black players on the English team would decide the game.

We know what would have happened if the black players had scored. There would be countless articles about blacks saving English soccer, and thus England itself. It would be a mighty weapon against English nationalists. Knighthoods might be in order.

The idea that blacks are inherently better at sports was floating through the stands. These fans are chanting, “Give it to a black guy, he’ll score!” They were mostly non-white, but some English were in the crowd.

It didn’t work out that way. Black “English” players Bukayo Saka, Macus Rashford, and Jadon Sancho missed their kicks. Even worse, the Italian team that won is actually Italian. The problem for the media is that if you set up a soccer game as a political competition, it’s a disaster if your team loses and the white guys win.

The government, the media, and the monarchy acted against social-media criticism of the black players who lost the game for England. The Guardian and “Hope Not Hate” “found more than 120 instances of England players receiving racial abuse on Twitter in the hours following the game.” Prime Minister Boris Johnson was already reeling from media attacks because he didn’t admonish fans who had booed the “take the knee” gesture, so, perhaps to counter this, his government pledged to ban anyone guilty of “racist abuse” from all soccer games. The Independent called this “closing a legal loophole.” The British government wants to punish Facebook and Twitter for not doing enough to stop the comments. Prince William himself said he was “sickened” by anti-black comments. This was briefly the most important story in England.

If England had won, media would be celebrating the blacks who brought the championship “home” and showed up the “racists.” Instead, a white team brought it back to Rome, so the press and politicians lectured English whites about racism. Win or lose, the result of the European championship was a demoralization campaign against English whites.

The United Kingdom is not free. There is no free speech, freedom of association, or freedom to bear arms. Owning the wrong books can mean jail. The state church — the Church of England — is anti-white. The state media, the BBC, is anti-white. The monarchy is pleading that it is not racist, and the Duke and Duchess of Sussex (Prince Harry and Meghan Markle) are anti-white. Even memorials to Winston Churchill are in danger.

There’s very little opposition to this. Instead, we see anger from white fans because black players missed penalty kicks. It’s pathetic that the English are furious over a soccer game, but tolerate the destruction of their country. These fans probably would have worshipped the black players if they had scored.

Still, the reaction from the British government and the press is worse. Obviously, people shouldn’t send racial taunts to black players. On the other hand, insulting opposing players is normally part of the game. Only when it is racial, it is apparently criminal.

If it is a national disaster when black athletes lose a game, then let’s skip the games. Just change the rules and give non-whites the trophy to spare everyone’s feelings. That seems to be the trend with the Oscars and debate competitions. 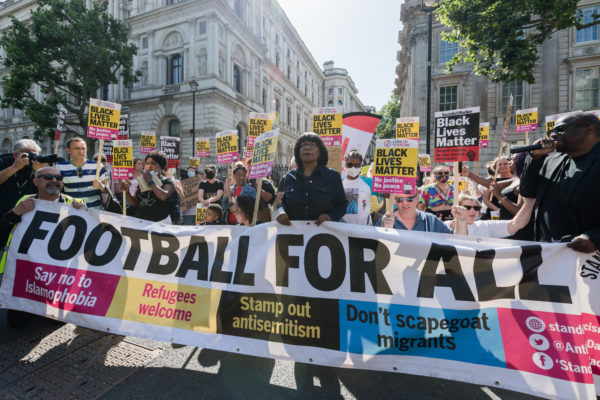 What is the point of the English soccer team? If it is a collection of players from around the world who happen to wear an English jersey, what makes it English? It’s just a brand. Rooting for it is as silly as cheering for Coca-Cola or Pepsi. The Italian team has a real connection to its people, so its victory was a victory for Italy. That’s what a national team should be.

People like sports because it allows for pure expressions of loyalty and opposition, victory and defeat, and feelings of “us” and “them.” It’s a socially acceptable way to express primal drives. Diversity poisons sports, just as it poisons everything else. English fans can’t identify with their team. A true English patriot should be relieved that “his” team lost, and his country was spared weeks of lectures about why England needs blacks.

Whites lack symbols, representation, and ways of expressing common interests and identity. Until we restore them, let us mock the facades our rulers have put in their places. If Britain is in crisis because some black guys choked during a soccer game, the system isn’t as strong as it appears.

I don’t think soccer is politically important, but our rulers disagree. So let’s celebrate when the best players in Europe are a bunch of white guys. Forza Azzurri!

Mr. Hood is a staff writer for American Renaissance. He has been active in conservative groups in the US. You can follow him on: Gab.
All Posts »

PrevPreviousBeware of budget gimmicks in push for massive spending deals
NextArizonans in Tokyo: Athletes with local ties to watch in the Tokyo OlympicsNext