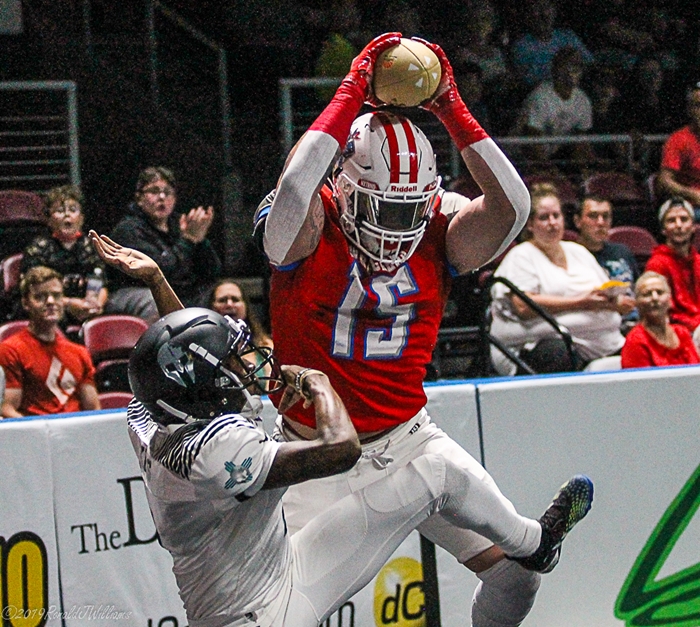 The Duke City Gladiators knocked off the Arizona Wranglers 71-54 in a quick hitting battle last night at the Prescott Valley Events Center. Another very good crowd was on hand to see the high scoring, sometimes chippy, game.

The Wranglers fell behind, tying the game on three different occasions, but never were able to take the lead.  The game was close till Duke City picked off a couple of passes late in the game to seal the deal.

Xavier Amy scored the first of his four touchdowns on a 23 yard reception from Gladiator QB Nate Davis. NAZ tied the game at 7 with 10:34 in the opening quarter on a 20 yard run by Rob Brown, and the PAT by Timothy Parker.

After Duke City scored when Davis hit Jared Elmore on a 3 yard slant to go up 14-7, quarterback Verlon Reed Jr. hit Skylor Clinton as he went up high over the defender Jimmy Keys to pull the ball in for a 25 yard  touchdown reception. The extra point attempt kick was deflected, leaving the home team down by one, at 14-13 with 4:58 in the quarter.

The Gladiators added one more TD to close out the first quarter for a 20-13 lead, as Raymond Taylor ran the ball in from 12 yards out. Then Elmore was the recipient again from Davis on a 16 touchdown pass to lead 28-13, after Duke City was given three opportunities to get the extra point, finally going for two, with 7:44 in the second quarter.

Three touchdowns were scored in the final two minutes of the half. Skylor Clinton scored his second touchdown of the game with a 2 yard run, pulling the Wranglers to within 8 at 28-20.  DC followed with a 15 yard pass from Davis to Raymond Taylor, and it was 35-20. The Wranglers closed out the half on a high note when Reed Jr. hit James Briania-Hopp on a 9 yard strike with :13 left to end the half trailing 35-27.

The second half saw the Wranglers tie the game at 35 with 12:31 on the clock when Reed Jr. broke the across  the goal line from one yard out.

The Gladiators needed just one play to take the lead, when Xavier Amy took a pass in stride from 29 yards out to put Duke City back on top 42-35.

Todd Athey scored the first of his back to back touchdowns on a 27 yard pass from Reed Jr, to tie the game at 42. DC would go ahead yet again when Davis hit Amy in stride for a 25 yard one play scoring strike again to lead 49-42 with 6:48 left in the third.

A huge momentum swing was about to take place, but Wrangler faithful erupted to Athey catching a 20 yard pass for what was about to be a game tying TD, but the extra point attempt was blocked and returned 48 yards by Antwan Smith, as the home crowd watched in somewhat disbelief. Instead of a tie game at 49, the Wranglers found themselves down 51-48 and kicking the ball off to the Gladiators with 3:25 remaining in the third quarter.

Duke City would score to increase the lead to 58-48 on a Davis 12 yard run. Rob Brown would rush in the only touchdown of the final quarter by the Wranglers, closing the gap to 58-54.  A pair of costly interceptions thrown by Reed Jr. ended the game for Northern Arizona, as the Wranglers fall to (1-8) on the season. The Gladiators improve to (4-5).

Northern Arizona will spend the next three games on the road before returning home on Sunday, August 15 to face the Massachusetts Pirates, who upset the Arizona Rattlers earlier today. Kickoff for that game is set for 3:05 pm.