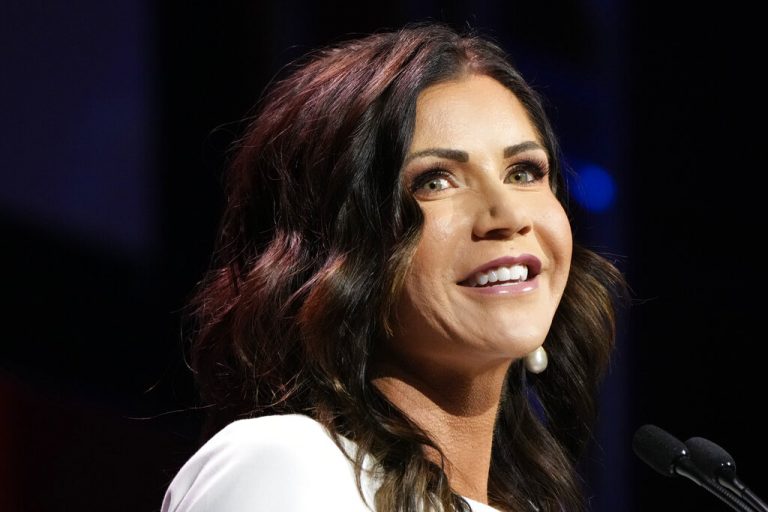 More than 18 months before the first presidential primary of 2024, most potential Republican candidates are just getting a sense of the political landscape, tiptoeing through early-voting states and trying to make friends in key places. Then there’s Kristi Noem.

The South Dakota governor has come out swinging as she tries to carve a niche among an early crowd of possible GOP rivals for the White House. Her combative style, no surprise to those who follow her, is evidence of how competitive the nomination race will be if Donald Trump stays on the sidelines.

Noem charged into Iowa on Friday singing a battle hymn and armed with barbed comments for her fellow GOP governors. At a conservative gathering in Des Moines, she told the crowd she “really hates this America” under President Joe Biden’s leadership, then led them in singing “The Battle Hymn of the Republic.”

But Noem didn’t just take aim at political foes. She also unleashed sharp-edged comments on those within her own party, accusing fellow GOP governors of “rewriting history” by claiming they kept their states open during the pandemic.

“To pretend that they didn’t take actions that they had no authority to take isn’t standing on truth,” she told reporters Friday.

It’s easy to see why the 49-year-old governor, who is known as a scorched-earth campaigner in her home state, is elbowing out anyone trying to claim a more hands-off approach to the pandemic. She doesn’t have the experience of working alongside Trump, like Mike Pence, Nikki Haley or Mike Pompeo — all of whom have visited the presidential-proving ground of Iowa in recent days. Other potential rivals like Florida Gov. Ron DeSantis and Texas Gov. Greg Abbott have the advantage of governing states that figure prominently in national politics.

The pandemic was rocket fuel for Noem’s political rise. While she had been laying the groundwork to build a national profile and looking for ways to make South Dakota a testing ground for conservative policies, she jumped on decrying coronavirus restrictions early.

Conservatives nationwide have since made efforts to try to halt the pandemic’s spread into a favorite punching bag. At the Family Leadership Summit, where Noem spoke alongside Pence, Pompeo and Iowa Gov. Kim Reynolds, speakers warned that government restrictions were eroding personal liberties. DeSantis has even begun selling “Don’t Fauci My Florida” merchandise to raise money for his gubernatorial reelection campaign, taking aim at another favorite target, the nation’s top infectious diseases expert, Dr. Anthony Fauci.

Noem didn’t mention DeSantis by name during a Sunday speech at another conservative conference in Texas, but seemed to single him out when she accused other GOP governors of “pretending” they didn’t shut down their beaches.

“All I’m saying is that we need leaders with grit. That their first instinct is to make the right decision,” Noem told the audience at the Conservative Political Action Conference.

But as an early wave of virus cases hit her state in the spring of last year, Noem initially showed a willingness to step in and use the force of her office. She declared an emergency and told schools to close, urged a meatpacking plant to temporarily shutter after an outbreak among workers, and even issued a stay-at-home order in two hard-hit counties for people over 65 or vulnerable to the virus.

While Noem never ordered businesses to close, many did so anyway. And city leaders, frustrated with Noem’s inaction, issued their own orders that forced many to shutter for weeks in the spring.

As the response to the virus became increasingly politicized, however, Noem moved to the forefront of governors railing against government orders. By June of 2020, her message had shifted: “More freedom, not more government is the answer.”

With an eye on the economic and mental health ripple effects of the pandemic, she frequently touted the fact that her state has one of the lowest unemployment rates in the nation and a growing economy.

But even as virus cases and deaths surged last year, she refused to urge people to wear masks in public. Instead, the state spent more in federal coronavirus funds on an ad campaign inviting tourists to visit than it did on public health advertising.

As her appearances on Fox News increased, conservatives across the country began suggesting she run for president. Noem has demurred when asked publicly about her White House ambitions and says she is focused on next year’s gubernatorial campaign. But recent actions — from registering a federal political action committee to hitting the nationwide speaking circuit — show she has her sights set beyond South Dakota.

It’s not clear how her record on the virus would play beyond the Republican base. South Dakota recorded the nation’s 10th highest COVID-19 death rate. Although some states with far more aggressive approaches to mitigating the pandemic saw similar outcomes, South Dakota had the worst mortality rate in the Midwest. But that hasn’t stopped Noem from bragging about it.

“When I ran for governor I ran on it being an example to the nation,” she told the crowd Friday. “I had no idea that that was going to happen through a pandemic.”

PrevPreviousHow legalization has increased innovation in the cannabis industry
NextAnalysis: How Afghan war showed limits of US military powerNext