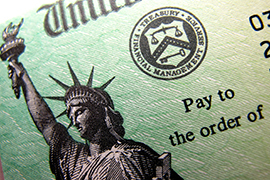 Gilbert resident Lori Ament said she and her husband both work full time to support themselves and their 5-year-old son and are getting by. But not much more.

“We can barely afford child care which my son needed, and some regular doctors’ appointments, which meant medical care copays,” Ament said. “And I didn’t have the time or money to address my own mental health needs, and I have to work full time to even make that work.”

But help is coming Thursday in the form of monthly payments the IRS will begin sending to most American families with children, an advance on their 2021 tax returns that could mean up to $300 a month per child.

“Putting money in the hands of families month to month is helping them then,” Ament said. “You can’t just sit and twiddle your thumbs until February.”

The payments are part of the $1.9 trillion American Rescue Plan that was signed into law in March. That bill increased the previous per-child tax credit, raised the eligibility age from 16 to 17, expanded the payment to cover families that had been excluded because they made too little, and made sure those families got the full benefit – and it’s making the payments in advance, instead of after taxes are filed.

The payments will reach an estimated 39 million households, “covering almost 90% of children in the United States,” the White House said in a June release. In Arizona, an estimated 1.5 million children are expected to benefit from the plan – 692,000 of whom were not previously covered.

“If you look at changes in tax policy in Arizona and the country, this is a really strong policy response to benefit lower-income families and children,” said Andrew Sugrue, assistant director of policy and advocacy for The Arizona Center for Economic Progress.

He said the payments are expected to cut child poverty in half nationally and by about 45% in Arizona, lifting as many 238,000 children in the state above or near the poverty line.

That change acknowledges the fact that “infants and toddlers, and really young children, are more expensive” than older children, said Andrew Lautz, director of federal policy for the National Taxpayers Union. Now, instead of $2,000 a year per kid, families can get $3,600 a year for younger children, $3,000 for older ones.

“The benefit of the child tax care credit, as opposed to other credits and deductions available in the tax code, is that it is a cash benefit,” Lautz said.

“What that means is before the Biden plan passed into law, the child tax care credit was a lump-sum benefit that taxpayers could receive annually when they filed their taxes and this is a cash benefit so they can spend it on whatever childcare expenses they need,” he said.

Another difference, he said, is that unlike the child and dependent care tax credit “where you actually need to demonstrate you have eligible expenses for specific child care costs” like summer camp or day care, this payment is automatic for families that have filed taxes.

“Pretty much the determination if you’re eligible for the child tax credit, is that you have a child” and meet the income thresholds, Lautz said.

For some families, that can mean not having to choose between paying for extracurricular activities for a child or paying out-of-plan health services, Ament said. For others it means being able to pay for diapers, food or day care, or taking a road trip the family could not afford before.

Rebecca Gau, executive director of Stand for Children Arizona, said the monthly payments are “going to help them (families) get back on their feet and start getting back to normal.”

But those payments are only for this tax year. That is why advocates are pushing for the $1.8 trillion American Families Plan, which would extend the child tax credit program through 2025. It would also adjust the payment for inflation and require the Treasury Department to set up a system to distribute the payments every month.

“I expect that (the plan) will be a major debate on Capitol Hill over the next six months, even among Democrats,” he said.

But Ament said one year is not enough for families that “are in a hard enough position where they have to question what they can do for their kid.” Like most advocates, she said that relief is needed, not just now, but for years to come.

“Our families need it. Period. Across the board, regardless of your income,” she said. “The U.S. is behind other countries in supporting families,”