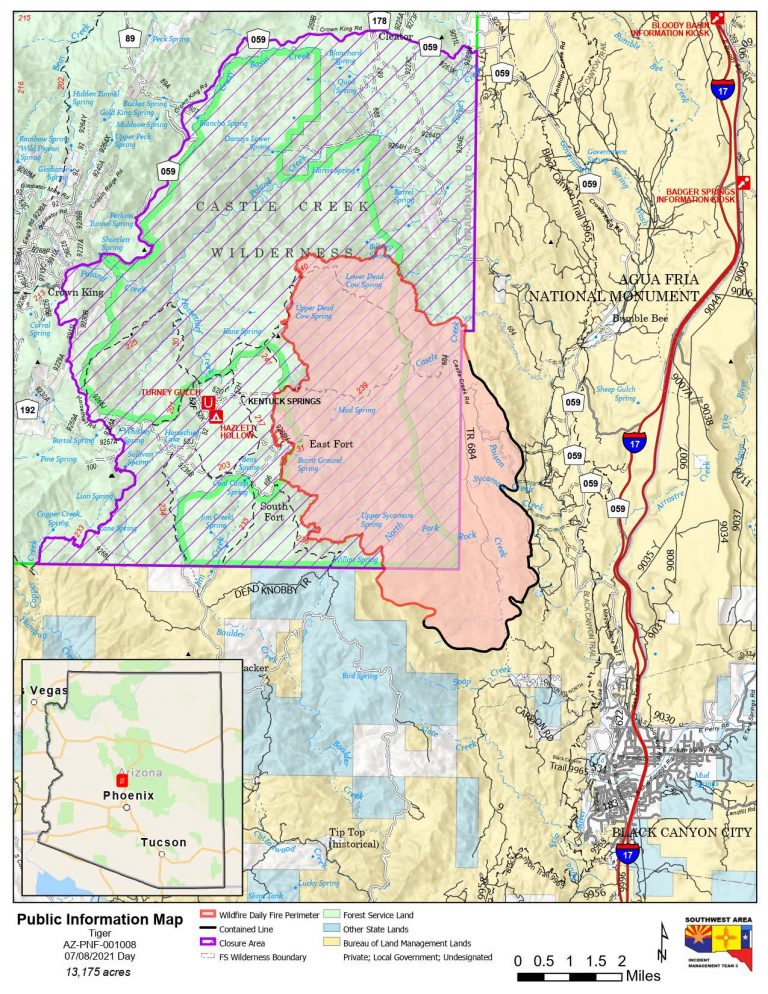 With the community of Crown King in a “Set” status, the town remains closed to the public. Only residents are allowed in and out.

Saturday afternoon a new fire was reported along Interstate 17 near the Bumble Bee exit at Milepost 248. Daisy Mountain Fire Department and initial attack resources from the Tiger Fire responded to quickly halt the fire’s spread at about three acres. Interstate 17 was temporarily closed in both directions but was soon reopened. The Tiger Fire burned actively Saturday, with most columns of smoke coming from the northwestern section of the fire in the Horsethief Basin and Dead Cow Springs area. Firefighters worked on structure protection actions at Crown King, Lorena Gulch, and Horsethief Basin and evaluated conditions and need for a firing operation around Horse Thief lookout. Other crews worked to complete fire lines along Crown King Road between Crown King and Cleator.

Today firefighters remain working on structure protection operations at Crown King. In Horsethief Basin crews are providing point protection tactics as needed to protect structures and other assets, while waiting for an opportunity to fire a remaining contingency line when conditions allow. Other resources are monitoring the eastern fire line while remaining ready to attack new fires in the Team’s initial response area should ignitions result from forecast thunderstorms.

EVACUATIONS:  Crown King and the Lorena Gulch Cabins remain in “SET” and Horsethief Basin is in “GO” status in accordance with Arizona’s Ready-Set-Go Program https://ein.az.gov/ready-set-go

Highlights: Yesterday, precipitation fell over the Middle Fire reducing fire activity in some areas of the fire. Despite receiving a quarter to a half inch of rain, the fire grew over 350 acres to the north through grass and light brush over Long Mesa.

Operations: Firefighters continue to scout for viable roads and access points into the Middle Fire. Rugged terrain and impassable roads are preventing direct access in and out of the fire area. Firefighters are working to protect critical infrastructure in the area, including powerlines managed by the Western Area Power Administration (WAPA). Even though the fire is approaching the powerlines, vegetation treatments implemented by WAPA are expected to reduce fire behavior underneath the lines. Little activity was observed on the western and eastern sides of the fire, with the most intense heat concentrated on the northern end.

Weather: Isolated showers and thunderstorms are expected again today as high pressure keeps an easterly flow over the area. The most favored times for storms to develop will be after 3 p.m. Brief, heavy rain and gusty, erratic winds are possible with any storm. Temperatures will be slightly cooler today but still hot with highs in the low 100s. Light terrain-driven winds in the morning will move out of the west in the afternoon with speeds of 10-15 mph and gusts up to 20 mph. Monsoonal moisture is expected to increase early in the week with scattered, afternoon thunderstorms expected for much of next week. Some storms could produce heavy rain and flash flooding.

A BAER  (Burned Area Emergency Response) team was established to begin a burned area assessment of the Rafael wildfire. BAER assessments are rapid evaluations of the burned area to identify unacceptable risks on National Forest Service (NFS) lands from post-fire threats and assist land managers in preparing the burned area prior to the first damaging weather event. The team’s focus is on the emergency actions necessary to protect life and safety, property and critical natural and cultural resources on NFS lands. The team also shares burned area information from the assessment with other federal, state and local agencies with post-fire responsibilities on state and private lands both within and downstream of burned areas, including USDA Natural Resources Conservation Service (NRCS), National Weather Service (NWS), and US Geological Survey (USGS).

BAER teams consist of scientists and specialists including hydrologists, geologists, soil scientists, engineers, botanists, biologists, archeologists and geographic information specialists. The teams collect data during ground surveys and complete GIS and modelling to evaluate the post-ire risks. The first step in the BAER assessment process is taking satellite imagery and data collected during ground surveys to produce a soil burn severity map. The soil burn severity provides the baseline information to determine changed watershed conditions for assessing potential watershed impacts from wildfires. This information is then compiled and presented to Forest Leadership along with recommended BAER emergency stabilization treatments in a BAER assessment report.

The Rafael Fire BAER team has completed its analysis of the fire’s effect on soils, which shows that 63.1% of the fire burned at low severity, 18.6% of the fire burned in moderate severity, 7.2% of the fire burned at high severity and 10.9% unburned.  Given the location of the fire footprint, final assessments indicate high risk within Sycamore Canyon Wilderness and the downstream drainage to the confluence with the Verde River.  Any potential post fire risk includes hazard trees, stump holes, falling rocks, debris flows and possible flooding with runoff risk to values and property downstream.   The BAER team analysis supported no mulching or seeding in Sycamore Canyon due to the terrain and vegetation type.  Therefore, there will be no additional treatments other than maintaining the closure area, installing post warning signs to inform the public of post wildfire hazards and completing post storm inspection for identified roads and trails.

Everyone near and downstream from the Rafael Fire burned area should remain alert and stay updated on weather conditions that may result in heavy rains over the area. Flash flooding could occur quickly during heavy rain events.

REMINDER:  The Rafael Fire Area Closure is still in effect on the Prescott, Coconino and Kaibab National Forests.  Detailed information and a map are available on Inciweb at Rafael Fire Information – InciWeb the Incident Information System (nwcg.gov)