Conflict of Interest: 1. a situation in which the concerns or aims of two different parties are incompatible. “the conflict of interest between elected officials and corporate lobbyists”
2. a situation in which a person is in a position to derive personal benefit from actions or decisions made in their official capacity.—Oxford Dictionary

Ballots for the Prescott Mayoral and City Council races have been mailed to voters. It’s mind-boggling to consider the amount of money being spent by one candidate. Current Mayor Greg Mengarelli has a newspaper insert almost weekly, political postcards, a large semi-truck billboard, yard signs, prime-time cable news commercials, radio spots, paid pollsters, and videos. And just this past week, negative campaign postcards began arriving in mailboxes, attacking the other candidate for mayor, Phil Goode. At the end of the campaign filing period in June, Prescott citizens should be able to see all of the candidates’ campaign costs. Then they can judge for themselves who is influencing Mengarelli. 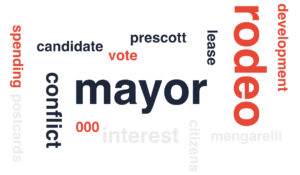 What makes this even more disconcerting is Mengarelli actually made a public statement that he needs a new job in order to support his family. The City attorney informed him of his obvious conflict of interest and that he should recuse from any votes on the matter of his new employer—Prescott Frontier Days—also known as the Rodeo.
Here’s a column asking some of the same questions about Mengarelli’s conflicts:
https://www.dcourier.com/news/2021/jun/19/point-mayor-mengarellis-new-rodeo-job-mengarelli-r/

In the column, Tom Cantlon says, “This new job was not opened for applicants. It was developed by key members of the rodeo board and Mengarelli. A driving force behind Mengarelli’s employment was Rodeo President Chris, who is also the lead person at a local paving company that does tens of millions in contracts with the city. Now, his company has no need to curry favor because the city likes using them when they’re the appropriate bidder, but the mayor working for the head of a major contractor is a nice job and still is a conflict.”

Hiring Mengarelli appears to be a means of keeping the rodeo grounds. Conversely, it appears Mengarelli used his influence to land a job that no one else was even allowed to interview for. Mengarelli has been quoted as saying he “needed a job” in reference to the rodeo position because he was no longer employed as a summer camp director. (As an aside, his wife reportedly has earned about $1 million per year for the past few years selling real estate—often for developers actively seeking approvals for projects from the City Council.)

Appearances are often not deceiving.

Further, the president of the Rodeo was quoted by the Daily Courier that this candidate himself approached the Rodeo about the new business development position, seeking a nice salary, a matching bonus, health insurance benefits for his family, and a truck for personal use. It’s not a coincidence the 25-year lease for the Rodeo entered re-negotiations during Mengarelli’s bid for a job as the business development director. The lease terms will provide many more ways for the Rodeo and Mengarelli to make money. And not much of that money will come back to the City or to us, the taxpayers. As a reminder, the City OWNS the Rodeo grounds and as Prescott citizens, it is OUR asset.

“Both the rodeo and the mayor should release the employment contract or agreement. We still don’t know how much he is being paid,” Howard Mechanic wrote in his guest column. “Does it include any compensation based on the amount of business or donations he brings into PFD? I’m not saying there’s anything wrong with the mayor working for PFD. But we need transparency here. Most everyone’s employment contract can stay private, but this one must be made public.”

Here’s another story on the rodeo lease deal and concerns about the conflict of  interest: https://www.dcourier.com/news/2021/jun/23/proposed-new-rodeo-grounds-lease-would-generate-re/

Two questions occur to many people: Shouldn’t the mayor be promoting City assets as part of his mayoral job anyway? Most importantly, why is the mayor spending well over $100,000 in campaign contributions to keep at $9,000-a-year job? In past elections, those contributions were primarily from developers, such as the owner of AED, which is negotiating for the Granite Dells development.

Finally, even if the mayor recuses himself from council votes, it does not eliminate the conflict of interest. It merely eliminates his one vote. Insider information, influence, and the potential for self-dealing doesn’t go away with recusal. This behavior has been overlooked for far too long. It’s time to vote for and demand elected officials who fulfill their duties with integrity, accountability, and transparency.

The citizens of Prescott deserve no less.

Arizonans for Promoting Intergrity is a nonpartisan 501(c)4.
All Posts »