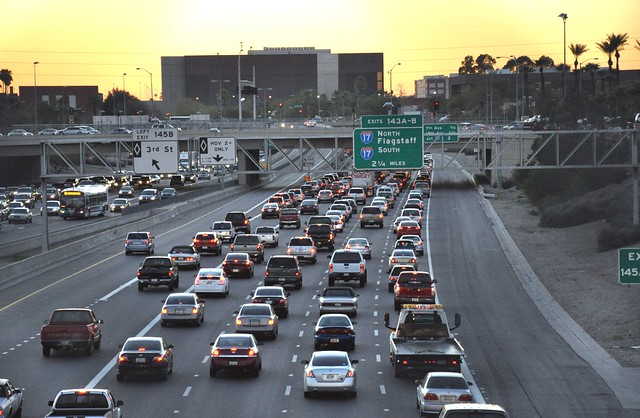 Phoenix area commuters got 36 hours of their lives back last year.

That’s the amount of time Valley residents did not have to spend sitting in traffic, as the COVID-19 pandemic led to sharp drops in commuting and subsequent declines in traffic congestion, according to a new national report.

Cities across Arizona, and across the U.S., saw drops of 50% or more in the number of hours and dollars they wasted sitting in traffic, as well as a reduction in gasoline burned while idling in a traffic jam, said the report last week by the Transportation Institute at Texas A&M University.

“Peak or rush hour traffic aren’t quite as bad as they were,” said Eric Anderson, executive director at Maricopa Association of Governments. “What that means is we have more people not commuting during rush hour as we did prior to the pandemic which reflects the fact that a lot of people are still working from home.”

But experts say drivers should enjoy it while they can, as numbers have already started to creep back up toward previous levels. While it may not immediately reach the levels of 2019, the report said that 2021 “will see faster congestion growth than any time since 1982.”

But in 2020, the time people spent stuck in traffic was at the lowest level since 1988, when a typical U.S. commuter spent an extra 26 hours behind the wheel. Last year, the number fell to 27 hours, a 50% drop from the 54 hours stuck commuting in 2019, according to the 2021 Urban Mobility Report.

Luke Albert, associate research engineer with the Transportation Institute, attributed the drop to the number of people teleworking, which spread the number of cars and trucks on the highway out over the course of the day. Or, as the report put it, while cities were “focused on ‘flattening the curve’ to address the pandemic health emergency, they also flattened the travel-delay curve.”

For example, the report said that commuters in the Phoenix-Mesa region who drove to work between 6 and 10 a.m. and drove home between 3 and 7 p.m. spent 36 fewer hours stuck in traffic in 2020 than they did in 2019, a 59% drop. The numbers were similar in Tucson, where the 21 hours spent stuck in traffic last year was down 58% from the year before.

While smaller cities across the state had shorter commutes, they all saw similar declines in delays from 2019. In Avondale-Goodyear, commuting delays fell from a total of 23 hours to 14 hours last year, while commuters in Flagstaff and Prescott “wasted eight hours sitting in traffic in 2020,” according to the report. Every city in the state saw at least a one-third decline in hours spent in traffic congestions.

It was not just time that was saved. Nationally, the report said commuters burned an extra 3.5 billion gallons of gas in 2019 from traffic that was not moving at “free-flow speeds,” but that number fell to 1.7 billion gallons last year. Congestion-caused greenhouse gas emissions fell from 36 million tons to 18 million tons.

The cost of all that sitting adds up: The report said traffic congestion cost Americans $190 billion of extra fuel and lost time in 2019, compared to $101 billion last year. That’s a drop in per-commuter expenses from $1,170 to $605.

Anderson said he expects “higher telecommuting” that started during the pandemic to continue into the future, as many employers and employees have found they can work remotely. Encouraging people to take up alternative work schedules by working remotely – partially or fully – would “take vehicles off the system and help our (Arizona’s) congestion levels,” he said.

Additionally, many people commute downtown from the West Valley for work every day. Creating more job opportunities in the West Valley would “reduce long-distance commuting patterns and take pressure off the system,” Anderson said. That is one way the state can prepare for the “return of congestion problems” predicted in the report.

But while experts see traffic congestion returning, Albert said it is not likely to reach pre-pandemic levels – right away.

“We definitely have noticed and expect increases in 2021,” Albert said. But “we don’t expect it to be all the way back to 2019” because it’s unclear how many people will continue to work remotely, he said.