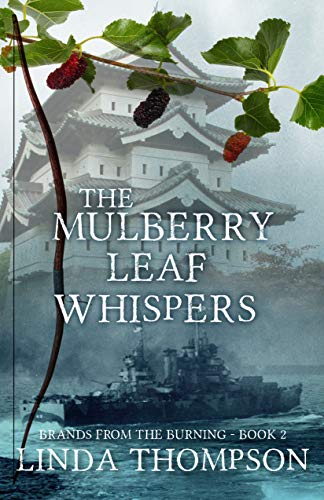 Linda’s research was aided by her husband, a third-generation airline pilot and an American Airlines captain. A longtime Arizona resident, Linda has recently moved from the heat of the Phoenix suburbs to the thriving artistic scene of the Prescott area.

Linda’s books have received commendations from several influential authors, including Jerry B. Jenkins, author of
the Left Behind series.

“Linda Thompson attacks the publishing world like a Mitsubishi Zero swooping from the Japanese sky. The Plum Blooms in Winter proves a taut, crisp, debut achievement that colorfully evokes the Pacific theater of WWII. Start this one
forewarned: it’s a stay-up-all-night read.”—Jerry B. Jenkins, 21-Time New York Times bestselling author(Left Behind,
et al).

The Mulberry Leaf Whispers is available through Amazon.com and for order through your local bookstore.

Linda Thompson stepped back from a corporate career that spanned continents to write what she loves–stories of
unstoppable faith. Her debut novel, The Plum Blooms in Winter, is an American Christian Fiction Writers’ Genesis
award winner and an ECPA Christy Awards finalist. Linda writes from the sun-drenched Arizona mountains, where
she lives with her husband, a third-generation airline pilot who doubles as her Chief Military Research Officer, one
mostly-grown-up kid, and a small platoon of housecats. You can learn more about Linda at her website .