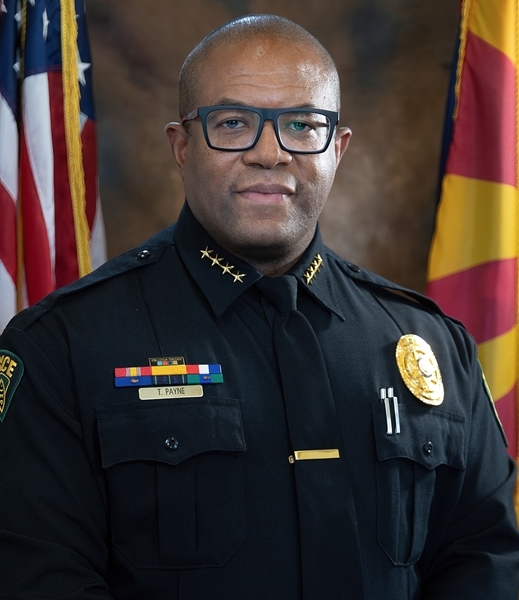 The job that Tyran “Ty” Payne has been dreaming about since childhood and striving for since he joined the U.S. Army at age 18 is now his.

Payne is Yavapai College’s new police chief. He succeeds Jerald Monahan, who has turned in his badge after a 42-year law enforcement career to take the reins of the college’s Administration of Justice Program.

Payne, whose command was effective June 26, won the YCPD’s top leadership post after serving with the department for six years, rising in the ranks from officer, sergeant and lieutenant, and earning an associate’s degree in criminal justice at YC. He was selected following a nationwide search and he is grateful for the opportunity.

“To reach this level is a dream come true. This is the next chapter of my life and I really wanted it,” Payne said, sharing that the seeds of his policing career were planted at age 8 when he accompanied his grandmother to her job at a women’s prison in Delaware. “My desire goes back that far to practice law enforcement,” he said, explaining that he chose the field both to keep the public safe and help steer people clear of the criminal justice system. 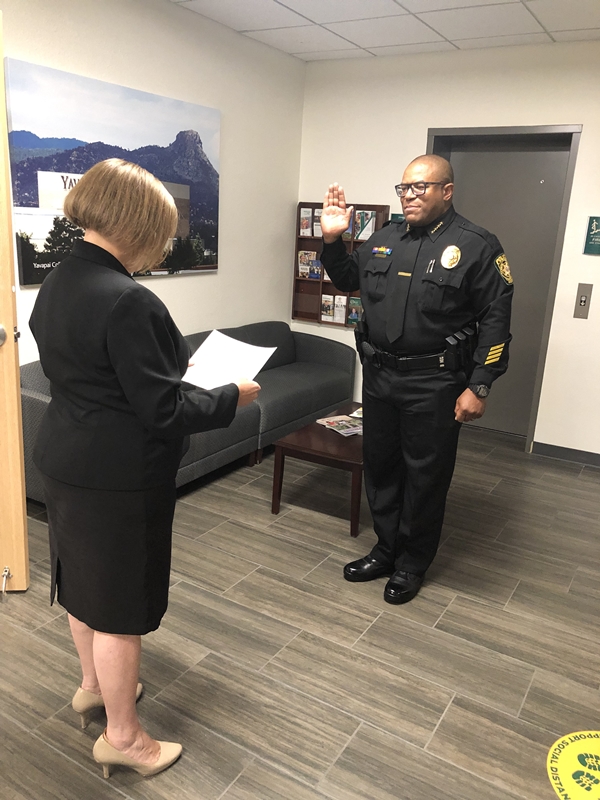 As a black American veteran of the U.S. Army Police Corps, a mental health first aid educator, a founding board member of the Yavapai County Justice and Mental Health Coalition and a graduate of multiple FBI trainings and leadership institutes, Payne is uniquely equipped to protect, serve and problem-solve for both sides of the law.

“The challenges that law enforcement are currently facing are what drive me to continue on in this career field. I’m no stranger to hard work and heavy lifting. I’m all for looking forward and looking to the future of law enforcement. I think I’m set up in the perfect place to be something new and different in this position.”

Collaborating with the YC Criminal Justice Program under Monahan and the Northern Arizona Regional Training Academy, a YC-hosted police academy, Payne envisions the YCPD being a catalyst for change in policing and the justice system.

“We have a rare opportunity here. We can directly affect locally our new police officers who are going out there and hitting the street… We’re going to do big things, starting locally, maybe even nationally as we move forward.”

Payne joined the YCPD after 10 years of military service and working for both the Prescott Valley and Chino Valley police departments. He said he has immensely enjoyed his college policing experience, especially his positive interactions with students and his work with the YC Respect Campaign and the President’s Equity Task Force to create a safe, inclusive college environment in which “everyone has a voice. I have a vested interest in this institution. I can think of no better place to continue to serve in law enforcement at this point in my career.”

YC Vice President of Finance and Administrative Services, Dr. Clint Ewell, said he is pleased to have filled the YC police chief’s vacancy with someone who brings 30 years of law enforcement experience and a host of community relationships to the job. “These relationships and experiences will allow him to hit the ground running and keep the positive momentum of the YCPD team.”

Ewell added that Payne played a critical role in helping YC become one of the first community colleges in the nation to become accredited by the International Association of Campus Law Enforcement Administrators. “I am excited to have found such a qualified candidate who knows about best practices in policing, as well as how college law enforcement differs from municipal law enforcement, with more time to focus on deterrence…” he said.

Payne balances his YCPD and volunteer responsibilities with raising a family of five with his wife, Gwen. The couple have four sons, Tyran, 23, a semi-pro soccer player; Alexander, 22, who is currently serving with the U.S. Army Police Corps; Wade, 19, a YC student; and  Layton, 16, a Chino Valley High School student. The couple adopted daughter, Layla, 3, two years ago.

Payne is pursuing a bachelor’s degree in criminal justice from Northern Arizona University. His favorite pastimes are biking and hiking.