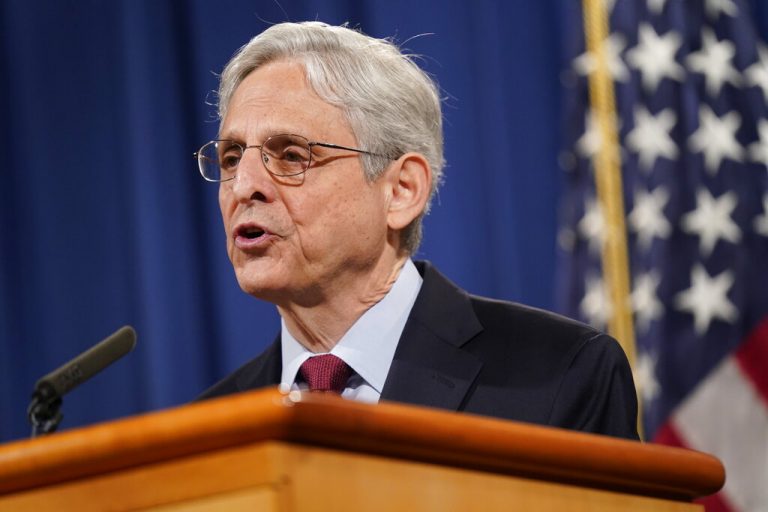 The Justice Department is halting federal executions after a historic use of capital punishment by the Trump administration, which carried out 13 executions in six months.

Attorney General Merrick Garland made the announcement Thursday night, saying he was imposing a moratorium on federal executions while the Justice Department conducts a review of its policies and procedures. He gave no timetable.

“The Department of Justice must ensure that everyone in the federal criminal justice system is not only afforded the rights guaranteed by the Constitution and laws of the United States, but is also treated fairly and humanely,” Garland said. “That obligation has special force in capital cases.”

Garland said the department would review the protocols put in place by former Attorney General William Barr. A federal lawsuit has been filed over the protocols — including the risk of pain and suffering associated with the use of pentobarbital, the drug used for lethal injection.

The decision puts executions on hold for now, but it doesn’t end their use and keeps the door open for another administration to simply restart them. It also doesn’t stop federal prosecutors from seeking the death penalty; the Biden administration recently asked the U.S. Supreme Court to reinstate the Boston Marathon bomber’s original death sentence.

President Joe Biden has said he opposes the death penalty and his team vowed that he would take action to stop its use while in office. But the issue is uncomfortable one for Biden. As a then-proponent of the death penalty, Biden helped craft 1994 laws that added 60 federal crimes for which someone could be put to death, including several that did not cause death. He later conceded the laws disproportionately impacted black people. Black people are also overrepresented on death rows across the United States.

Anti-death penalty advocates had hoped for a more definitive answer from the Biden administration. Sup​port for the death penalty among Americans is at near-historic lows after peaking in the mid-1990s and steadily declining since, with most recent polls indicating support now hovers around 55%, according to the nonpartisan Death Penalty Information Center in Washington, D.C.

Ruth Friedman, Director of the Federal Capital Habeas Project, which represented some of the prisoners on death row, said Garland’s action was a step in the right direction, but it’s not enough. She called on Biden to commute the sentences.

“We know the federal death penalty system is marred by racial bias, arbitrariness, over-reaching, and grievous mistakes by defense lawyers and prosecutors that make it broken beyond repair,” she said. There are 46 people still on federal death row.

White House spokesman Andrew Bates said Biden was “pleased the Attorney General is taking these steps” and emphasized that the president has “significant concerns about the death penalty and how it is implemented.”

The review is strikingly similar to one to one imposed during the Obama administration. In 2014, following a botched state execution in Oklahoma, President Barack Obama directed the Justice Department to conduct a broad review of capital punishment and issues surrounding lethal injection drugs.

Barr announced the restarting of executions in 2019, saying the Obama-era review had been completed and clearing the way for executions to resume. He approved the new procedure for lethal injections that replaced the three-drug combination previously used in federal executions with one drug, pentobarbital. This is similar to the procedure used in several states, including Georgia, Missouri and Texas, but not all.

Donald Trump’s Justice Department resumed federal executions in July, following a 17-year hiatus. No president in more than 120 years had overseen as many federal executions. The last inmate to be executed, Dustin Higgs, was put to death at the federal prison complex in Terre Haute, Indiana, less than a week before Trump left office.

They were carried out during a worsening coronavirus pandemic. Toward the end of the string of executions, 70% of death row inmates were sick with COVID-19, guards were ill and traveling prisons staff on the execution team had the virus. It’s impossible to know precisely who introduced the infections and how they started to spread, in part because prisons officials didn’t consistently do contact tracing and haven’t been fully transparent about the number of cases. But an Associated Press analysis found the executions were likely a superspreader event.

There were major discrepancies in the way executioners who put the 13 inmates to death described the process of dying by lethal injection. They likened the process in official court papers to falling asleep and called gurneys “beds” and final breaths “snores.”

But those tranquil accounts are at odds with reports by The Associated Press and other media witnesses of how prisoners’ stomachs rolled, shook and shuddered as the pentobarbital took effect inside the U.S. penitentiary death chamber in Terre Haute. The AP witnessed every execution.

Secrecy surrounded all aspects of the executions. Courts relied on those carrying them out to volunteer information about glitches. None of the executioners mentioned any.

Lawyers argued that one of the men put to death last year, Wesley Purkey, suffered “extreme pain” as he received a dose of pentobarbital. The court papers were filed by another inmate, Keith Nelson, in an effort to halt or delay his execution. But it went forward.

The federal Bureau of Prisons has declined to explain how it obtained pentobarbital for the lethal injections under Trump. But states have resorted to other means as the drugs used in lethal injections have become increasingly hard to procure. Pharmaceutical companies in the 2000s began banning the use of their products for executions, saying they were meant to save lives, not take them.