Heat stroke vs. heat exhaustion: How to know which is which 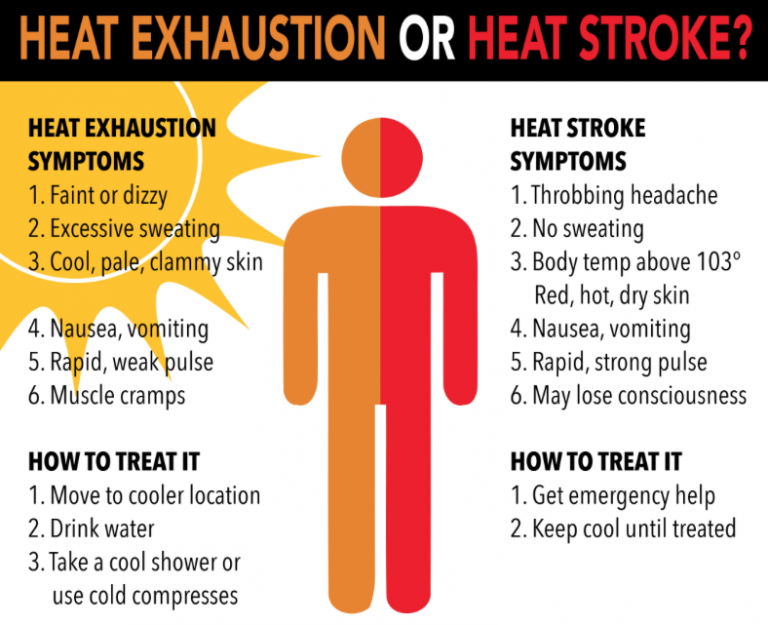 Nearly 3,000 people go to the emergency room every year for heat-related illnesses, such as heat stroke and heat exhaustion, the Arizona Department of Health Services says.

“I think people are not aware of just how hot it is and how fast they can become dehydrated,” said Capt. Mike Norling of Scottsdale Fire. “Most of us here, in the Phoenix area in particular, we’re dehydrated when we start off the day anyway.”

Knowing how to spot these illnesses is key to preventing serious injury or even death. Heat exhaustion is a milder illness that can develop after several days of exposure to high temperatures. Symptoms include feeling faint or dizzy, excessive sweating, cool, pale skin, nausea, a rapid, weak pulse and muscle cramps.

If heat exhaustion is untreated, it can progress to heat stroke, which is more severe and happens when your body’s temperature rises rapidly, your sweating mechanism fails and you can’t cool yourself down. Symptoms include a throbbing headache, no sweating, a body temperature above 103 degrees, red, hot, dry skin, a rapid, strong pulse and even a loss of consciousness.

“As soon as you start feeling any tiredness, weakness, headaches – those are all signs you need to get yourself inside and get yourself cooled off and start rehydrating,” Norling said.

To prevent heat-related illnesses, the state health department recommends drinking at least 1 liter of water per hour while outside, wearing lightweight and light-colored clothing, applying sunscreen and wearing a hat or using an umbrella to fend off the rays.

Summer began less than two weeks ago, and Arizonans already have weathered temperatures well above 110 degrees, which resulted in a weeklong excessive heat warning and more than 50 suspected heat-related deaths in Maricopa County alone.

According to data released by the county’s department of public health, 53 deaths occurred during the week beginning June 12, aligning with a heat wave that pushed temperatures up to 118 degrees, the Associated Press reported. Those 53 are in addition to 20 suspected heat deaths from earlier this year, bringing a total of 73 under investigation so far in 2021.

As of June 19, three additional deaths have been confirmed as heat-related. Last year, health officials said, Maricopa County set a record for the most such deaths in a single year – 323.