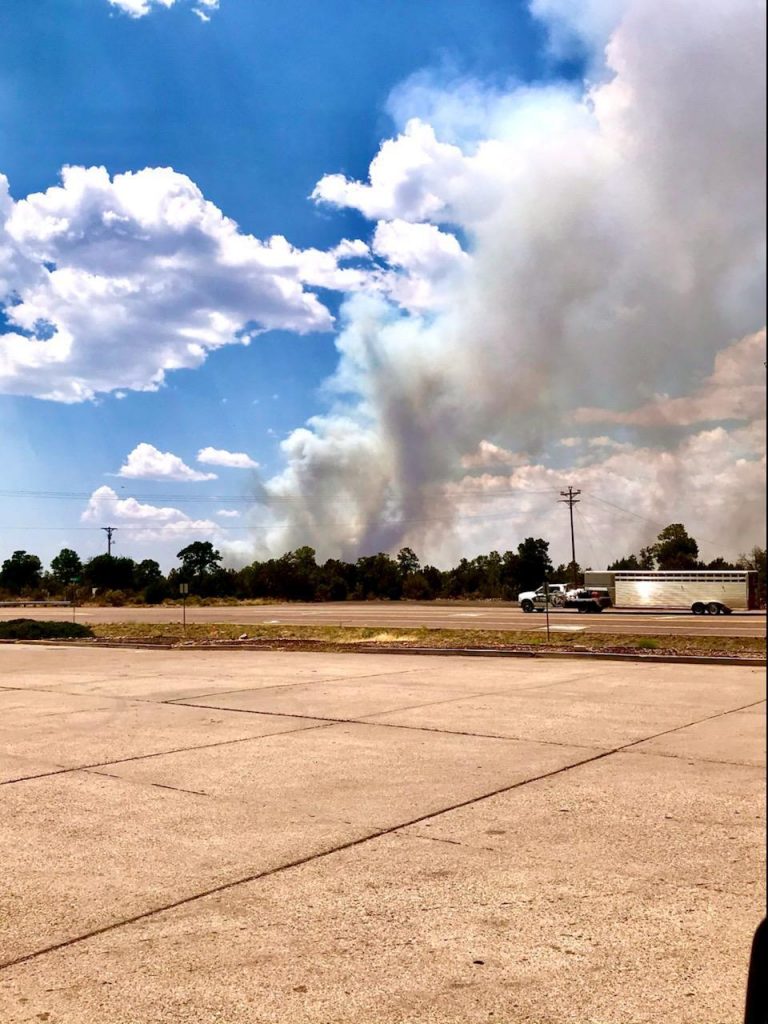 The five fires being managed by the Arizona Central West Zone Type 3 Incident Management team are the following from north to south: Rock Butte Fires:

Location: North of Paulden, AZ and west of HWY 89

Recent moisture has aided the Rock Butte firefighters in gaining ground in containment of the 5 fires.  The Limestone, Red Hat and Silent fires are 100% contained.  Crews were able to patrol and mop-up as needed the entire perimeters of both the Spring and Rock Butte fires which are more than 50% contained.  With unburned fuels in the interior of the Spring Fire, smoke will be visible as these fuels burn.  Firefighters will continue to patrol and monitor all fires.

Taking advantage of favorable weather conditions, today crews continued where they left off yesterday afternoon and began a firing operation at approximately 9 a.m. along road systems on west side of Sycamore Canyon on the Coconino National Forest.  On the Kaibab National Forest, crews continued to connect forest roads from Pine Flat to Sycamore Point to be used as holding lines in preparation for burnout operations.  Burning operations are expected to continue for the next few days as long as weather conditions allow. On the south side near Mooney Canyon, firefighters will continue to monitor the retardant line and scout and identify control lines in preparation for future suppression operations. Smoke is expected to be more noticeable the next few days due to the hotter drier weather that will increase fire activity in Sycamore Canyon combined with smoke from burnout operations. Smoke forecasts are available at Wildfire Smoke Forecast | ADEQ Arizona Department of Environmental Quality (azdeq.gov) .

Evacuation status as of 6 a.m. June 25 (Notifications are in place until status is rescinded or changed by each respective County Sheriff’s Office):

“GO” in Coconino County, areas around Sycamore Canyon and South of Forest Service Road 535 off FS 231 (Sycamore Canyon) and Garland Prairie South. In Yavapai County, some rural ranches in the area of North FSR 525 and Bill Grey Road, West of Sedona (Loy Ranch).  A shelter for evacuees is set up at Sinagua Middle School at 3950 E. Butler in Flagstaff.

“READY” -– in Coconino County, all areas south of 1-40, west of I-17 including the following neighborhoods:

Notifications can change rapidly. Residents in areas affected by the fire should remain vigilant and be prepared to evacuate. Evacuation notifications are issued when danger is imminent and life threatening.

There will be a community meeting tomorrow, Saturday, June 26, 2021, 5:30 pm, at the Expedition Church, 301 S. Colcord Rd, Payson Arizona. The meeting is open to the public and live streamed on the Incident Facebook Page

Yesterday’s rainfall allowed for today’s change in suppression tactics and has provided fire fighters opportunities to go direct on the fire edge along most of the fire perimeter. By going direct, firefighters are able to check the progression of the fire towards the communities of Strawberry and Pine on the east side and Camp Verde on the west. Fire managers and crews are working diligently to increase containment along the east fire perimeter which will help lower the evacuation level.

On the west side, fire activity was minimal today and remains approximately five miles from Camp Verde. Firefighters continue improving primary and secondary lines constructed to protect Verde Lakes and Beasley Flats. On the east side, crews are extinguishing and mopping up any remaining heat around the burnout operation that was initiated three days ago. Firefighters have constructed and improved lines to the West of Strawberry and Pine, including on Deadman Mesa, to stop forward progression of the fire towards those communities. Fire crews continue to assess structures and enhance defensible space, as the fire remains approximately two miles from Strawberry.

Overview: Imagery from an overnight IR (infrared) flight showed widespread heat remaining in both fires. Today’s updated acreage totals are based on this IR imagery.

On Thursday, cloudy skies and light rain continued to temporarily moderate fire activity on the Wyrick and West Chev fires. This allowed firefighters to directly attack the edges of the Wyrick Fire. They constructed and improved a significant amount of additional fireline, which is reflected in increased containment percentage on both fires.

A warming and drying trend is developing over the area. Increased fire activity is expected through this weekend. Helicopters and air tankers are available to assist ground personnel if either fire shows significantly higher activity.

West Chev: On Thursday, firefighters were able to begin constructing fireline. Today, personnel plan to burn remaining fuel between the fire’s edge and Forest Road 169B that goes to Chevelon Lake to better secure the fire. They also plan to prepare FR 180 for firing. Crews and engines will patrol and mop up hot spots that are close to fire’s edge.

Firefighters continue to make progress in their work to contain the Walnut Fire that has been active over the past week. A reconnaissance flight, which entails aircraft equipped with infrared (IR) sensing technology can map wildfires, providing firefighters with an accurate assessment of the fire perimeter.

Last night’s IR flight data collected more precise acreage information and determined the fire to be 9,717 acres. Resources on the fire consist of 202 fire personnel. Multiple lingering fires inside the perimeter continue to burn. As fuels dry out due to warmer temperatures and increasing winds, smoke from these fires may be visible from I-10.

Today, firefighters continue securing established fire line and will monitor the perimeter for unburned pockets of interior fuel. Structure protection crews will be scouting areas and pre-positioned to respond to any potential threats. As fire activity has dramatically decreased, some crews and equipment will begin to be released from the fire to support other fires in the region.