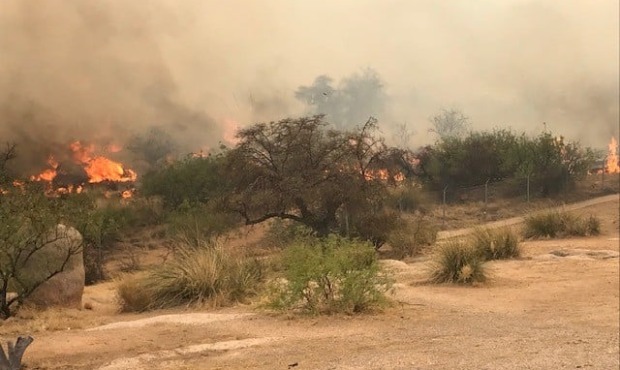 The six fires being managed by the Arizona Central West Zone Type 3 Incident Management team are the following [from north to south – all acreages are approximate and current as of 6/22].

Location: North of Paulden, AZ and west of HWY 89.

On the Rock Butte Fire, considerable progress was made on all five of the fires such that fire managers felt comfortable removing the “Ready” status for the residents of Paulden. Fire managers will continue to monitor how the change in the weather may affect these fires.

Location: 4 miles North of Perkinsville, AZ and near Sycamore Canyon

Fire personnel were engaged in a variety of ways on the Rafael Fire yesterday. Use of aircraft was effective in slowing the fire progression on the east and south side of the fire.  Both mechanical and hand prepping of control lines were strategically located to protect values at risk including fire lookouts, cultural resources, private property, and infrastructure. The fire crossed Tule Canyon up to Sycamore Point. It also moved to the east crossing Sycamore Canyon up on to Casner Mountain. The fire is moving north/northeast towards higher elevations and timber fuel types. Crews will continue to work on developing containment strategies and prepping potential control lines along roads and other features.  A change in the weather brings cooler overnight temperatures, increased relative humidity, and up to a 60% chance of precipitation. Along with these benefits, the thunderstorms also bring the possibility of more lightning and gusty winds.

Yesterday, crews worked diligently to contain the Walnut Fire as it made its way down the hill through the drought-stressed vegetation, rocks, and logs. Due to the fire’s southern movement, a GO was issued for residents in the Dragoon-area. As firefighters pushed to create containment lines along a portion of the I-10, the interstate had to be temporarily shut down as heavy smoke created unsafe conditions not only for firefighters, but drivers as well. Strong winds also caused the Walnut Fire to cross over to the south side of I-10. Crews worked through the night to secure the area and as a result both lanes of the interstate were reopened by 2:00 am. Multiple structure protection crews worked hard to create protection lines around houses and the Amerind Museum. Throughout the day, air support made multiple water and retardant drops on the fire, making great progress towards the goal of full fire suppression.

Today, more fire crews and resources are expected to arrive. Firefighters will continue to directly attack the fire, focusing on structure protection, strengthening and securing the line along the interstate, and scouting and developing backup plans. Aviation support will continue early this morning, aiding firefighters with water drops. Spotty showers are predicted for the area starting in the afternoon however, erratic winds are expected to follow.

Evacuations: As of this morning, the GO Evacuation remains in place for Dragoon Road, East Dragoon Road, North Amerind Road, and Triangle T Road. A Red Cross shelter has been set up for Walnut Fire evacuees at Benson High School in the gymnasium. The gym can be accessed off South Central Avenue, one block west of Patagonia. Shelter for large and small animals is available at the J7 Equestrian Center, located at 3036 W. Williams Road in Benson. Call Samantha at (520) 591-9950 for more information. Additional housing for large animals is available in St. David. Call Ginger at (520) 271-8206 for more information.

Smoke: As temperatures rise and wind picks up, smoke may be visible from I-10 and throughout the local area. Drivers are urged to use caution along I-10 between Benson and Willcox as afternoon smoke may settle on the highway reducing visibility.

Patience is requested during evacuations as the Backbone Fire remains a threat. Moderate rains were experienced around the fire area providing opportunities for the firefighters to limit the rate of spread.  The Backbone Fire is 1 percent contained and continues to be one of many wildfires burning in hot, dry conditions across Arizona.

Fire activity in the southwest corner is minimal, although the fire has moved it remains on the east side of the Verde River. Primary and secondary control lines have been completed on Wingfield Mesa and fire crews continue to improve those lines.  Additional contingency lines have also been completed near Beasley Flat and Verde Lakes.  Firefighters continue to prepare State Route 260 and State Route 87 for future firing operations.  In the areas where burning operations occurred, crews are monitoring for hotspots and continue to mop up near containment lines.

Public Land Closures:  An emergency area fire closure has been issued to protect public health and safety from fire activities.  All Tonto, Coconino, and Prescott National Forest lands, roads, and trails in the area of the Backbone Fire are closed. Full details of area and road closures are available on the Backbone Fire Inciweb page at:  https://inciweb.nwcg.gov/incident/7545/

Evacuations: Evacuation orders were issued for the communities of Pine and Strawberry. Residents and visitors should contact their county or visit https://ein.az.gov/ready-set-go for information regarding evacuation status.

Fire Danger Remains Extreme.  National Forest closures are in affect on the Kaibab and Coconino as of June 23, Apache-Sitgreaves June 24 and Prescott June 25. Tonto National Forest will implement a Forest Closure on June 25. Check for fire restrictions or information on fire activity around Arizona at: https://wildlandfire.az.gov/

The Snake Fire, located about seven miles west of Clints Well on the northern edge of West Clear Creek is currently 71 acres. Firefighters have built hand and dozer line around a portion of the fire, and continue to look for opportunities to expand that line. The Snake Fire was reported at 2:36 p.m. on Monday (June 21, 2021) by the Apache Maid Lookout, and the cause of the wildfire is unknown.

Overnight, favorable weather conditions resulted in minimal fire growth, allowing for the conclusion of night operations. The southeast corner of the fire on Mescal Mountain continued to experience scattered heat pockets. Firefighters continued to monitor the fire and potential threats to communities and infrastructure.

Firefighters will continue to patrol and monitor the fire for flare-ups, hot spots in the Ice House Canyon area and along the southeast section of the fire adjacent to Mescal Mountain, and mop up along the U.S. Route 60 corridor and State Route 77. Aircraft will patrol the fire in support of suppression efforts and conduct infrared mapping flights. The incident management team will host a community meeting on our Facebook page tonight at 6 p.m.

With overcast skies and slightly cooler temperatures, firefighters patrolled and mopped up fire lines around the perimeter of the fire. When isolated pockets of heat were encountered along the western perimeter, helicopter water drops were used to cool and contain them. The other segments of the fire remained quiet through last night with firefighters continuing to patrol and mop up hot spots.

Crews will continue to patrol, mop up, and monitor fire lines. The night shift will cease, and those resources will be integrated into the day shift. Firefighters will begin to focus on suppression repair tomorrow, composed of repairing bulldozer lines, chipping brush cut from fire lines, and smoothing areas of ground disturbance to minimize erosion.

Currently assigned resources include 4 hand crews, 4 helicopters, 20 engines, 10 water tenders, and 2 dozers. Resources are beginning to be released from the Pinnacle Fire as operational needs are reduced. These resources will rest, resupply, and prepare for the next assignment.

Cause of Both Fires: Lightning

Recent record breaking heat, combined with extreme drought conditions have set the stage for extreme fire behavior. Crews are working day and night to keep the Wyrick Fire from moving any closer to Heber-Overgaard. More favorable weather conditions will allow firefighters the opportunity to make some progress before sunny skies return.

Fire Update: On Tuesday, air tankers dropped retardant while helicopters dropped water on the southeast corner of the Wyrick Fire to keep the fire from moving to the south. Firefighters also worked on the south side of the Wyrick Fire between the 504 and 95 roads to construct a fire line. The Wyrick fire is currently holding on the west side of Black Canyon. Firefighters were in place to begin assessing how to safely construct fire lines to contain the West Chev Fire. Clouds helped to slow growth on both the Wyrick and West Chev fires yesterday afternoon.