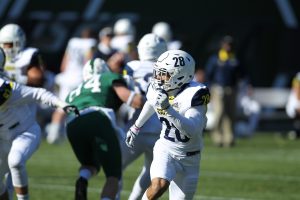 The Supreme Court ruled Monday that the NCAA’s attempts to limit education-related benefits for athletes violate antitrust law in a unanimous decision that could pave the way for further rulings on athlete compensation.

The ruling means schools can go beyond tuition scholarships to cover cost of attendance, and pay for personal laptops, tutors and even musical instruments or art supplies for classes. Schools will also be able to pay for athletes to study abroad, fund internships after they graduate and pay for postgraduate education.

“’I’m all for schools continuing to take care of the athletes that have given them their blood, sweat and tears,” said Rice assistant coach Derek Glasser, a former Arizona State basketball player. “Kids sacrifice a lot to provide fans and the other students with entertainment.”

The case originated in 2014 when West Virginia football player Shawne Alston and University of California basketball player Justine Hartman sued the NCAA for working to keep their compensation unfairly low. The NCAA argued that athletes being seen as amateurs because they are uncompensated is one of the reasons people watch college athletics, making it an essential part of its business deserving an exemption from antitrust law.

Antitrust laws help prevent monopolies by promoting competition. In this case, schools compete with each other to attract athletes by offering them better forms of compensation in relation to academics.

Preston Ryan, who went to McClintock High School in Tempe and played baseball for the University of New Mexico, said the Supreme Court ruling will help athletes be successful after they graduate.

At UNM, Ryan said he felt obligated to attend activities like study hall and morning workouts that were technically optional so they didn’t count against athlete weekly hours limit. Because of those activities, plus his hours in practice and playing games, he said he wasn’t able to devote time to networking or professional development the way peers outside of athletics could.

He compared his experience as an athlete to the experience his friends in fraternities had. Those friends left with connections to alumni and extensive resumes from internships they got through those connections. Ryan, meanwhile, worried even if he did have time for networking that it would affect his eligibility.

“God forbid the guy buys you a drink, buys you an appetizer and that’s going to come back to losing a year of eligibility just because you’re out networking and meeting new people and trying to develop yourself,” he said.

Because he always knew he wasn’t going to be a professional athlete, which is the case for all but the 2% of NCAA athletes who move on to professional sports leagues, he wished he could have spent more time planning for his future. With this ruling, Ryan believes college athletes will be better prepared for that future because their schools can fund internships as well as provide other academic benefits.

Casey Benson, who went to Corona del Sol High School in Tempe before playing three years at the University of Oregon and one at Grand Canyon University, agreed. Though Benson plays professional basketball in Slovenia now, he still thinks it would have made a big difference for him if his college had placed him in an internship or funded one for him because it was hard to focus on basketball, schoolwork and professional development all at once.

Glasser said he has seen athletes paralyzed with fear when planning for their future. They devote so much time to athletics that they don’t even know what options or interests they have in terms of a career.

“That’s good that the schools are going to start putting more and more resources into that because there’s so many athletes in college that once they graduate and they don’t go pro, it’s like, what do they do? They don’t even know,” he said.

Rice has someone devoted to athletic student development and helps them prepare for job fairs as well as build connections with alumni. Glasser said he could see more schools creating a similar position to dispense funds to students in relation to this ruling.

In addition to post-graduation career benefits, Ryan thinks this ruling could help students whose families aren’t as well-off financially because schools can give tools like laptops and textbooks that are needed for academic success.

While Benson was at Oregon, the school loaned basketball players laptops which they could buy upon the completion of their time in the program. He said he was grateful for that benefit because it helped him with his school work.

GCU didn’t offer the laptop benefit but Benson wasn’t dissuaded from transferring because of that. Although some schools have more resources than others to give extra academic benefits, Benson said, it might not make as big an impact as it seems on the surface.

“A minute percentage might be making a decision based on getting a laptop or getting academic benefits, but I think most kids are probably looking for the athletic piece,” Benson said.

Dave Morris, the founder of College Athletic Advisor, thinks Benson is correct that these academic benefits won’t make programs of similar athletic caliber any more or less competitive when it comes to recruiting.

“Is a kid going to pick Georgia over Alabama because Alabama offered a nicer computer? I don’t really see that as a huge issue,” said Morris, who works with athletes to help them in their recruitment and helps universities ensure their athletes stay in compliance.

Glasser said the difference might come between schools of different resource levels. Larger schools will be able to provide heightened benefits while smaller schools won’t.

Glasser used the example of a university offering to help pay for an athlete’s medical school expenses after graduation. Because of this ruling, some schools might be able to give that benefit while others can’t financially. It’s not just laptops and networking but the potential to fund postgraduate programs that Glasser said might make a difference in recruitment, though he cautioned that it’s too soon to say what the impact will be since he thinks they will come on a school-to-school, or even person-to-person, basis.

Teresa Valerio Parrot, who works with clients across higher education in her role as Principal at TVP Communications, believes this ruling goes beyond questions about recruiting and compensation.

“It refocuses higher education on the support and educational opportunities for student athletes,” she said. “It encourages institutions to live the rhetoric that they use when they describe the academic benefits of intercollegiate athletics.”

Like Benson and Ryan said, it can be difficult to balance the demands of being an athlete with the knowledge that, for most, the reason people participate in college athletics is to earn a college degree. To Valerio Parrot, this ruling indicates that universities should be prioritizing student-athletes as students and people off the court, not just as athletes.

“For many of our student-athletes, they don’t get that co-curricular experience because, in essence, they’re spending all of the time that they could devote to things like internships and study abroad to perfecting their sport,” she said.

Valerio Parrot emphasized that this ruling might encourage schools to look into recruiting students with more eligibility for graduate degrees to play sports. She also believes it will lead to schools supporting athletes after their time at the school is over in a similar way that athletes support their schools and communities after they’re done playing through donations and school spirit.

“We’re seeing this amazing moment in history for college athletics where so many different elements are being either redefined or clarified moving forward,” she said.

Others see the ruling opening the door to other challenges the NCAA faces, including athlete compensation that might be clarified moving forward.

Morris said that Kavanaugh’s concurring opinion, which is when a Justice agrees with the court but for a different reason, essentially asked for further lawsuits to make a bigger ruling about permitting student compensation. To Morris, that’s the bigger impact of this ruling.

“I think the NCAA would be wise to work to preempt that and work with Congress to develop some kind of a legal justification for having sports as a part of higher ed or they’re going to have to change their model,” he said. “Ultimately you can’t keep collecting a billion dollars a year while the people who are doing the sweating aren’t getting paid right.”

He said if the NCAA wants to continue to receive some exemptions to antitrust laws when it comes to paying athletes, they need to do more to show the value of the education they are providing to students rather than relying on arguments about amateurism.

Benson said he found value in not being treated the way he is professionally while he was in college because the environment was more supportive. For that reason, he thinks if college athletes are allowed to make money off their name, image and likeness in the future, there should be an overarching structure that regulates those transactions and supports the athletes.

He thinks athletes should get a cut of the revenue they generate but wants to be sure it’s done right.

“If I were back in college, it would be pretty cool to be able to make money off of your name and your brand and stuff,” Benson said. “But also it just turns you into a professional in college.”

Despite the uncertainty of what this means for college athletics, Glasser believes it is positive.

PrevPreviousOpinion: Nostalgia Through the Eyes of Many White Men
NextAs urban life resumes, can US cities avert gridlock?Next