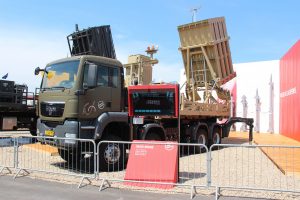 Photo: Each Iron Dome battery can defend up to nearly 60 square miles. (Photo courtesy of Raytheon)

Amid recent violence in the Middle East, Arizona Gov. Doug Ducey tweeted “Arizona stands with Israel,” joining Republican leaders across the country in a show of political support.

It also provoked outrage among those who support Palestinians, with one activist calling Ducey’s position a “violation of human rights.”

Despite the polarized viewpoints, Arizona’s aerospace and defense industry not only “stands with” Israel, but technology developed here stands watch over the country: Israel’s Iron Dome defense system was created here. In partnership with Rafael Advanced Defense Systems in Israel, Raytheon Missiles & Defense in Tucson produced the anti-missile defense system credited with blocking thousands of missiles fired by Hamas and other groups since it was first deployed in 2011.

Raytheon employs 15,000 Arizonans, according to its spokesperson, and Israeli partner Rafael formed a joint venture last year to build a version of the Iron Dome for use in the United States.

Leib Bolel, president and CEO of Arizona Israel Technology Alliance, said that when the U.S. provides military aid to Israel, it’s primarily in the form of government contracts.

Raytheon and Rafael “work very closely with the Israeli government to supply them with a number of military applications, but most notably is the Iron Dome,” Bolel told Cronkite News. The midair interception technology came “out of Rafael and Arizona, so there’s a lot of military collaboration between the two governments.”

The Iron Dome is a short-range anti-rocket system, with an intercept range of 2.5 to 43 miles, and has been relied on during the recent conflict. A shaky ceasefire remained in place Monday, but the Associated Press reported Israel launched airstrikes on the Gaza Strip late last week.

Last month, clashes escalated between Palestinians and Israeli police when Israel tried to block some Muslims gathering at al-Aqsa Mosque in Jerusalem’s Old City at the beginning of Ramadan, the AP reported. Tensions over a plan to evict dozens of Palestinians from an east Jerusalem neighborhood also fueled confrontations.

Israeli airstrikes on Gaza caused the majority of casualties. According to human rights officials at the United Nations, as of May 27, the conflict had killed at least 256 Palestinians and injured nearly 2,000. The UN Office for the Coordination of Humanitarian Affairs said that 72,000 Palestinians were displaced as a result of the IDF strikes. At least 12 Israelis were killed and Israeli officials reported at least 200 injured, according to the BBC.

The Iron Dome is credited with more than 2,500 intercepts and a success rate exceeding 90%, according to Raytheon’s spokesperson. According to the Israel Defense Forces, more than 4,300 missiles were launched toward Israel just during the latest conflict in May.

Alleging that the al-Jalaa Building housed Hamas and anti-Iron Dome research, Israel targeted an airstrike to the building during last month’s conflict, which housed offices for the Associated Press, Al Jazeera and other media in Gaza City. Israeli officials have since rolled back some of their early accusations, and the AP has denied there was any indication of Hamas in the building.

Dramatic images from the recent conflict show the Iron Dome intercepted many of them, by targeting and destroying incoming projectiles. The system had faced earlier tests, with conflicts in 2012 and 2014. In 2012, Israeli officials said the Iron Dome intercepted 85% of more than 400 rockets fired by Gaza-based militants, according to a congressional report. Subsequent upgrades improved the Iron Dome’s interception rate to close to 90% in 2014, the report said.

Activists disagree on the value of the Iron Dome – some say it’s a vital tool, others say its use prolongs conflict.

Mohyeddin Abdulaziz, spokesperson and volunteer with the Arizona Palestine Solidarity Alliance, said one of the biggest problems in the Israeli-Palestinian conflict is that the U.S. unconditionally supports Israel. Abdulaziz believes this prolongs the conflict.

The U.S. and the international community ignore the United Nations’ rules by continuing to trade with occupational settlements, Abdulaziz said, noting that the UN has made rules for recognizing Palestinian rights regarding settlements but they go unheeded. Pro-Israeli activists say the Iron Dome technology is vital.

“We wish the Iron Dome weren’t necessary and that Israelis and Palestinians could live and thrive in peace,” said Roz Rothstein, co-founder and CEO StandWithUs, an international, nonpartisan Israel education organization. “One of the main reasons (Hamas) have failed in their attempts to murder thousands of Israelis is the Iron Dome, a technology developed through crucial cooperation between Israel and the United States.”

PrevPreviousOpinion: Do These Folks Know They Are Journalists…..or Impersonators
NextArizona Weekly Gas Price Update – Week of June 21, 2021Next