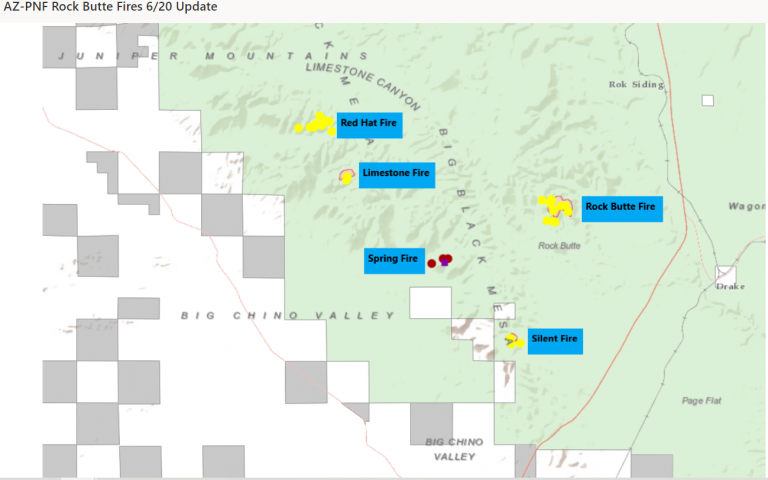 Between June 17 and June 19 firefighters have been challenged by numerous lightning ignited wildfires across the northern portion of the Prescott National Forest. The Arizona Central West Zone Type 3 Incident Management team has been assigned the management of five fires located west of Highway 89 and north of Paulden, within the Chino Valley Ranger District. The five fires are being referred to as the Rock Butte Fires and are comprised of the following fires: Red Hat Fire, Limestone Fire, Spring Fire, Rock Butte Fire, and the Silent Fire. The team is also responsible for any new starts within their assigned
management area.

The Red Hat and Limestone Fires are the most northern of the fire wildfires are being monitored by aircraft due to extremely rough and rugged terrain and are showing minimal activity. The Spring, Rock Butte, and Silent Fires to the south are the most active and most visible of the fires, with the Rock Butte being the largest currently. Firefighters will be working to manage and contain these fires. Firefighters will be utilizing roads, trails and natural features or areas of lighter vegetation to contain the fires with the assistance of heavy equipment such as dozers, and aviation resources such as airtankers and helicopters as needed.

CLOSURES: None currently, as of update, but anticipated for the fire area.

The Rafael Fire was discovered on June 18, 2021, the result of passing predominantly dry thunderstorms. The fire is located approximately 4 miles north of Perkinsville, AZ. Strong winds from the west in combination with terrain, and low humidity caused increased fire behavior today, increasing the side of the fire significantly.

The Arizona Central West Zone Type 3 Incident Management Team will assume management of the Rafael Fire, (which is east of Highway 89) in addition to the fires being managed as the Rock Butte Fires (5 lightning caused fires located west of Highway 89, north of Paulden, AZ).

Information for the Rock Butte Fires located west of Highway 89, north of Paulden, AZ is on available on Inciweb: https://inciweb.nwcg.gov/incident/7556/

Wildfires are a NO DRONE ZONE – If you fly we can’t!

Stage II Fire Restrictions are in effect across the Prescott NF.

Garland Prairie is reminded to be in READY mode.

Cause: Human, under investigation

Overnight, winds were favorable and there was limited fire growth. Firefighters patrolled for fire activity to protect values in Dripping Springs, Wind Spirit, Hagen Ranch, Slash S Ranch, El Capitan, and along State Route 77. The fire continued to back down through pine stands on Pinal Mountain to Forest Service road 651.

Sunday, forecasted strong winds may produce rapid fire spread to the southeast from Mescal Mountain. Crews will utilize holding features as necessary to protect the electrical power transmission lines supplying the San Carlos Apache communities. Firefighters will continue to monitor for fire activity and protect communities and infrastructure along State Route 77, Dripping Springs Road, and Ray Mine. Suppression repair work will continue along the U.S. Route 60 corridor and Forest Service road 651. Smoke may be visible as fire backs down upper Kellner and Icehouse Canyons and as pockets of unburned vegetation within the fire perimeter experience increased fire activity. State Route 77 is open from the junction of State Route 77 and U.S. Route 70 to El Capitan for El Capitan residents only.

The Pinnacle Fire continued to move within the Santa Teresa Wilderness Saturday, generating another substantial column of smoke by midafternoon. Fire activity increased towards the north in two separate locations. The first, west of Black Rock Ranch and the other along the western boundary of the Wilderness. Both moved into canyon bottoms with abundant fuels and began to burn with intensity. Fire fighters responded with helicopter water and retardant drops to cool some of the activity as both threatened private property outside the wilderness.

Wind is generated by the location of a high-pressure ridge overhead, which is presently moving slowly to the southwest from its current location over the Four Corners area. This movement yesterday created a gradual wind direction shift from southeast to north-northwest winds. Due to the slow movement of the ridge, it was late in the day before the shift occurred. The wind shift is significant as it pushed the fire in new directions. Fire fighters have prepared outside the Santa Teresa Wilderness with constructed bulldozer lines to defend private property and other values.

The eastern and southern portions of the fire remain calm with little fire activity. All of the declared containment of the fire line exists along this portion of the fire.

Currently assigned resources include 5 hand crews, 4 helicopters, 28 engines, 11 water tenders, and 4 dozers. Resource numbers are adjusted as operational needs are determined daily and within the constraints of competition from other fires across Arizona.

GO: All Black Rock Road area residences, and all residences in the Klondyke-Aravaipa corridor in Graham County. For “Ready, Set, Go” information follow this link: https://wildlandfire.az.gov/ and https://ein.az.gov/ready-set-go.

Closures: The existing FAA designated Temporary Flight Restriction for the fire area has again been adjusted to compensate for fire growth. The Coronado National Forest, Bureau of Indian Affairs, and the Bureau of Land Management have closure orders in effect. For specific closure information visit the following agency links: https://Coronadonationalforest/Facebook.com and https://inciweb.nwcg.gov/incident/closures/7523/

Restrictions: Throughout southern Arizona the multiple agencies and jurisdictions are in varying levels of restrictions. For specific information for each, visit the link https://wildlandfire.az.gov/fire-restrictions.

Overnight fire activity along the western flank of the fire was visible from Camp Verde. Firefighters continued to monitor the fire progression around the both the western and eastern flanks of the fire and continued to prepare containment features to support today’s operations. Today firefighters and heavy equipment will reinforce control features to the south and west of Strawberry and Pine; and prep for future burnout operations as necessary to strengthen holding features and protect the communities and values at risk.  Aviation resources will focus on keeping fire from moving into Deadman Mesa and Hardscrabble Canyon.

Another day of extreme fire behavior is expected with growth to the north and east.

Backbone Fire activity has increased to the north and west, moving towards Needle Rock Ranch and State Route 260. Residents of Camp Verde are seeing large smoke column this afternoon as winds push to the south. Water scooping aircraft is being used to keep the west side of the fire in-check, while resources on the ground put in hand and mechanical line.

APS is working closely with the agencies responding to the Backbone Fire. While we don’t currently anticipate a disruption in service, we are monitoring the fire’s progress in the event there is a need to take power lines out of service to protect firefighters and/or the fire or smoke impacts to electrical infrastructure. Customers can visit aps.com/outagecenter for information on how to be prepared for an outage and to view the APS outage map.

Weather: Extreme temperatures will continue today with single digit humidity. Scattered dry thunderstorms may develop to the north and west this afternoon and linger into the evening.  Southwest winds will increase with gusts of 20 – 25 mph this afternoon.

Evacuations: Evacuation orders were issued for the communities of Pine and Strawberry. Residents and visitors should contact their county or visit https://ein.az.gov/ready-set-go for information regarding evacuation status.

An emergency area fire closure has been issued to protect public health and safety from fire activities.  All Tonto, Coconino, and Prescott National Forest lands, roads, and trails in the area of the Backbone Fire are closed. Full details of area and road closures are available on the Backbone Fire Inciweb page at: https://inciweb.nwcg.gov/incident/7545/

No Drone Zone:  A temporary flight restriction remains in place over the Backbone Fire.

The Wyrick Fire is approximately eight miles northwest of Heber on the Black Mesa Ranger District of the Apache-Sitgreaves National Forests. The fire is burning in pinyon-juniper and grass with long range spotting up to one-quarter mile. There are approximately 60 personnel on the fire. Major concerns are the 500 kV lines west and northwest of the fire and the Chevlon Retreat.

Smoke: Smoke from the Wyrick Fire may impact Heber, Chevlon Retreat and surrounding communities. An interactive smoke map at https://fire.airnow.gov/ allows you to search for current smoke information.
Closures and Evacuations: There is a temporary road closure at the junction of 504/99 to the Salvation Army on 504.

A new lightning-caused fire started on the Black Mesa Ranger District of the Apache-Sitgreaves National Forests Saturday, June 19. The fire is about 13 miles from the Forest Lakes community and is called the West Chev Fire.

As afternoon temperatures rose, fire activity increased with running and torching in Ponderosa pine, grass, and brush. At times, the fire was spotting embers in all directions. Fire personnel assigned to the incident worked to clear the area of forest visitors as extreme fire behavior continued. The major concerns in this area are energy infrastructure, Chevlon Canyon, T&E species, heritage sites and summer cabins.

While the fire is approximately 75 acres now, there is significant potential for rapid fire growth due to abundant fuels in the area. On Sunday, forest officials decided to order a Type 2 Incident Management Team to assist with this fire.

Smoke: Smoke from the West Chev Fire Smoke will disperse to the north, northeast and  settle into the Chevlon Canyon and local drainages at night and in the early morning. An interactive smoke map at https://fire.airnow.gov/ allows you to search for current smoke information.