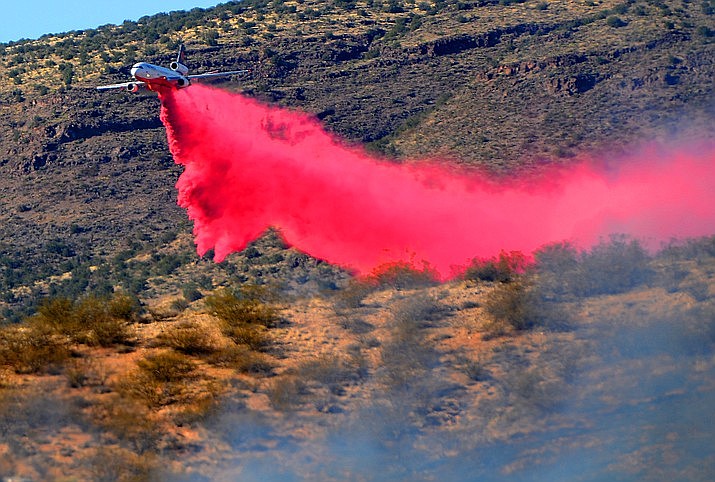 The Cornville Fire was reported around 12:30 p.m. on Sunday, east of the community of Cornville. The fire was being driven by windy conditions and dry fuels, such as grass, brush, and piñon juniper.  Approximately 149 personnel are currently assigned to the fire, including engines, water tenders, a hand crew and aircraft.

The fires overall activity was minimal today burned away from populated areas. Firefighters will be patrolling and monitoring the established fire lines throughout the night. The fire is currently not moving but is expected to increase as temperatures warm up. Extreme temperatures and dry winds, along with rugged terrain will challenge firefighters over the next several days.

Per YCSO, all evacuations have been lifted. Residents are encouraged to remain prepared and stay READY. Sign up for emergency alerts through your county emergency management office website.

The Slate Fire, located 23 miles northwest of Flagstaff along both the east and west sides of Highway 180, is now at 10,677 acres and 23 percent containment.

A Forest Order was issued Saturday closing parts of the forest located near the fire for safety reasons. Windy and active wildfire conditions, along with burnout operations conducted last week, are the main factors in the growth of the fire, which is moving in a western direction.

Crews plan to spend the early part of this week securing existing control lines as well as conducting surveys of heritage and cultural sites in the area. Crews also plan to keep a watch out for spot fires that may spark south of control lines, and will perform bucket work with helicopters on scene as needed, depending on how spot fires behave.

Highway 180 will remain closed between mileposts 235 and 248 for the foreseeable future due to smoke impact and crew work in the area. Crews will need to remove potentially hazardous dead trees alongside the road before the stretch of 180 can be reopened.

Crews continue to secure Cedar Ranch, and several recreation sites in the area remain closed, including the Red Mountain and Slate Mountain trailheads, Kendrick Cabin and a portion of the Arizona Trail from Kelly Tank (mile 603.3) to Cedar Ranch (mile 616.2).

The fire was called in by a Coconino County Sheriff’s Officer at 3 a.m., and the cause is still under investigation. Motorists should avoid Highway 180 north of Kendrick Park, and visitors to the Grand Canyon National Park should use Highway 64 from Williams to access the entrance to the Park. Details about the Slate Fire will be posted on InciWeb, as well as Facebook and Twitter.

Cause: Human, under investigation

The Telegraph Fire spotted across State Route 77 early this morning near Capitan Pass and a second time just south of Grantham Ranch. The fire’s edge has moved adjacent to El Capitan on the west and east side of SR 77, and east across SR 77 to the San Carlos Apache Reservation border. The fire is currently about 2 miles from the Mescal Fire.  Hand crews and dozers are working to build fire line around the spot fire.  Structure protection crews in the El Capitan area are using all of the contingency lines and prepositioned hoses, pumps and water to protect the values at risk in and around El Capitan. Airtankers and helicopters are dropping retardant and water in support of ground crews’ efforts.   Fire behavior is too severe to allow firefighters to access and work in the areas of Pinal and Signal Peaks.  On the north side of the fire, crews continue to patrol and mop up pockets of unburned fuel which flare up along U.S. Route 60. The San Carlos Apache Tribe and the U.S. Department of Interior Bureau of Indian Affairs have joined forces with the fire team as cooperators.   Evacuation status for the communities of El Capitan (east and west), Dripping Springs, and Beverly Hills is now “Go.” Evacuation status for Top-of-the-World, Bellevue, Oak Flat, Six Ice and Skill Set is now “Set.” Evacuation status for Superior, Globe, Pinto/Carlotta, Miami, Central Heights, Claypool and the Battle Axe area is now “Ready.”

Notifications can change rapidly. Residents in areas affected by the fire should remain vigilant and be prepared to evacuate. Evacuation notifications are issued when danger is imminent and life threatening.

Announcement: There has been no increase in size for the Mescal Fire for the last four days. However, a new fire, called Gravel Fire, was reported near Soda Canyon on Sunday afternoon, June 13. The cause is under investigation and firefighters worked late into the night to fire out and catch the new start. Additionally, fire activity from the Telegraph resulted in the closure of Highway 77, on Sunday afternoon.

Mescal Fire crews continue to patrol the firelines, increasing containment and repairing impacts from firefighting activities across the burn area – including bulldozer lines and other suppression tactics. While no communities are under evacuation orders due to the Mescal Fire, residents are encouraged to stay abreast of potential evacuations due to the Gravel Fire as well as the Telegraph Fire. Evacuation information can be found on county sheriffs’ departments’ Facebook pages, Gila County Emergency Management Facebook page, or the San Carlos Tribal Emergency Response Commission Facebook page, which are listed below.

With air temperatures reaching 110+ degrees in the Gila Valley and year-long intense drought, the Pinnacle Fire continued to grow Sunday.  Before noon, the fire’s progression on the SE corner of the fire’s perimeter had reached a point that triggered the Graham County Sheriff’s Office to order the evacuation of homes north of the Aravaipa-Klondyke road and east of the fire. The Aravaipa-Klondyke road has been closed to all travelers except residents. With fire lines in this area constructed in more favorable terrain with less fuels, fire managers focused efforts on structure protection.

At the SW segment of the fire, terrain winds pushed fire down canyon onto State Trust Lands. Fire fighters, aided by two bull dozers and air drops of water and retardant, focused on limiting its spread. Night crews last night continued that effort through the night.

Firefighters will work the southern and eastern perimeter of the fire, continue structure protection actions, scout the Black Rock Road corridor for defensible terrain and natural barriers, and plan for additional northward movement of the fire.

Currently assigned resources include 6 hand crews, 3 helicopters, 13 engines, 9 water tenders, and 2 dozers. More resources have been ordered and continue to arrive. This fire is producing high quantities of smoke. An aerial resource advisor is engaged and has installed smoke monitors. Learn more at: https://wildlandfiresmoke.net/outlooks/EastCentralArizona

Evacuations: All residences southeast of the fire and north of the Aravaipa/Klondyke road were placed in GO evacuation status as of 2 p.m. yesterday. Residences located in the Klondyke area have been placed in READY status.

With the intensity of this year’s fire season, Graham County residents should take the time to be familiar with Arizona’s “Ready, Set, Go” program relating to evacuations. https://wildlandfire.az.gov/ and https://ein.az.gov/ready-set-go.

Closures: Coronado National Forest portion of the Santa Teresa Mountains. See: https://Coronadonationalforest/Facebook.com. A Temporary Flight Restriction has been enacted for the surrounding area by the Federal Aviation Administration.