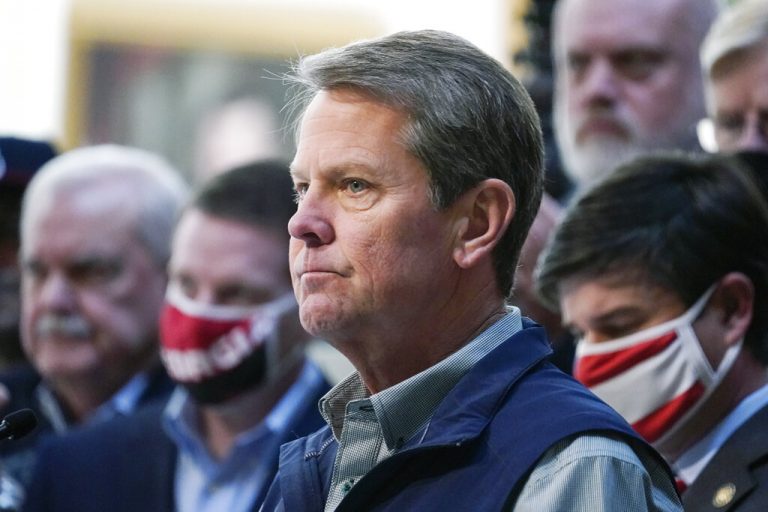 Photo: In this April 3, 2021 file photo, Georgia Gov. Brian Kemp speaks during a news conference at the State Capitol in Atlanta

Republican governors running for reelection have begun trumpeting the party’s more hands-off approach to the coronavirus pandemic, trying to flip the script on an issue that helped Democrats win the White House and control of Capitol Hill in 2020.

GOP governors, especially in populous, diverse Sun Belt states, credit a resurgent economy to their resistance to strict public health protocols they frame as shackles. At the same time, Republican challengers are hammering Democratic governors as slow to relax business restrictions, end mask mandates and reopen schools full time. And across the board, Republicans relish swipes at Democratic bastions New York and California, “lockdown states” where unemployment remains higher than the national mark.

The political and economic realities are more complicated than the rhetoric suggests.

States, regardless of partisan control, have benefited from trillions in pandemic aid approved by Congress and vaccines that governors had no role in developing. Yet Republican leaders believe, at least for now, they can capitalize on circumstances that just last November helped deny Republican Donald Trump a second presidential term.

“Choosing to lock down heavy and hard for an extended period of time hasn’t proven to help states in the long run,” said Joanna Rodriguez of the Republican Governors Association. She said GOP governors “talked to each other throughout the pandemic and talked about what was working. Now we can see the value of that leadership. … Our governors certainly will run on that record.”

But it’s not clear that states with tighter lockdowns necessarily fared worse than others. Economists at the UCLA Anderson Forecast in Los Angeles found in a new analysis that among large state economies, those with more pandemic restrictions, including California, generally had less economic contraction in 2020 than states with looser regulations. The researchers argued there was a correlation among stricter protocols, lower COVID-19 infection rates and the gross domestic product.

But that’s not the argument coming from Republicans.

Georgia Gov. Brian Kemp recently described his stewardship of a “measured reopening” as the way to “protect lives against COVID-19, but also protect your livelihood and your paycheck.” Speaking at the state GOP convention recently, he took swipes at “Joe Biden and the liberals,” along with “scientists and doctors that were getting paid to sit in their basement during the pandemic” and urge a shuttered economy.

Kemp emphasized the most recent unemployment data. U.S. Bureau of Labor statistics measured a 4.3% April unemployment rate in Georgia, compared with 6.1% nationally. The U.S. rate fell to 5.8% in May. State-by-state data for May hasn’t been released.

Georgia had “the lowest unemployment rate” among the 10 most populous states, even lower, Kemp crowed, than GOP-run Florida and Texas, “and, of course, lower than New York and California,” where unemployment measured 8.3% and 8.2%, respectively.

“None of that would’ve been possible had we done lockdown policies … had we done a lot of the things a lot of these other states have done,” he told reporters recently. He dismissed a potential general election rival, state Agriculture Commissioner Nikki Fried, as a “lockdown lobbyist” and insisted she would have closed businesses and schools.

Fried lacks the broad executive authority that DeSantis has had in those arenas, but the governor’s swipes nonetheless allowed him to highlight his early push to reopen Florida’s restaurants, bars and other hot spots in the state’s tourism-heavy economy.

In Texas, where the oil industry hasn’t rebounded completely from Americans’ drop in travel, unemployment was 6.7% in April, higher than nationally. GOP Gov. Greg Abbott is embracing the overall economic uptick anyway. Abbott made his state one of the first to reject extra unemployment insurance aid from Washington on the grounds that “the Texas economy is booming.” The $300-per-person weekly boost will end later this month under Abbott’s order. Most Republican-led states have followed suit.

As long as the economy continues to recover, Democratic governors also will run on their leadership through the pandemic, likely arguing that the tight lockdowns and protocols work.

“Any governor is going to talk about how they steered their state through this and got people back to work,” said Dave Carney, one of Abbott’s top political advisers, while any challenger, he added, must poke holes in the incumbent’s narrative.

Paul Maslin, a Democratic pollster who has worked statewide campaigns across the country, said that coming out of an event as all-consuming as a pandemic, those textbook plays come with unknown risks and rewards for both parties.

Republican governors, he noted, are happy to embrace an economy juiced by federal aid, the largest chunk coming this year without any Republican votes in Congress. But the same economy, Maslin noted, is showing signs of inflation, a potential red flag that could ensnare both congressional Democrats and incumbent governors of either party in 2022 if the national mood sours.

Similarly, he said, “what happens to our kids” in the coming school year could become a flashpoint.

Republicans are pushing that case already with attacks against Govs. Laura Kelly, D-Kan., and Gretchen Whitmer, D-Mich., for their earlier position on closing schools. The GOP also is testing the reach of parents’ frustration in Virginia, trying to saddle Democratic nominee Terry McAuliffe with outgoing Democratic Gov. Ralph Northam’s pandemic policies ahead of the state’s election this November.

But Democrats said Kelly, Whitmer and Northam get generally good marks from voters for taking the pandemic seriously. “It’s a political mirage,” said Jared Leopold, a former top aide at the Democratic Governors Association who worked for one of McAuliffe’s primary rivals. “Trying to make people upset in November of 2022 that schools were closed in April or May of 2021 is tough.”

The bigger variable on education, Democrats argued, is whether the upcoming school year reveals long-term problems with student achievement, something Maslin said would put any incumbent on the defensive, whatever their COVID-19 actions had been.

Ultimately, Leopold said, “governor’s races are more about leadership” because “people are looking for someone who they trust in a crisis.”

Leopold and Carney, the Republican adviser to Abbott, agreed that dynamic often benefits governors unless they failed abjectly. They also said there’s plenty of time for circumstances to change.

“The key judgment is going to come on how the economy and health situation looks in fall 2022,” Leopold said. “This is all just sort of the pre-match tussle.”