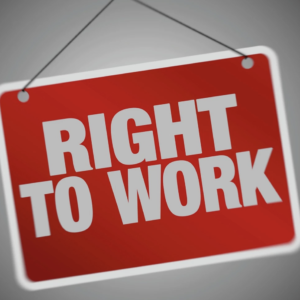 No state in the left-leaning, union-friendly Northeast is currently a ‘right to work’ state. New Hampshire Republicans may be about to breach that wall, and a new poll says they’ve got a majority of Granite Staters on their side.

A right to work law guarantees that no person can be compelled, as a condition of employment, to join or not to join, nor to pay dues to a labor union. Republicans are pushing legislation to make New Hampshire the 28th state with a right to work law, one Republican Gov. Chris Sununu is almost certain to sign.

Right to work advocates see it as a simple matter of freedom of association, arguing it is unfair to force workers to be a member of a union or pay union dues if they don’t want to. They also argue the right to work states have higher economic growth than their union-mandating counterparts.

“This legislation will attract new companies to our state, empower workers to hold unions accountable, and it will help spur economic development and create more good jobs,” said state Sen. Bill Gannon (R-Sandtown), a sponsor of the bill, SB 61. “The fact is that right to work states are currently outperforming New Hampshire in job growth, consistency more than doubling the Granite State. And once passed and in effect for a while, these laws are extremely popular.”

In March, a Granite State Poll conducted by the UNH Survey Center found 44 percent of local residents supported right to work, while 31 percent were opposed.

Opponents of the legislation believe unions are a benefit to workers, and that non-union employees still benefit from union-negotiated contracts, whether they are a dues-paying member of their local union or not.

The AFL-CIO, the largest union in the country, opposes the legislation.

“Right to work is wrong for New Hampshire, plain and simple. It deprives workers of their freedom to join together and form strong unions if they choose to,” AFL-CIO Communications Coordinator Kalina Newman told InsideSources. “All that so-called right to work laws do is suppress wages, lower workplace safety, and reduce the quality of services we rely on in our communities.

Their opposition to the legislation is unsurprising, as the move would likely cost the AFL-CIO membership, and in turn, income from dues. After Idaho and Oklahoma passed right-to-work laws, union membership in their states fell 15 percent according to the conservative Heritage Foundation.

“Passing right to work would be a huge win for New Hampshire, further strengthening our New Hampshire Advantage. As the only state in the Northeast with right to work, we will attract even more workers and businesses,” said Greg Moore, Americans for Prosperity’s New Hampshire State Director. “With lower taxes, more freedom, and protections that give workers the ability to decide whether to join and pay a union without risking their job, New Hampshire is set up for both short-term and long-term growth.”

New Hampshire is also currently in the national spotlight as two workers who say they were forced to pay union dues without their consent have petitioned the United States Supreme Court to force a refund from the State Employees Association of New Hampshire.

The petition was filed by the National Right to Work Legal Defense Foundation on behalf of the two SEIU Local 1984 workers, Patrick Doughty and Randy Severance. NRTW argues that forcing Doughty and Severance to pay union dues without “affirmative consent” goes against the court’s landmark Janus v. AFSCME ruling.

“Union bosses violated the rights of workers in New Hampshire and across the country for decades, and now they must return a few years of those ill-gotten gains,” said National Right to Work Legal Defense Foundation President Mark Mix in a statement. “The Court should grant Doughty and Severance’s petition and make it clear that union bosses cannot simply pocket the proceeds of their unconstitutional forced dues scheme.”

New Hampshire’s vote could be overridden by the Biden administration, along with the other right to work states, if Congress passes the so-called PRO Act. The Protecting the Right to Organize (PRO) Act would effectively overturn state right-to-work laws, replacing them with federal, pro-union regulations.

Both New Hampshire Sens. Maggie Hassan and Jeanne Shaheen support the PRO Act, which means it could be an issue in 2022 if, as many political observers believe, Sununu decides to take on Hassan next year.