Opinion: What Are We Memorializing? 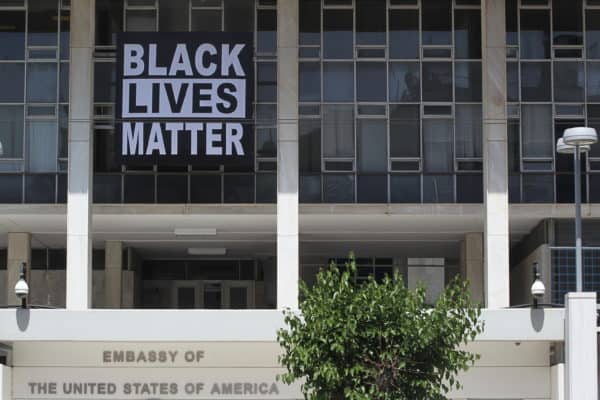 So what are we to make of American embassies that fly Black Lives Matter flags? The BLM flag now represents the United States. It’s bizarre enough for an embassy to endorse any political movement, let alone one that claims that police departments cannot be reformed because they came out of “slave patrols” and “white supremacy.” Does the Biden Administration believe this? If not, why is it putting the BLM flag almost on the level of Old Glory? If anything, BLM is above it. Burning an American flag is hardly worth nothing but burning a BLM flag could be a hate crime.

Normally, an embassy presents a nation’s history, victories, and accomplishments. The American State Department tells the world we are a racist country and Secretary of State Antony Blinken says we do this so we can “live up to the values that we stand for worldwide.”

“On the anniversary of George Floyd’s murder, we remember that to be a credible force for human rights around the world, we must face the reality of racism at home. By addressing our shortcomings openly and honestly, we live up to the values that we stand for worldwide.” (Tweet from Secretary Antony Blinken, May 25th, 2021.)

What are these values? To take some recent examples from the State Department, they include promoting more Third World immigration, celebrating “Asian American & Pacific Islander Month,” and advocating “diversity and inclusion.” Non-whites are complaining to CNN that the State Department itself is racist, so the Secretary has a long way to go. CNN frets over the “microaggressions, quiet bigotries and structural hurdles that diplomats say ripple under the State Department’s cosmopolitan veneer.”

In the meantime, the language of the college campus has come to the State Department.

“@POTUS has proposed a multi-year, $4 billion regional strategy to address the root causes of migration, along with a comprehensive strategy for collaborative migration management to promote safe, orderly, and humane migration throughout North and Central America.” (Tweet from @StateDept, May 30, 2021)

The State Department thinks it can eliminate the “root causes” of mass immigration by ending “cycles of desperation.” “

“Cycles of desperation” don’t happen because we don’t give Central Americans enough money. Third World people create Third World societies. We can’t end “desperation,” but we are certainly importing it. We’re in a battle we can’t win unless we discuss racial reality.

To paraphrase the federal government’s line, America is a racist country. Admitting this helps us fight racism abroad. The best way to do that is by encouraging more immigration and diversity at home and sending more American money abroad. Hanging the BLM flag at embassies shows what America represents today. For whites, the flag means guilt and self-hatred. For blacks, it’s a desire for revenge and profit. For other non-whites, it’s a sign that if they organize on racial grounds, the government will surrender to them.

The power of the state has been hijacked and tuned against the people who built and sustain the state. The American flag at embassies seems almost like an afterthought. Few can agree on what that Old Glory means today, but it’s very easy to define what BLM is and what it wants. BLM tells us.

This raises a deeper question. This Memorial Day, what are our rulers memorializing? Can they memorialize anything? Our opponents, who control media, universities, and corporations have redefined American history into a litany of shame. Christopher Columbus is a genocidal villain. Instead of Columbus Day, we celebrate “Indigenous People’s Day,” which means that “America” would be better if Europeans had never come. We can’t celebrate the conquest of the West because it’s “stolen land.”

We can’t celebrate the Revolution because the Founders owned slaves. Statues of George Washington, Thomas Jefferson, and others must come down.  We can’t celebrate the national anthem; instead, blacks must hear their own. We can’t celebrate the Mexican-American War. The federal government has even funded murals celebrating the Hispanic racial myth of “Aztlan” and the implied claims on American territory. The Union victory over the Confederacy is still remembered fondly by our rulers, but I expect academics will get around to what General Sherman did to the American Indians, once the last Confederate monuments are dealt with.

Even the late 19th and 20th centuries are a problem. The Spanish-American War ended with American domination over non-white peoples. The World Wars were fought by a segregated army. During the Cold War, the United States often opposed non-white “national liberation” movements in Latin America, the Middle East, and, of course, in Vietnam. American patriotism has faded and it’s not surprising. If you’re white, you realize the System is against you. If you’re not white, the government tells you the System is racist.

The federal government is endorsing a radical, anti-white political movement and elevating it to something close to a state ideology. The supposedly “authoritarian” Donald Trump would never have dreamt of something so bold, and those who think America will return to the good old days of Ronald Reagan are dreaming.

Telling white Americans their history is shameful and that their time is past might not be the best government strategy. Our rulers still seem eager to tangle with China, Russia, Iran, and others. If the shooting begins, without whites, America will lose. But why should whites fight for a government that despises them?

This is a cold civil war in which there can be no peace. There is no point at which our opponents will say racism has been defeated. They are at war with nature, so “equity” will never arrive. That is why non-whites and their allies define racism ever more broadly. This leaves whites with no choices except groveling, defiance, or emigration. Emigration can mean leaving the country or just mentally fleeing into video games or movies. However, even those escapes are turning into clumsy anti-white propaganda. There’s no way out.

I could almost respect our rulers if they were honest. The Regime wants to claim America’s patriotic legacy even as it establishes a political and cultural order almost exactly opposed to what America used to be. It is deeply sick to don the mantle of “patriotism” as you flood the country with foreigners and pour scorn on our history and heritage. If World War II soldiers could have seen America in 2021, would they have charged the guns on D-Day? They’d probably swim back to their ships or maybe join the defenders.

Joe Biden tells us that America isn’t based on ethnicity, geography, or religion, but simply “an idea” that was “never lived up to.” Presumably he meant equality. If so, it’s a profoundly stupid idea.

Of course, America wasn’t founded on “an idea.” It was founded by whites who had a strong sense of racial identity and saw themselves as part of Western Civilization. Unfortunately, our openness meant America was turned against itself. Now, government officials go through the motions honoring veterans who fought for a country they have perverted beyond recognition.

With no culture, history, kinship, or even language to hold us together, Memorial Day is just a day off.

What we should remember on Memorial Day is not just all the servicemen who died for the United States of America. We should mourn the nation that died. It is pure foolishness to pretend that the America of Kamala Harris has anything to do with the America of George Washington or even Teddy Roosevelt. Like the Red Army soldier planting the hammer and sickle on the Reichstag at the end of World War II, the BLM banner on the embassy symbolizes the overthrow of an old order and the imposition of a new.

Where does this leave us? We must take inspiration from the heroes of the past to build something new. However, it can’t be based on “civic nationalism,” slogans about equality, or promises of tax cuts and efficient economies. It must speak to our souls. This country was founded by men who treasured their history and liberties but weren’t afraid to challenge the existing order. We must show similar courage. This Memorial Day, I mourn those who died for a now-dead republic, and we can draw strength from their example and build something better.