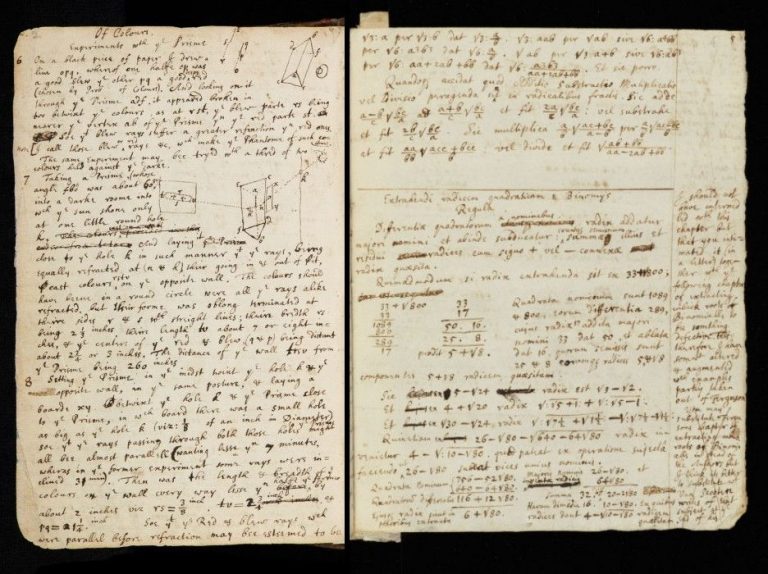 Handwritten notes that show one of history’s greatest scientific minds in action are going up for auction in London.

Pages containing Isaac Newton’s jotted revisions to his masterwork, the “Principia,” are expected to sell next month for between 600,000 pounds and 900,000 pounds ($850,000 and $1.3 million), auctioneer Christie’s said Tuesday.

Published in 1687, Newton’s “Philosophiae naturalis principia mathematica” — “Mathematical Principles of Natural Philosophy” — set out the laws of gravitation and motion and is considered a scientific watershed. A first edition of the book sold at auction for $3.7 million in 2016.

Thomas Venning, head of books and manuscripts at Christie’s in London, said the book “reinvented our understanding of the universe.”

The page and a half of notes for a planned second edition includes comments and diagrams by Scottish mathematician and astronomer David Gregory. The two scientists met and corresponded while Newton worked on revising the “Principia” in the 1690s.

Venning said that when he was working on the revisions, Newton was “fizzing with the energy of one of the greatest minds the world has ever seen.”

“And we can see that at work, the speed with which he’s writing, the ferment of ideas coming out from his pen,” he said.

Keith Moore, head librarian at the Royal Society — the scientists’ club where Newton was president in the 18th century — said Gregory “kept up a written dialogue with Newton. He met Newton and that partnership, almost, between the two of them, resulted in refining Newton’s thinking.”

Newton eventually gave up on the revisions, but ultimately produced a new edition in 1713.

The document will go under the hammer at Christie’s in London on July 8.

“What a collector in the autograph world is looking for is the greatest minds in history, talking about their greatest achievements,” Venning said. “It’s very, very rare to have that combination. And that’s what you have in this particular manuscript.”