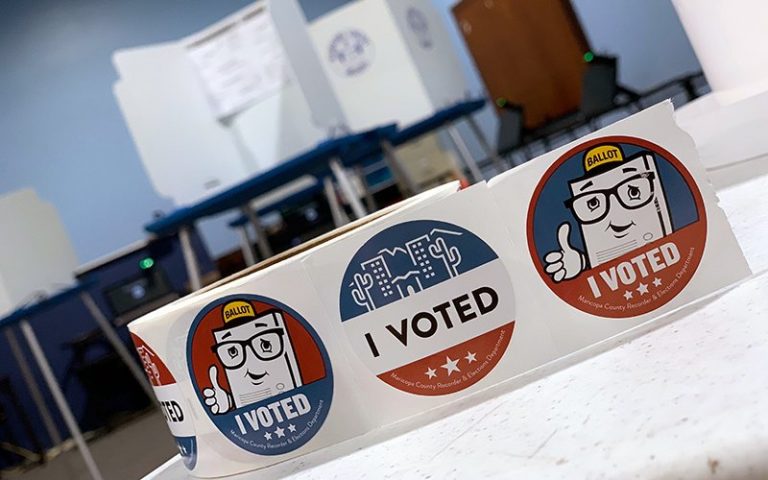 Democratic and Republican members of the House Administration Committee stuck largely to their talking points during a hearing on the effect that voter ID laws, proof-of-citizenship requirements and lack of language assistance have on elections.

Republicans dismissed suggestions that voting ID laws have a disproportionate impact on minority voters, pointing to the turnout in the 2020 elections as proof.

“In 2020 we saw more people cast a vote than any other presidential election in history, further dispelling the myth that voting ID requirements deter people from legally voting,” said Rep. Bryan Steil, R-Wisc.

But Democrats and some witnesses at the hearing pointed to a long list of studies that they said demonstrate, in the words of Rep. G.K. Butterfield, D-N.C., that, “Voting ID laws have been shown to disproportionately decrease minority turnout.”

The committee debate comes as the Arizona Legislature is considering several election bills that echo the national debate, with one side saying the changes protect and the other side saying they restrict voting.

The state had 23 restrictive voting bills for the 2021 legislative session, the third-most in the nation, according to a report by the Brennan Center for Justice at New York University. It also had 15 Democrat-backed voting-expansion bills, but those were quickly killed in the Legislature.

State lawmakers have already passed one measure that would stop the practice of automatically mailing ballots to voters on the state’s Permanent Early Voting List – now called the Active Early Voting List – if they had not voted in at least one election over a four-year period. Gov. Doug Ducey signed that bill into law on May 11.

Democrats blasted the measure as an effort to purge voting rolls. But Ducey said the move only brings Arizona into line with other states that have early voting lists, like California, and that the law requires election officials to reach out to those voters, who can still request a mail-in ballot.

Another pending proposal would stiffen voter ID requirements for absentee ballots. Voters would have to provide their date of birth along with either their driver’s license number or a voter registration number.

Sponsors of the bill did not immediately respond to a request for comment Monday, but critics said the measure, if passed, would confuse voters and increase the chances that their ballots would be thrown out for minor errors. It would also make mail-in voting harder for minority voters, thousands of whom do not have driver’s licenses.

“Driver’s license possession is skewed towards wealthier and white voters,” said Ryan Snow, an attorney with the Lawyers’ Committee for Civil Rights Under Law, who said voting needs to be treated as a right, not a privilege. “This new restriction will have a disproportionately higher burden on minority groups, which is very concerning.”

Snow also said that under the mail-in voting bill, SB 1713, enrolled members of Native American tribes who can now use their tribal ID as a valid form of identification at a polling place would be prohibited from using it to vote by mail.

Aaron Payment, the vice president of the National Congress of American Indians, called the proposed mail-in voting requirement little more than “the haves wanting to prevent the have-nots from receiving the American Dream.”

“Wealthy people have been filling out absentee ballots for a long time now, the privileged class has been doing it for generations,” Payment said Monday. “Now that lower-income and people of color are doing it and we’re watching politicians complain about it while they cast their absentee ballot.… It’s a special brand of American politics.”

But, in Washington, witnesses and lawmakers at the House subcommittee hearing differed on the impact tighter election security laws have on voter access.

Each of the nine witnesses cited studies or surveys to back up their case, with Republicans arguing that election security laws do not disenfranchise anyone when applied evenly, and Democrats arguing that color-blind application is rarely the case.

Matt Barreto, a political science professor at the University of California, Los Angeles, said his studies have shown that white voters were statistically more likely to have the ID required for voting than any other racial or ethnic group in the country.

Butterfield said that something as simple as the cost of getting a government-issued ID for voting – as well as that costs to get the documentation needed to apply for that ID – can pose financial barriers that prohibit minorities voters, who are otherwise eligible to vote, from casting a ballot.

Harmeet Dhillon, founding attorney for Dhillon Law Group, agreed that costs can be a factor for such voters, but that does not mean the law should be relaxed.

“If cost barriers do exist, and I see that as true, then the government should work to eliminate the barriers and not the safeguard,” Dhillon said.