‘It was an open country’: Gadsden resident reflects on life along the border 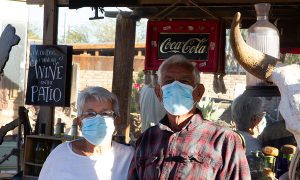 Louie Gradias sits in front of his bright yellow house every day to watch the sun set over a tall border wall bristling with razor wire. He remembers vividly the times when he and his friends used to play in the Colorado River, when there was no wall between Arizona and Mexico and border crossers meant visiting family.

“We were controlled by the flow of the river, we played there, we enjoyed it,” Gradias recalled. “We would go to the river, swimming, water-skiing, fishing, hunting, whatever we wanted to do. It was an open country.”

Gradias was born 79 years ago in Gadsden, a small agricultural town just north of San Luis Rio Colorado, Mexico. He comes from a family of seven. His grandparents moved to Gadsden in 1918.

Gradias said he didn’t see immigration agents until 1954, when they began to patrol the river area in Jeeps.

“During that time, you did not need any papers to cross,” he said, referring to the border agents. “They waved at you and you walked on through. The customs officers got to know you by first name. I can’t remember being told to turn back at all.”

“Over the years, the river dried down to a trickle because all the states fought for the water,” Gradias said. “And I began to see the increase search for undocumented people.”

Customs and Border Protection last month said it encountered more than 172,000 people trying to cross the border with Mexico in March – a 71% increase over February. For fiscal year 2021, CBP said, it has encountered 569,800 migrants at the border, a 24% increase from the previous year. The fiscal year ends Sept. 30.

“Encounters have continued to increase since April 2020, and our past experiences have helped us be better prepared for the challenges we face this year,” CBP said.

Gradias started building his house in 1964, the same year he married Delia Martínez. A year later, the house – less than a mile from where the border wall stands now – was finished and he and his wife moved in. They’ve been there ever since, raising three children while he worked as the Yuma Golf and Country Club superintendent. He retired after 38 years.

The wall outside their door was built in 2019 under the Trump administration, replacing a short metal barrier.

For the past 57 years, Gradias said, he has helped migrants who had just crossed the border.

“We had a number of them who would come knock on the door and they were just asking for water or food and we would give them water and food,” he said.

Delia Gradias said migrants sometimes came to their house when the couple weren’t home, so they left out food and water to help.

“We had a refrigerator in the back with drinks and everything, and when we got home, they had taken the drinks, they went through the backyard, took some of Louie’s shoes and stuff and left their old clothes here, their old shoes here,” she recalled.

“I even have a shawl that the lady had, an old Mexican shawl. I kept it because it’s something that you don’t see around here often at all. You don’t see it at all. You see it in Mexico, but not here.”

When Louie Gradias was a teenager, he said, the only migrants he witnessed crossing the border were people from Mexico, but now it’s a different story.

“There are people from all over,” he said. “They are desperate people coming here to improve their lives.”

From Oct. 1 through March, CBP found 72,526 migrants traveling in family units along the southwestern border. Most were from Central America: 38,921 from Honduras, 18,769 from Guatemala and 7,797 from El Salvador. Mexican migrants totaled 7,039, the agency said.

The report said in Arizona, Yuma is the sector with the most family-unit encounters, increasing 242% from March 2020 to March 2021. The Tucson sector, which includes Nogales, Willcox and Douglas, reported a 53% decline. The Yuma sector had the second-most encounters at the border, after Rio Grande, which increased 489%.

At 16, Louie Gradias knew that he was living in a crucial spot in the country. He started visiting old-timers in the area, seeking photos, artifacts and stories. He was collecting pieces of history. He knew he had a great partner in this endeavor.

“When I got married, I had all of these collections of photos and stuff,” he said. “Luckily for me, I married a girl who took interest in the same stuff.”

After all these years, Louie and Delia have accumulated enough photos and artifacts to open a museum. Among other objects, they have a Bible from 1844 and a phonograph from 1903. Louie also saved pieces of the old post office building in Gadsden, built in 1915. Those pieces were put together in their backyard to look like a post office, and they have a small chapel back there, too. All the objects are part of their history, part of the history of a small border town.

The Gradiases remember a time when migration was not an issue, when there was minimum security along the border. Today they see a lot of the suffering of migrants desperate for a better life.

Louie said that he will continue observing the sunset and the border wall every evening. He and his wife hope for the best for the migrants and the best for this country.

Through the years, the couple have witnessed many changes in the country and in their little town. But one thing has never changed: their love for each other.