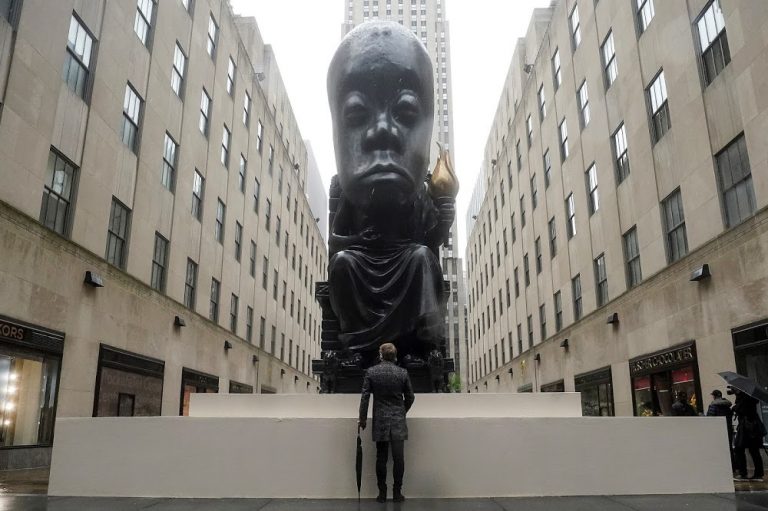 The Art Deco sculptures and reliefs at Rockefeller Center are some great examples of art produced in this country before it collapsed into postmodernism. The Atlas statue is impressive, as is the William Blake-inspired depiction of “Wisdom.” All art is political – even spiritual – and so it has a message. What is this trying to tell us? 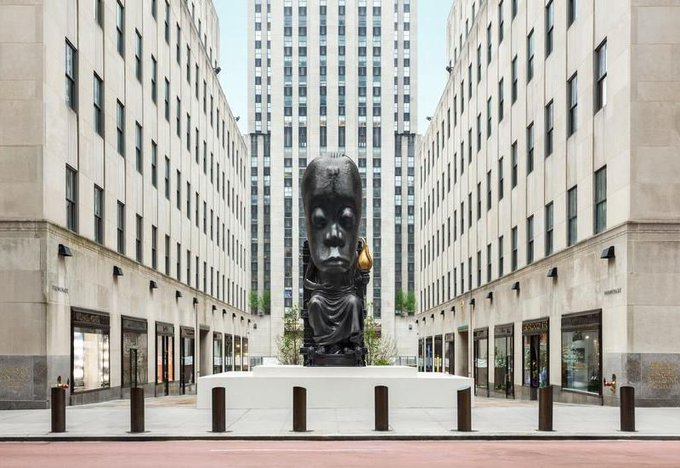 The face looks like the cover from Erectus Walks Amongst Us. The head reminds me of “Yakub,” the mad scientist Elijah Muhammad blamed for creating white people. If I were black, I’d be offended.

One recalls Kehinde Wiley’s mediocre portrait of Barack Obama. At least his wasn’t as bad as the portrait of his wife. The Obama painting does not glorify its subject; instead, it degrades other presidential portraits. Washington, Jefferson, and Roosevelt — all in the same series in the same gallery — lose their dignity. 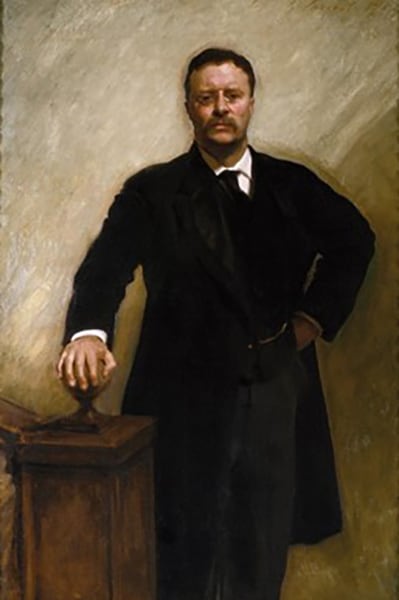 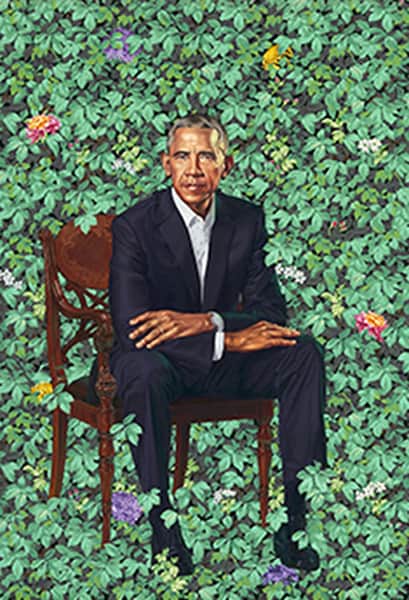 “Oracle,” the new statue in Rockefeller Plaza, has the same effect. It cheapens the other art in the plaza. If a white person had made it, many would call it racist. In Senegal, the African Renaissance Monument is impressive, but “Oracle” looks like a deliberate insult.

What was the intent? Sculptor Sanford Biggers explained that he drew on the Art Deco tradition of Rockefeller Center and intended to complement Zeus, Prometheus, and Atlas. Adding African elements, he says, is “sort of completing the rest of the story.” The setting, he says, is an “ideal context for myth creation.”

Rockefeller Center is an important cultural center. The previous sculptures celebrate what we could call Faustian man. We have literal gods harnessing modern science (radio waves, television, engineering) to remake the world. Christians might argue the imagery is Luciferian — celebrating man becoming god. However, all would agree that the symbols are triumphal and celebrate accomplishment and power. The interior paintings are also of strength and upward striving.

The gods and men at Rockefeller are doing things: building skyscrapers, conquering the heavens, holding up the Earth. The “Oracle” sits and scowls. Soon, visitors will be able to use a QR code to ask it questions and celebrity voices will answer. That’s not inspiration or heroism; it’s entertainment. We should see this as part of an effort to turn away from the classics and loosen the connections whites have to their own past.

The “Art Production Fund” commissioned the statue. It is run by three white women, who say that are “reaching new audiences and expanding awareness through contemporary art.” Real estate firm Tishman Speyer supported the exhibit. On its website, it brags about its commitment to ESG (environmental, social, and government) principles.

Real estate developer Aby Rosen and his wife Samantha Boardman also backed it. In 2008, New York Magazine called Mrs. Boardman a “society princess,” and in 2013 The New York Times called her “a pillar of New York society.” Another supporter was the Marianne Boesky Gallery. On its webpage is an emotional letter saying in all caps that BLACK LIVES MATTER. It also invokes Breonna Taylor, George Floyd, Trayvon Martin, and others. The gallery promises to “support the Black community, POC, and all other marginalized groups” and to “fight for racial justice.”

Sarah Arison, president of the Arison Arts Foundation, also supported the sculpture. Her grandfather founded Carnival Cruise Lines. Family wealth presumably put her on the board of “Americans for the Arts,” which promises to achieve “cultural equity,” by fighting “existing systems of power [that] grant privilege and access unequally.”

The statue is backed by what Tom Wolfe called the “Masters of the Universe.” The message they and the artist are sending is that greatness is for the past. Instead of admiring accomplishment, we celebrate victimhood. Instead of creating beauty, we build things that degrade their surroundings. Instead of furthering a tradition, we uproot it. The wealthy, well-connected, and powerful push “equity” while they wallow in luxury.

Luckily, “Oracle” will be in Rockefeller Plaza only through June 29. Unfortunately, those who made it possible will stay in power. Every society has an elite, but it’s incidents like this that make it clear we need to replace them. Until we do, they’ll keep funding “art” like this while they tell us we have privilege. I don’t think its celebrity-voice “prophecies” will say anything useful. If you want to know why the country is dying, you’ll have to turn to us.