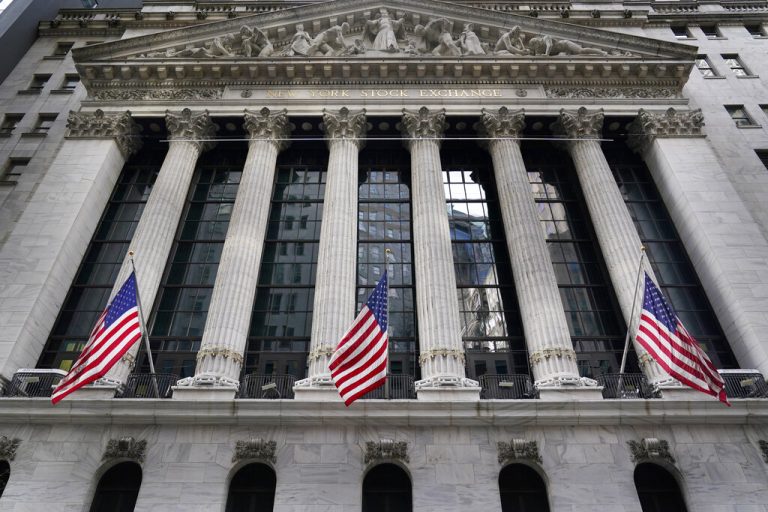 The selling came as investors reacted to a surprisingly big jump in inflation last month that stoked concerns that the economy may bounce back too fast from its pandemic-induced doldrums.

Tech giants, which had soared during the past year of lockdowns, took some of the biggest losses. Only energy stocks eked out a small gain.

Bond yields snapped higher after the government reported that consumer prices rose 0.8% in April, more than expected, and prices rose year-over-year at the fastest rate since 2008.

The yield on the 10-year Treasury note rose to 1.69% from 1.62% a day earlier, a big move. Bond yields rise when investors fear that an increase in inflation will erode the future value of the income that bonds pay.

“Inflation and interest rate jitters are hitting the market today, but for now the sell-off has been orderly,” said Cliff Hodge, chief investment officer for Cornerstone Wealth. “Letting some air out of these sky-high valuations is a positive going forward.”

Inflation concerns have been hitting the stock market hard this week. The S&P 500, Nasdaq and Dow are on track for their biggest weekly loss since Oct. 30. The Dow and S&P 500 had set all-time highs just last Friday.

Investors have been worrying that inflation could return after being absent for many years as the economy revs out of the recession brought on by the pandemic. Federal Reserve officials and other economists have said moderate inflation may actually be a good thing in a recovery.

While the latest reading on inflation was hotter than expected, the market shouldn’t be too surprised about inflation rising, said Jeff Buchbinder, equity strategist at LPL Financial. The prevailing sentiment is that rising inflation will be temporary, though “it’s too early to say whether these higher levels are going to be sustained,” he said.

The surge inflation is a reflection of the pent-up demand in the economy, said Terry DuFrene, global investment specialist at J.P. Morgan Private Bank.

“This is not a repeat of the 1980s, when we had hyperinflation,” he said. “This is not something that’s going to be permanent.”

Concerns about rising inflation also raise the question of whether the Federal Reserve will change its posture on maintaining low interest rates as the economy recovers. Buchbinder said investors shouldn’t expect that to happen any time soon, however, given that the economy, and particularly the job market, are still a long way from being fully recovered.

“Really the Fed has one mandate right now, which is to regain full employment, and it’s going to take some time,” Buchbinder said.

Analysts expect consumer prices to rise as the economy recovers, but higher prices could run the risk of curtailing some spending, which the economy needs to sustain its recovery. The cost of new cars rose 0.5% in April, the largest increase since last July, because of heavy demand and a computer chip shortage that has slowed production and reduced dealer supplies.

Tesla fell 4.4%, bringing its pullback so far this month to nearly 17%. That has the electric car maker’s stock on pace for its worst month since the pandemic plunge of March 2020, when it lost 21.6%.

Energy prices continued to climb following the shutdown of a major gas pipeline on the East Coast earlier in the week, and there are now reports of gasoline hoarding happening in places like North Carolina.

PrevPreviousFormer Attorney General Tom Horne to Speak in Prescott
NextEXPLAINER: With bankruptcy tossed, what’s next for the NRA?Next