The D.C. Statehood Bill is Unconstitutional 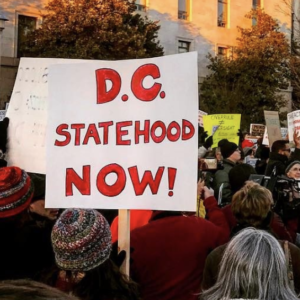 The White House recently issued a statement endorsing a bill that would grant statehood to Washington, D.C.  It said, “For far too long, the more than 700,000 people of Washington DC have been deprived of full representation in the US Congress. This taxation without representation and denial of self-governance is an affront to the democratic values on which our nation was founded.”

The bill, H.R. 51, takes a scalpel to D.C. and cuts away certain federal buildings such as The Capitol, The White House, and the Supreme Court, as well as other federal buildings and monuments and sets those areas aside as “the seat of government.”

Meanwhile, the populated areas of D.C. would become a 51st state called “Washington Douglass Commonwealth” which would receive one representative in the House, two Senators, and all the other benefits of statehood. On top of those benefits, the seat of our federal government would be located entirely within that state’s borders.

The bill carves up D.C. like a Thanksgiving turkey in a desperate attempt to remain consistent with the U.S. Constitution, but it fails miserably in two separate ways: It directly violates one clause of the Constitution and grotesquely reimagines the 23rd Amendment.

Among the powers of Congress enumerated in Article 1, Section 8 is the power “to exercise exclusive Legislation in all Cases whatsoever, over such District (not exceeding ten Miles square) as may, by Cession of particular States, and the Acceptance of Congress, become the Seat of Government of the United States.”

The clause is written in future tense because none of this had come to pass yet when the Constitution was originally ratified. In 2021, however, the creation and acceptance of the District and the cession of land has already happened. And, as required by the Constitution, the federal government took authority over it. They have no constitutional power to now hand over that authority to any other entity including a state government.

Aside from that direct violation of the Constitution, the bill would also render the 23rd Amendment obsolete.

The amendment states that “The District constituting the seat of Government of the United States shall appoint in such manner as the Congress may direct: A number of electors of President and Vice President equal to the whole number of Senators and Representatives in Congress to which the District would be entitled if it were a State.”

Fully aware of H.R. 51’s anti-constitutional nature, the bill’s creators included an entire section that expedites the ratification of a new amendment to cancel the 23rd Amendment. Canceling it would fix the horrendous electoral paradox the bill causes, but it’s absurd to think Congress can pass legislation that gives Americans an IOU for the amendment which would make the legislation constitutional.

The Biden Administration is correct that people who pay federal taxes should not be unrepresented in Congress, but there is a solution that doesn’t thumb its nose at the constitution. A simple constitutional amendment that grants D.C. representation in the House would be widely supported and solve the problem.

Instead, President Joe Biden and Congress want to force a solution on us that requires an ex post facto amendment, directly violates the District Clause, and creates a super-state that exclusively holds the seat of government.

Eddie Zipperer is a political columnist and Assistant Professor of Political Science at Georgia Military College. He wrote this for InsideSources.
All Posts »

2 thoughts on “The D.C. Statehood Bill is Unconstitutional”