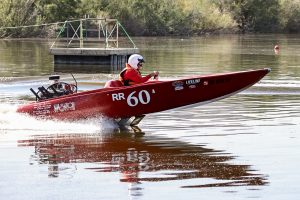 When the drag boat racers arrive, however, it is a place bustling with activity and entertainment and has become a popular destination for the sport’s competition in the desert.

Hidden Lake is home to many events put on by the Arizona Drag Boat Association, which feature intense quarter-mile races with speeds hitting close to 200 mph.

In 2020, because of the COVID-19 pandemic, the ADBA held only two events, including one at Hidden Lake. So far in 2021, the ADBA has hosted three races there, most recently the Spring Shootout on April 2-4. Three more are scheduled for Buckeye as well.

Each event takes place from Friday to Sunday. Friday is used as a testing and tuning day for the racers, who take advantage of their practice runs to make adjustments for the weekend, when the competitive races begin.

“What works in Kentucky for their boats may not work here,” Todd said.

Saturdays are qualifying days. Based on their best times, drivers are ranked and seeded, and they are put against other drivers, similar to other tournament brackets, with the top time matching up with the lowest time.

On Sunday, those pairings are put into a traditional tournament bracket for each class of boats, with the winners of each race moving on to the next round until a champion is crowned.

The racers are a close-knit group. Many even travel across the country to participate in other drag boat racing association competitions as well when Buckeye is not hosting any racing.

“They hate each other from 8 o’clock to 5 o’clock, but after that they are buddies again,” Todd said. 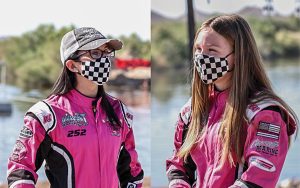 The Scribner family of Lake Havasu city has two racers with the ADBA, sisters Tanya and Tara. Their grandparents drove drag race cars, and when Tanya tried racing a boat, she was hooked. A few years later, younger sister Tara rode along with Tanya and also was hooked.

Often, the two sisters will find themselves racing each other, which leads to a unique sibling rivalry.

“It’s extremely competitive … but it’s fun when you get to race your sister,” Tanya, 32, said.

At the Spring Shootout, the Scribner sisters were two of only three females racing, and for Tara, being one of the only women competing is a sense of pride, especially when she sees little girls watching.

“I like seeing little girls coming up to me and saying they want to race now because they see I do it and my sister does it so I feel like it helps inspire kids to get into this,” Tara, 19, said.

For those interested in racing, Todd said the process includes registering as a member with the ADBA and having the boat scrutinized for safety.

The Scribners both said that anyone can participate and that the community is very welcoming and helpful to those who want to try it.

“Anybody who has a boat can come out and race, that’s the great thing about this organization. Anybody can do it,” Tanya said.

For those interested in just watching, fans are currently welcomed in limited numbers, and the atmosphere provides activities for all ages.

“(TopWater) Cantina here is real family friendly,” Todd said about the dining area at the lake that offers a variety of food and drink options.

Todd applauded the work that club president Jeremy Denny has put in to make Hidden Lake a spot where drivers want to come out and compete.

“If you were here last year, you wouldn’t have recognized this place,” Todd said. “They’ve really done a nice job.”

Some of the changes included adding turf areas, moving the track, moving dirt and adding water.